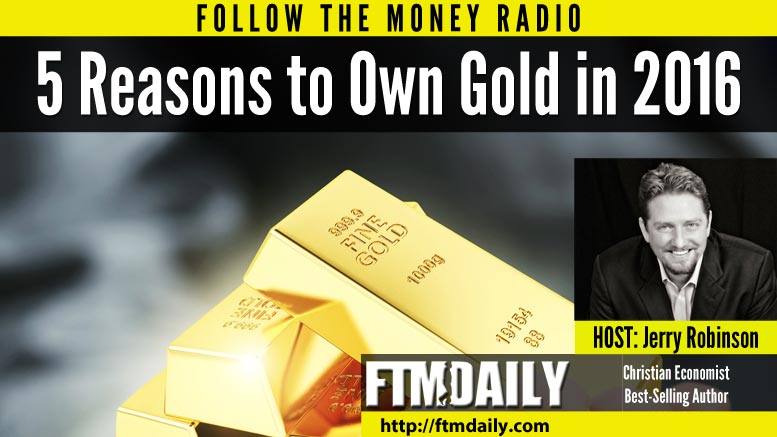 PODCAST: 5 Reasons To Own Gold in 2016
Welcome to this week’s edition of Follow the Money Weekly Radio!
On this week’s broadcast, Christian economist Jerry Robinson provides five compelling reasons to own physical gold in the financially treacherous year of 2016. Plus, an update on the precious metals market with Tom Cloud.

5 Reasons I Own Gold

Many of you know that I have been talking about the benefits of owning gold for as long as this podcast has been in existence. I still hold to the belief that gold, along with other tangible assets, will be the primary beneficiary of America’s economic woes.

Here are five reasons why I own physical gold today, and for the long-term.

For millennia, humans have considered gold as the ultimate store of value, unit of account, and medium of exchange. In other words, gold has long been viewed as money. No amount of paper money can change this fact.

In recent years, mankind has foolishly believed that paper currency, issued by government fiat (decree), somehow has the innate ability to replace other historical forms of money (that boast intrinsic value.) This is a grave mistake and will ultimately drive the global economy — perhaps one nation at a time at first — back to a sound monetary standard, such as gold.

Gold has essentially kept its value over decades and centuries of time. For example, one ounce of gold was worth about the cost of a very nice suit in the early 1900’s, and the same holds true today. (Compare this to the U.S. dollar, which has lost about 95% of its purchasing power since the early 1900’s.)

Because gold exists in finite supplies (as opposed to fiat paper currency like the U.S. dollar), its value cannot be derived by a simple government edict or decree. Governments may try to manipulate the price of gold, but the breakdown of the Bretton Woods Agreement in 1971 proves otherwise. In contrast, modern paper currency has no intrinsic value. The only difference between a $100 bill and an old piece of worthless paper is that the government says that the $100 bill has value. But this value is not intrinsic, meaning that the $100 bill does not hold value in and of itself. Similar to an old piece of scrap paper, its only use is perhaps fire kindling. Government cannot perpetually confer value on mere pieces of paper and expect to have a sustainable economy and monetary system.

#3 – I Do Not Trust the U.S. Federal Government

I do not trust the federal government or the monetary wizards at the Federal Reserve to protect my family from a hiccup in the global fiat currency system, let alone total economic disaster. By owning and holding physical gold, I am able to insure myself against Washington’s numerous inept policies.

Paper money is a modern experiment which is ultimately headed for a solid brick wall. There are already growing movements around the world to restore gold as money and to allow gold to once again play an integral role in national monetary policy. No matter what Washington says, the U.S. economy faces tremendous hurdles as we move into the future.

Here are just a few of the major hurdles facing the U.S. economy:

According to recently released Federal Reserve data, the average 65-year-old borrower has 47% more mortgage debt and 29% more auto debt than 65-year-olds had in 2003, after adjusting for inflation. Just over a decade ago, student debt was unheard-of among 65-year-olds.

Another report, released by Bankrate.com, shows that more Americans are one paycheck away from financial disaster. According to the report, approximately 63% of Americans have no emergency savings for things such as a $1,000 emergency room visit or a $500 car repair. Faced with an emergency, they say they would raise the money by reducing spending elsewhere (23%), borrowing from family and/or friends (15%) or using credit cards to bridge the gap (15%).

According to the U.S. Census Bureau, more than 46 million Americans live at or below the poverty line.

Imposing strict fiscal constraints upon — or shutting down — the growing network of global central banks and their insidious usage of fractional-reserve banking may be among the few solutions left to citizens who seek to stop exploding government debt levels. If the monetary madness that affects nations around the world is not stopped and course-corrected by the citizenry, its inevitable consequences will be severe inflation, followed by a sharp and contracted period of deflation.

It’s no different with gold, and the entire financial planning world for that matter. The wealthy elites own gold along with a myriad of other tangible assets while telling America’s working poor (middle class) to “buy term and invest the difference.” By investing the difference, they are referring almost exclusively to U.S. stocks, and preferably high-load mutual funds. It’s a scam.

Don’t misunderstand me. I like stocks and own them. I just do so in moderation. (More on that in #5.)

With today’s out-of-control levels of counter-party risk, I like that my gold is no one else’s liability. There is no claim on my gold. No one can purchase a derivative on the physical gold in my possession.

Many of you have probably heard of my Diversified Six-Month Liquid Savings (DSL Savings) plan. If not, you can learn more about it here. Basically, I use gold (and silver) not only for my long-term holdings, but also as a part of my short-term liquid savings reserve.

I believe in being spread out in my savings due to the eroding factors on money, including inflationary pressures. Although gold and silver play an important role in my own personal financial holdings, I remain balanced. I refuse to hold more than 25% of my assets in precious metals. In addition to precious metals, I utilize real estate, stocks, and my own businesses to diversify my overall investment portfolio.