Weekly Metals Report: Is the Bottom In?

Welcome to Follow the Money’s Weekly Metals Report for the week of September 4th!

The metals appear to be finding a floor, after a dismal jobs report on Friday led to the market realizing what most of us here have been expecting all along; no rate hike until at least December.  That forecast is not based on wild prognostication, but on weak economic data, lower than expected jobs numbers, inflation below “target” (using Gvmt numbers, not actual inflation), and the logical assumption that the Fed does not want to risk a sharp downturn before the election.  After Friday’s report, commodities popped and the metals surged.  Interestingly, the dollar rose in conjunction with the metals and commodities.  The weekly lows in the metals coincided with support levels mentioned in previous weeks; $18.50 and $1308, respectively.  While bouncing off of key support is encouraging, the volume was not overly impressive.  More on that in the charts below.

So, does this mean we’re all clear and it’s time to back up the truck?

Prudence is warranted as several overhead resistance levels still need to be to be cleared.  As traders and investors, it serves us well to have a firm grasp of both the bull case and the bear case.  While certainly not a prediction, it’s very possible that some “positive” data could be released in the weeks ahead that gives the Fed cover to continue talking about a rate hike.  Remember, good data helps the political establishment and there is ample incentive to “massage” the numbers.  How long will the market continue to pay attention to Fed jawboning?  Nobody knows that for sure, but monitoring price and volume, in response to their prognostications, will give the best indication as to when they begin to lose whatever credibility remains.

My personal strategy is to dollar-cost average into physical gold and silver each month, regardless of the price.  That’s an insurance policy.  I like to add mining stock positions on steep pullbacks in the context of a longer-term uptrend – as is the case now- while keeping some dry powder in case the selloff continues longer than anticipated.

Below is a brief synopsis of several stories that expand upon some of the trends being tracked at Follow the Money.

I hope I don’t come off as overly cynical in these brief commentaries.  The way I see it is that you can either become overly bitter [I’ve been there!] or you can remain vigilant while simultaneously having some fun pointing out the excessive tomfoolery.  That said, if you lost your job recently, sarcastic comments about Friday’s jobs numbers may seem callous.  I am truly saddened by the current state of affairs and thankful that my ultimate hope is not in any political leader, central bank policy, or even precious metals.  My intent is to strike a healthy balance, as these are certainly serious issues that will have lasting effects. 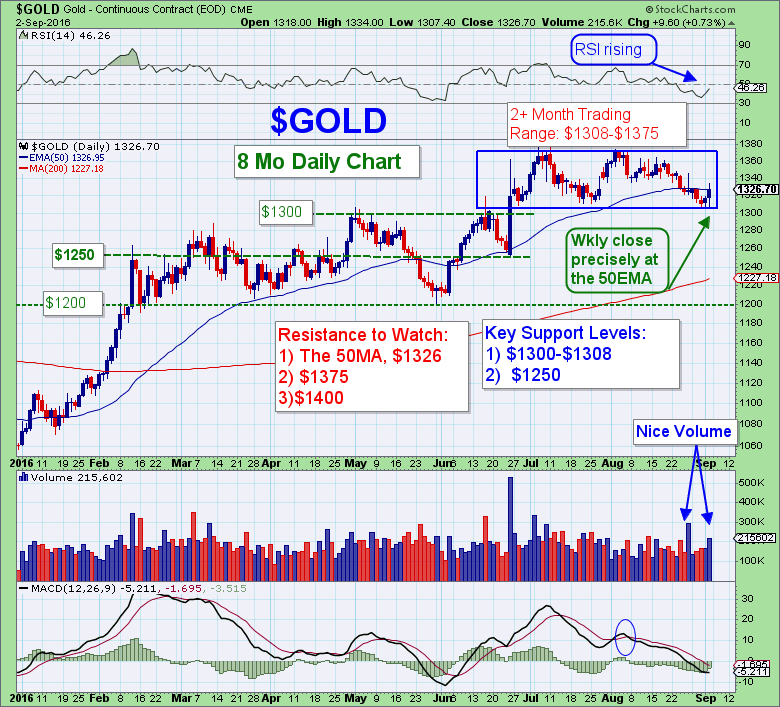 Gold closed the week just pennies below its 50MA, remaining within the confines of its several-month trading range.

The short-term trend is attempting to reverse, but getting above $1340 and $1375 remain near-term obstacles.  The long-term and intermediate trends remain up and firmly intact.

The $1308 floor also held as support several times this week.

The charts indicate there’s likely to be more upside to this move.  The big question is whether there will be enough momentum to clear the top of the respective trading ranges. 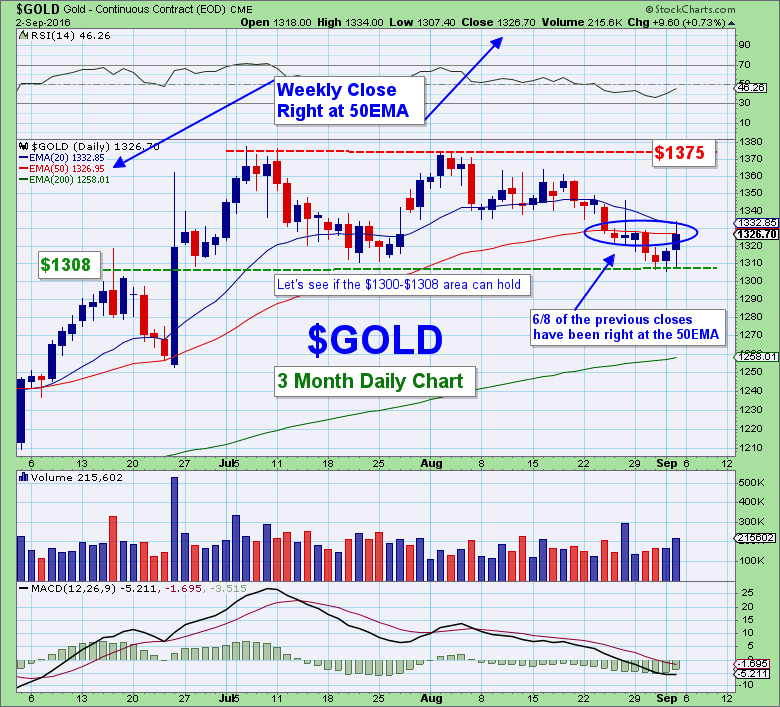 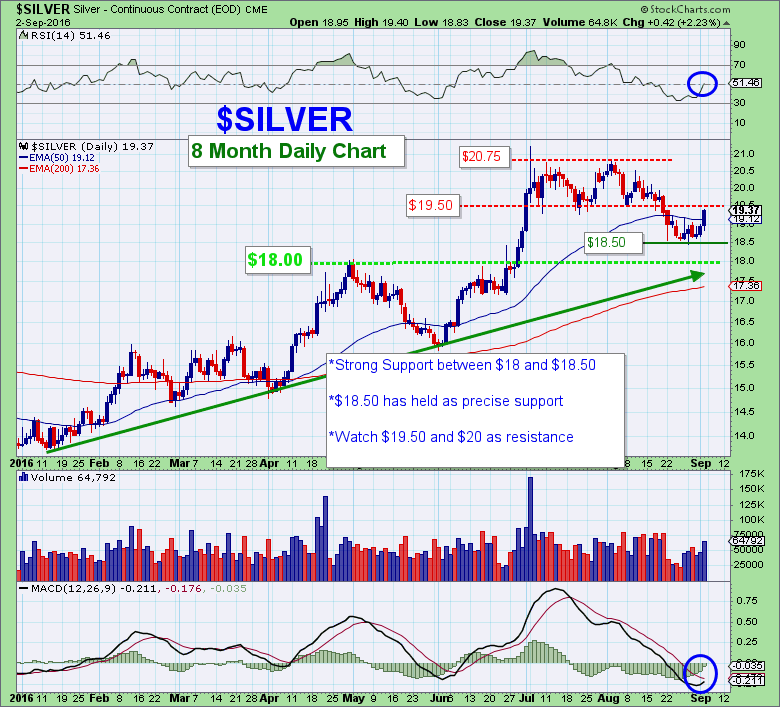 The critical $18.50 held strong this week, with price testing that level on several occasions.  Should $18.50 give way, there is very solid support at $18.

RSI and momentum are turning up.  If I were short the metals or miners and came home from work Friday to see these charts, I would be inclined to cover on Monday. 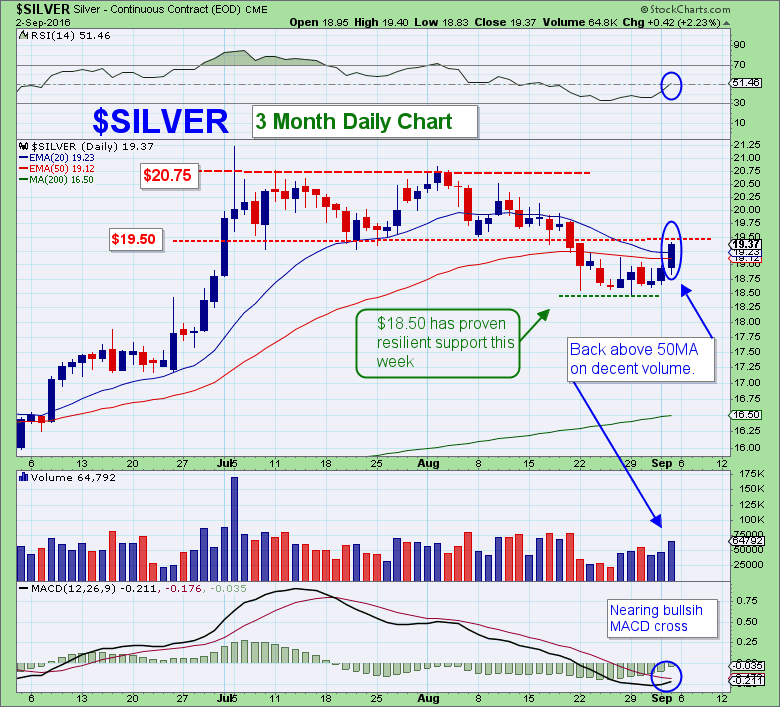 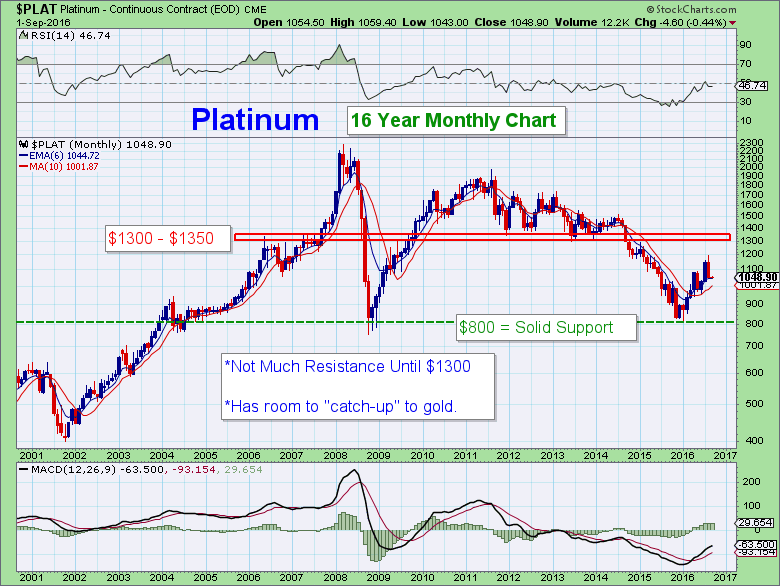 On the long-term chart above, you can see that once a major uptrend gets underway in Platinum, it tends to run for quite some time and make very large percentage moves.  The charts indicate that we are likely just entering the early stages of a new major uptrend.

Fundamentally, the case for both platinum and palladium is extremely compelling.  Potential supply shortages loom. As a primary component of automotive catalytic converters, latent demand driven by millions of new drivers in China and India should serve to increase demand just as future supplies are likely to come under pressure.

Platinum typically carries a premium to gold, but currently trades at a $275 discount.  Look for platinum to play “catch-up” at some point. 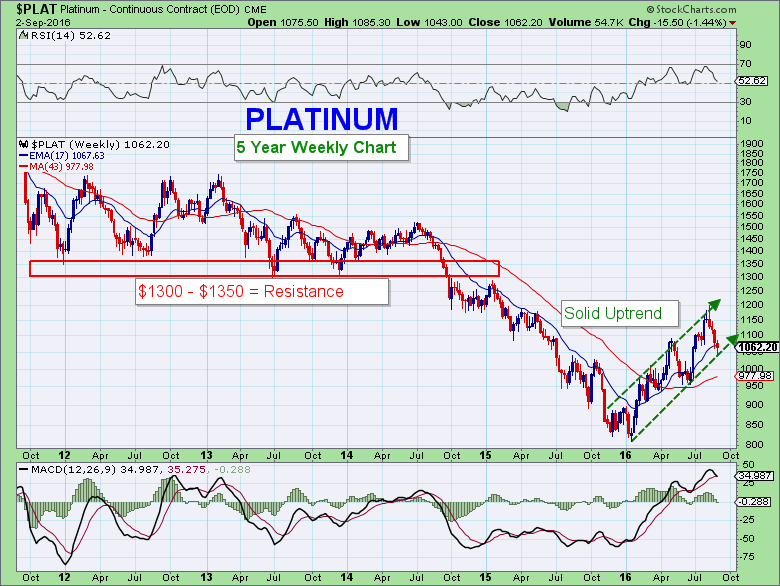 Platinum is in a confirmed uptrend, oversold on its RSI and just below the 50MA.  Combined with its solid fundamentals, this looks to be a compelling entry point, with an appropriate stop loss.  The 200MA is $31 below the current price, a line where institutional money often bails if breached to the downside.  PPLT is one way to play the platinum market.  SPPP is a closed-end trust that invests in physical platinum and palladium bullion, although volume is low. 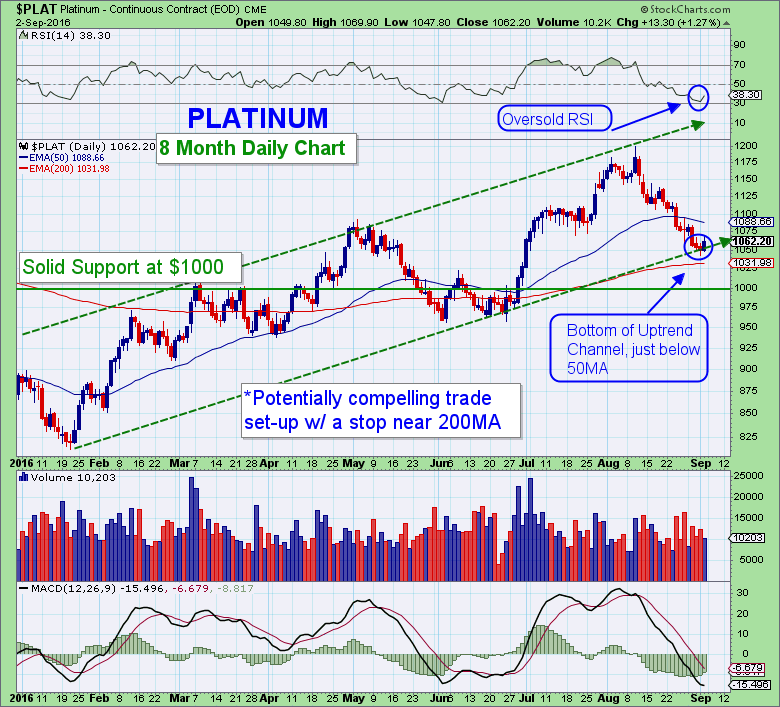 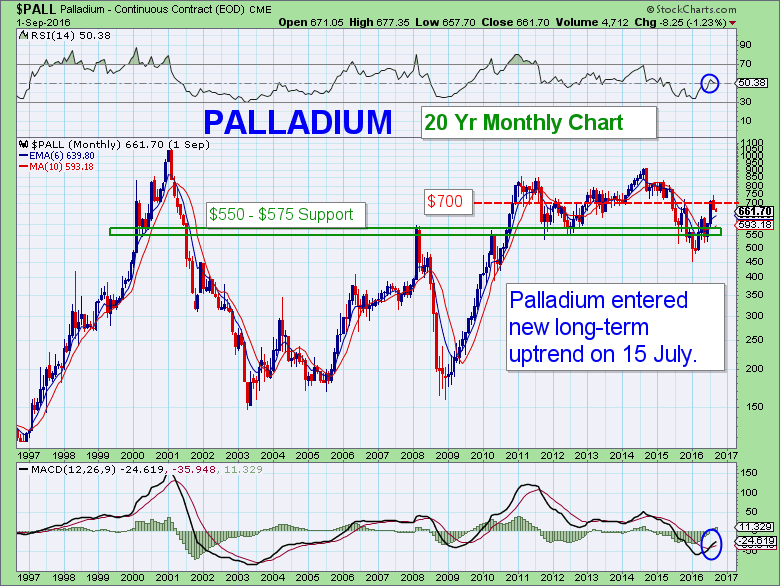 Palladium has a very similar fundamental story as platinum, but is even more volatile.  As you can see on the chart above, palladium climbed almost 11-fold in just 4yrs from 1997 to 2001 and has had several other big moves as well.  That volatility works the same on the downside, so exercise caution if trading palladium.

FTM called a long-term uptrend in platinum on July 15th and the metal is currently experiencing its first meaningful pullback since then.

Resting just above its 50MA and about 8% above an up-sloping 200MA, palladium is presenting a potentailly compelling opportunity. 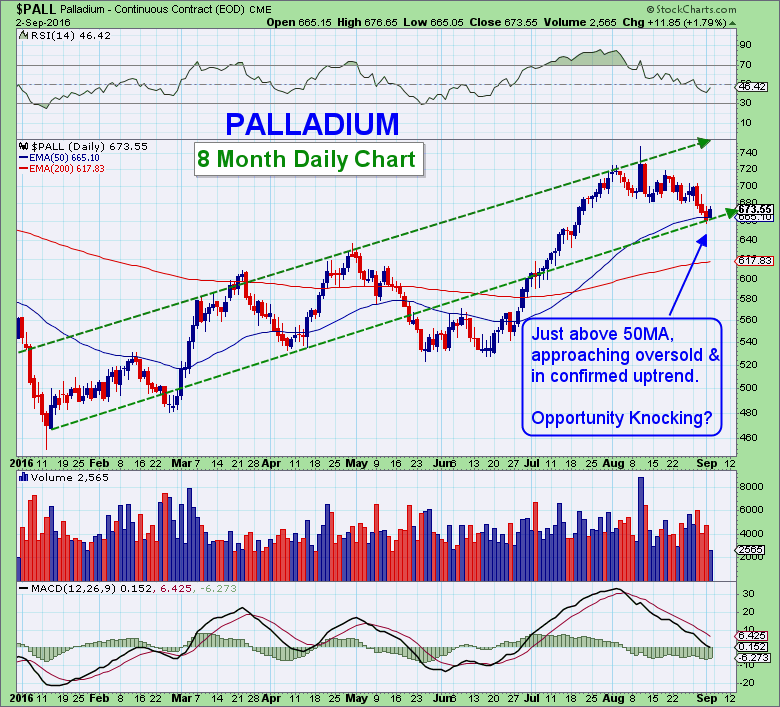 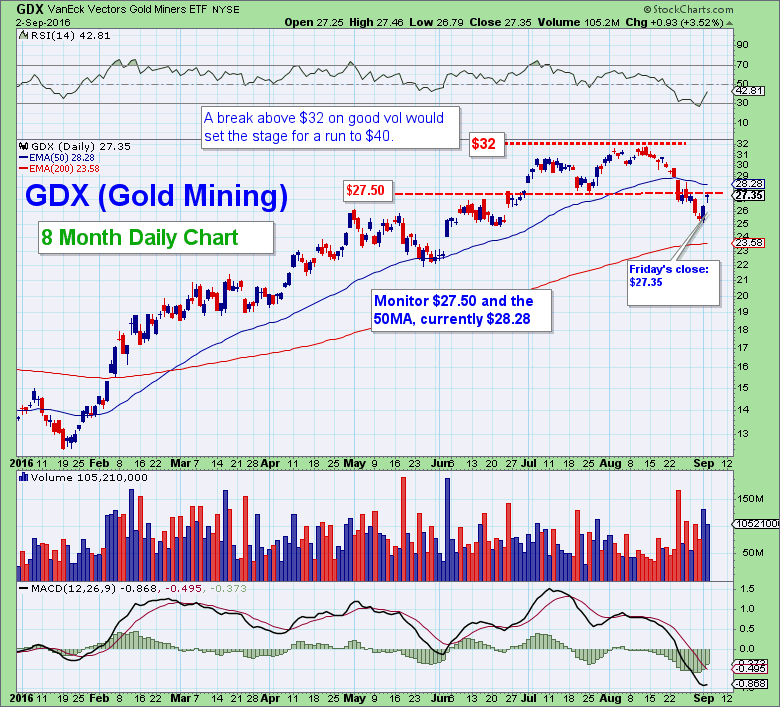 The mining stocks are showing signs of reversing after experiencing the deepest correction since breaking out of a brutal downtrend in January.

RSI and momentum are beginning to turn back up.

On the upside, watch for a break above $27.50 and the previous high of $32.  That would set the stage for the next surge higher. 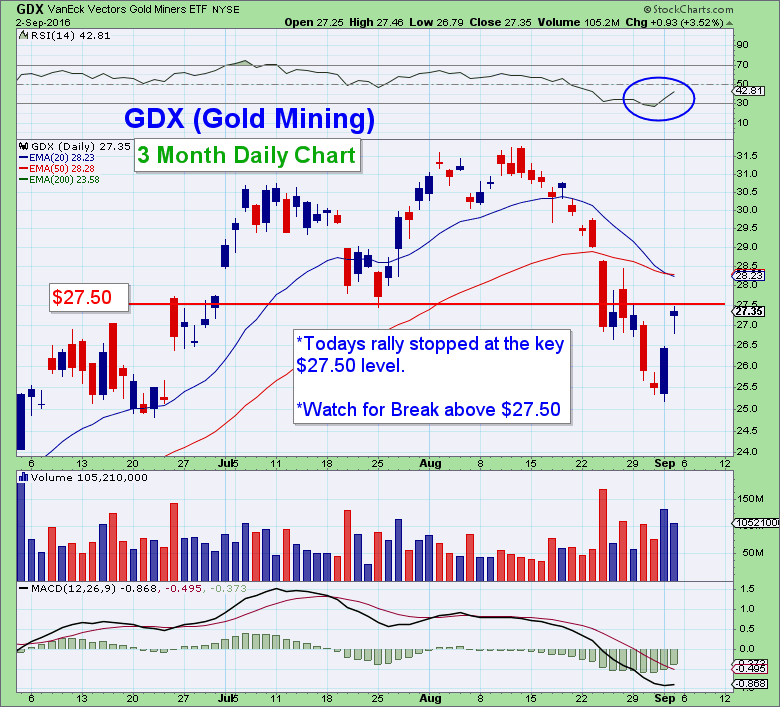 Friday’s 5% surge took SIL back above the very important $45 level.  Note the significance of $45 on the 5-yr weekly chart above.

The rally on Friday was stopped at the 50MA precisely.  Clearing that will be the first hurdle, followed by $50.50 and then the previous high of $55. 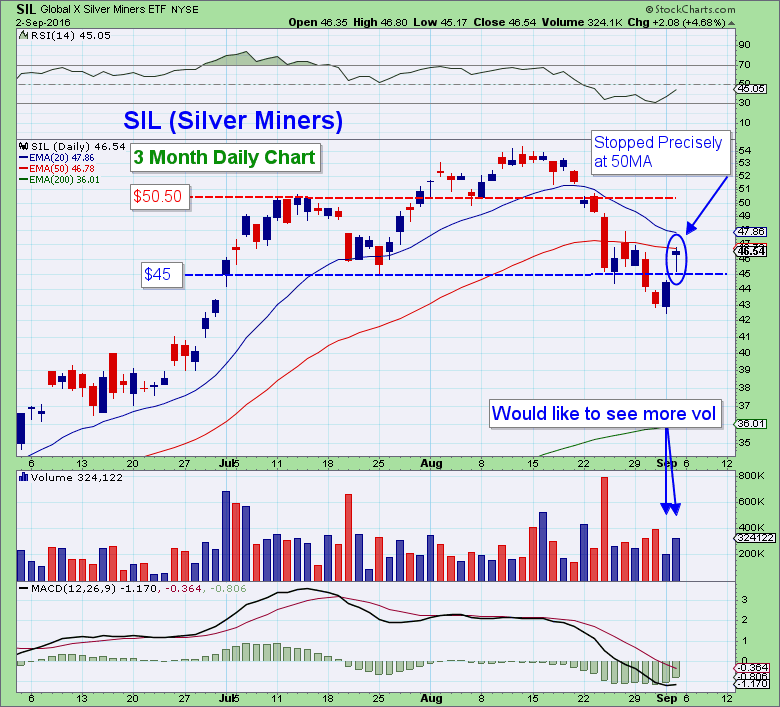 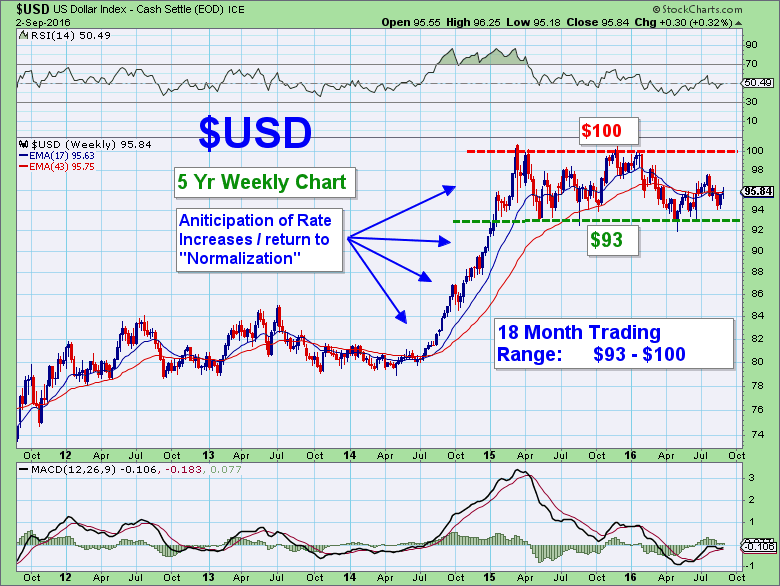 Each week I’ll be including one of the charts from Follow the Money’s P.A.C.E Portfolio. 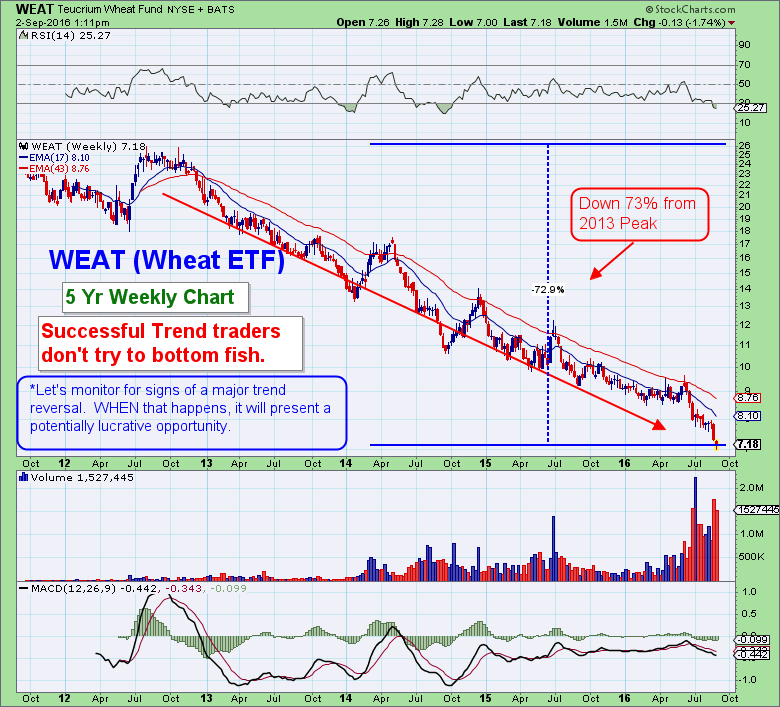 Here’s what I know about wheat:

I’m intrigued by anything that’s down 75%, but FTM members know that it’s often hazardous to your financial well-being to bet against the trend. I’ve learned that the hard way.  Let’s watch for signs of a trend reversal. The Trigger Trade Pro system is designed to identify the early stages of new uptrends.  The Weekend Briefing, as well as twice-weekly conference calls, will also alert members when both the intermediate and long-term trend has changed.

In gold, the commercial net short position fell by 16,262 contracts and stands at a total of 30.12 million ounces.

So, back to the original question from the title.  Is the Bottom in?

As Jerry Robinson often says, “My crystal ball is broken.”  If his is broken, mine is smashed to pieces and I was never able to get that thing to work properly in the first place.

The strong rallies on Thursday and Friday were encouraging signs of a reversal.  This rally likely has room to run further. The big question is whether it will be able to breach the top of the recent trading ranges; $1375 and $20.75, respectively.  Breaking above these will set the stage for the next surge higher.

Both gold and the mining stocks are each still below their 50MA.  Silver is above its 50MA by a whisker.  The silver and silver miner rally was on less than impressive volume.  Gold and GDX had fairly strong volume, but not the >1.5x normal volume that would be preferred.

The commercial banks remain massively short both gold and silver.  It’s kind of like knowing there’s a thief lurking around your neighborhood at night.  He might not come rob you blind, but you know he’s out there looking to plunder.

Meanwhile, we’re entering a seasonally strong period for the metals.  Historically, September is the best performing month, followed by January and October.

I’m cautiously optimistic shorter-term and extremely bullish over the long-term.

I hope you all have a great week and look forward to “seeing you” back here next Monday.

“Some trust in chariots, and some in horses;
But we will remember the name of the Lord our God” (Psalm 20:7)

“During my eighty-seven years I have witnessed a whole succession of technological revolutions. But none of them has done away with the need for character in the individual or the ability to think.” – Bernard Baruch

“Don’t try to buy at the bottom and sell at the top. It can’t be done except by liars.”  – Bernard Baruch