What a Hamburger Can Teach Us About the Coming Dollar Collapse

(This is part 2 of our article series about the Petrodollar System. To read part one, click here.)

Today, the world is consuming more than 86 million barrels of oil each day. And with each barrel of oil sold, more demand for U.S. dollars is created. What kind of effect do you think that this consistent demand for the U.S. dollar has on the U.S. economy? Based upon the benefits I have described in my last piece, we can probably agree that the effect is much more positive than negative.

To better understand the power of the petrodollar system and how it greatly benefits the U.S., I often use an illustration.

My point is that the more demand for your goods or services, the better off you — and your hamburger stand — will be financially.

But more importantly, more demand for your product provides you with a permission slip to hire more workers, to expand your business, etc.

Friends, the very same thing is true for currencies, like the U.S. Dollar. If a nation can develop demand for its own currency outside of its borders, then it has a permission slip to create more of the currency. And when more of its currency is in circulation, the standard of living is generally higher for that nation. This is all simple monetary economics 101.

More money in circulation leads to an expansion of the monetary base. And a larger monetary base typically means a higher standard of living – assuming that the demand for the currency and for the debt securities remains strong.

This last point is extremely important. For if the petrodollar system were ever to crumble, America would be stuck with a whole lot of extra U.S. dollars that are no longer in demand. Those dollars would then naturally find their way back to America which would ultimately lead to massive inflation.

One of the warnings that I have been issuing for years is that America’s petrodollar system, while brilliant and lucrative, will eventually breakdown. And when it does, it will lead to the absolute destruction of the U.S. Dollar as the global reserve currency.

So, how is the petrodollar system doing currently? Is it presently endangered?

Since 1980, America has devolved from being the world’s greatest creditor nation to the world’s great debtor nation. But thanks to the massive global demand for U.S. dollars and government debt made possible by the petrodollar system, America is able to continue its spending binges, imperial pursuits, and record deficits. Modern-day America is living proof that having the world’s most important currency translates into a higher standard of living than most nations.

How long before the nations of the world figure out the dollar fiasco is a fraud?

Instead of viewing U.S. dollars as worthless paper backed by nothing (as they should), foreign oil producers and consumers have been convinced – and even required – to hold U.S. dollars in order to make oil transactions. However, this demand ‘at gunpoint’ is not genuine; rather, it is purely artificial. If left to the power of the free markets, an alternative would arise naturally and quickly. It is my forecast that over the next several years it will become obvious to all that the petrodollar system is completely unsustainable.

Dr. Bulent Gukay, of Keele University, puts it this way: “This system of the US dollar acting as global reserve currency in oil trade keeps the demand for the dollar `artificially’ high. This enables the US to carry out printing dollars at the price of next to nothing to fund increased military spending and consumer spending on imports. There is no theoretical limit to the amount of dollars that can be printed. As long as the US has no serious challengers, and the other states have confidence in the US dollar, the system functions.”

I will save my answer to that question for an upcoming article.

Tomorrow: More on the coming breakdown of the U.S. Dollar and why it matters…

1. GOLD STANDARD: Billionaire Steve Forbes is predicting a return to the gold standard in the United States within the next five years.

2. DIVIDEND HIKE: The world’s largest chipmaker, Intel, has announced a 16% increase in its dividend. This is the company’s second dividend increase in the last six months.

5. INSIDER TRADING: Raj Rajaratnam, the hedge fund boss accused of insider trading, was found guilty Wednesday by a federal jury in New York of conspiracy and securities fraud. He could face up to 20 years in prison. 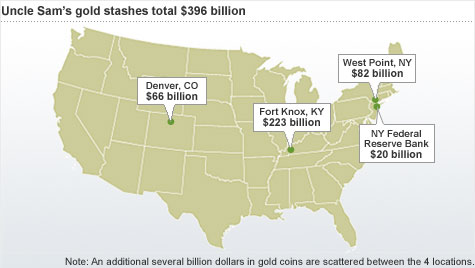