by Jerry Robinson
FTMDaily.com – Despite years of economic “pep” talks by the political windbags that carouse the streets of Washington D.C., the facts remain clear. (Stubborn things, those “facts.”) Put simply, the U.S economy is bankrupt. 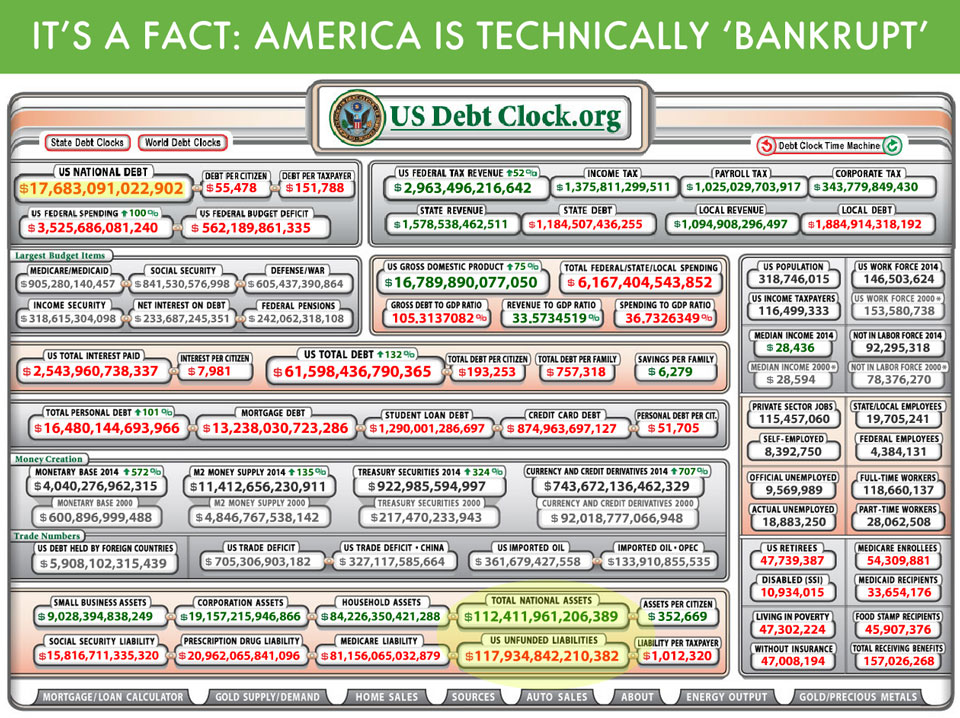 The answer: America is still left with a deficit of $5.5 trillion!

But our nation’s lack of sound financial stewardship has not just devastated our government… It has decimated our citizens.

Do you think that number has gone down since 2012?

82,679,000 of the welfare-takers lived in households where people were on Medicaid, said the Census Bureau.

20,355,000 were in households on Supplemental Security Income.

“When those receiving benefits from non-means-tested federal programs — such as Social Security, Medicare, unemployment and veterans benefits — were added to those taking welfare benefits, it turned out that 153,323,000 people were getting federal benefits of some type at the end of 2012.”

Considering America’s 309 million citizens in late 2012, this means that one out of every two American citizens is getting a check from the U.S. Federal government!

No amount of monetary wizardry emitting from the Federal Reserve will be able to suspend reality indefinitely.

While I have long been enjoying the rising U.S. stock market (check out our daily stock trading service here), I also know that the ride up will not last forever.

Prepare yourself with wise diversification in your savings, your investments, and your income.

Mankind’s flirtation with fiat paper currency systems throughout history have all ended the same.

Do you think the Federal Reserve is special or inherently any different from the myriad of similar, yet more crude, attempts that failed before it?

It is not immune to the basic laws of economics.

In fact, I think it is fair to say that the Fed’s reputation among future generations will be colored by the institution’s sheer arrogance and mind-numbing levels of hubris. In retrospect, the reason and nature of it’s demise will be openly plain and obvious.

Sadly, the time-tested financial wisdom that occurred naturally to our forefathers has been stifled and distorted by our modern debt-based monetary system…

Listen to the podcast for Jerry Robinson’s full, in-depth commentary.

Other Links of Interest This Week

The seven drivers of the gold price (The Telegraph-UK)

An Update for Precious Metals Investors

Next, Jennifer Robinson is here to update our FTM Insiders on Trigger Trading activity for the past two weeks. We’ve had two stocks stop out since the last update for Trigger Traders: SH for a 2.97% loss and GDX for a 4.77% loss. We currently have 10 stocks in play in the markets! BRCD is up over 7%, MAR is up 2.5%, SIRI is up 2.25% from its trigger price, and WWAV is up over 4%. Three other stocks are up over 2%: UDR, AVT, and NHI. We are looking forward to locking in some of these gains in the coming days. We are still awaiting Jerry’s trigger price on four other stocks.