Because diversification is not just for investments anymore

In Level Three of our Five Levels of Financial Freedom, we teach the need to have six months of liquid savings at all times. (That is, six months of your gross income. If you earn $2,000 per month, you should have $12,000 in extreme liquidity at all times.) However, simply having the savings is not enough. Inflation is a constant threat to your financial plan in any modern fiat monetary system. Since the U.S. government can order the Federal Reserve to print money at any time, you better believe that inflation will continue to pose a hazard to your finances. So if you want to dampen the ravaging effects of inflation that cause a loss of purchasing power on your money, diversifying your savings should be a priority. I call this strategy the Diversified Six-Month Liquid Savings strategy, in short, DSL Savings. 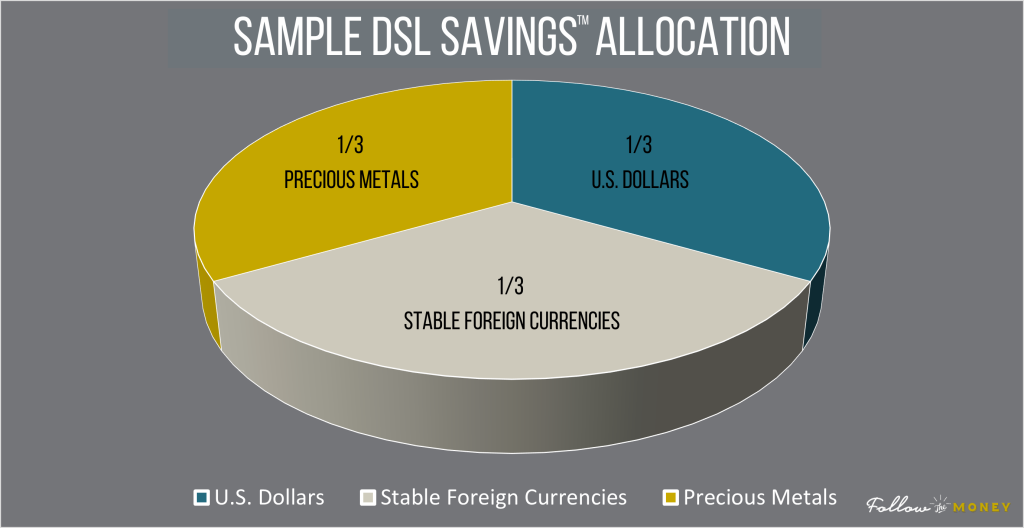 Here’s what your DSL™ Savings reserve is not:

Over the years, I have run into many people who think saving money is a waste of time or that it is unnecessary. These are usually the same people who rely on credit cards when they get a flat tire and who have to pull money out of their IRA or 401(k) when an emergency arises. Usually, these are also the same people who feel that they need to hit a homerun with every single investment. In my opinion, this is a poor lifestyle choice. I prefer to have diversified liquid cash on hand that I can quickly access in case of an emergency or if a great opportunity arises.

Let me make this clear: A lack of liquidity is not an option for the days ahead. You must have access to liquid cash if you are going to create a successful financial game plan.

The Research Behind DSL Savings (Calling All Math Geeks)

The following describes a sample DSL™ strategy. Let’s assume that you earn $30,000 per year. In order to create your DSL savings, you would need to start saving until you have a total pool of $15,000. The DSL allocation looks like this:

While this is only one possible diversification strategy for your DSLTM savings reserve, I have personally found it to be particularly effective in protecting purchasing power. In fact, my organization has commissioned a study to back-test the performance of this strategy using historical data from the past 20 years.

The analysts who performed the test used the sample allocation strategy described above on the following time periods:

The analysts also had a control test for each time period that compared our DSL Saving strategy to a typical savings account. In this control test, the savings were not diversified, but rather all savings dollars were placed into U.S. treasury bills receiving the 3-month T-bill rate. The purpose of the control test was to determine whether a person using DSL™ Savings would have accumulated more money over each time period than a person keeping all their savings in a U.S. dollar-denominated savings account. Our findings were completely stunning. The first results you will see in Figure A.1 represent the control group, which used only 3-month Treasury bills. The relevant measure used in our study was the total return on savings after inflation. Also, all interest earned during a particular year was assumed to be reinvested back into the Treasury bills. The results are shown in the table below.

Notice that the only positive return (10.0%) in the non-diversified savings strategy occurred in the 20-year time period, from 1992 to 2011. But the total return for the other two periods was negative. How can this be if the rate of return for a T-bill was never negative? Simply put… inflation. Inflation is a major eroding factor on money, and although the savings dollars in the non-diversified strategy were earning interest, the interest earned was counteracted by the effects of inflation, which actually caused the purchasing power of the savings account to fall below the original principal amount in real terms.

So how did our DSL™ Savings Strategy hold up under these same back-testing methods? Let’s take a look. This next section of results in Figure A.2 represents the DSL™ Savings allocation model. Remember, the money is allocated three ways according to the following model:

As in the first test, all returns of this separate test were calculated on an after-inflation basis. Additionally, the same time periods used in the control group were used in this test.

To further visualize the difference diversification makes in your savings dollars, we have summarized the results in the graph labeled Figure A.3. 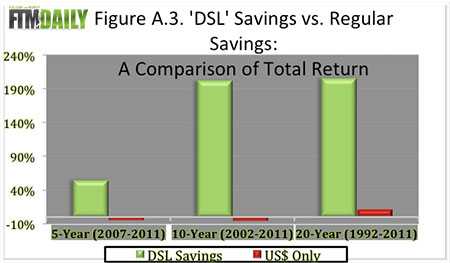 As you can see, the return on DSL Savings™ far exceeds the return for the non-diversified savings in each of the time period studies. In two of the time periods, the non-diversified savings actually loses money (after inflation). Finally, let’s consider the results of the study from one more angle: the total dollar amount accumulated in savings. Check out the charts. 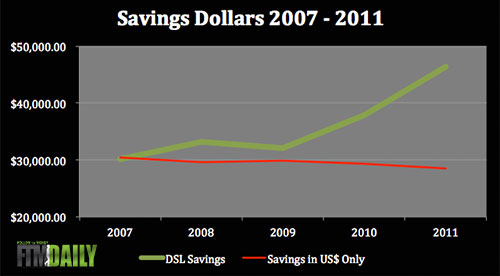 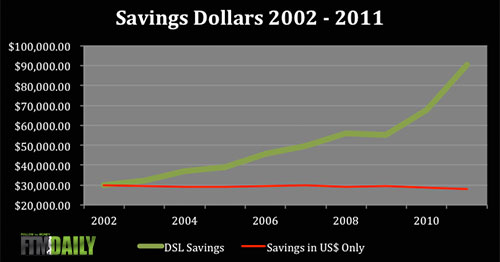 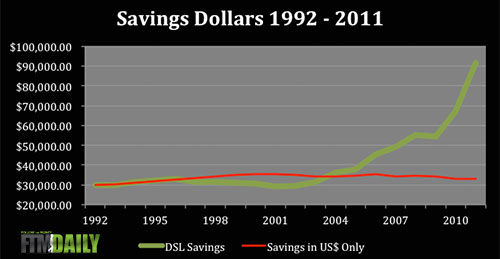 The charts show the total dollar amount in both savings strategies each year over the given time period. The amount in the non-diversified savings remains flat or even drops below the initial amount. Meanwhile, the DSL™ Savings strategy increases overall, not only helping to hedge against inflation, but also earning money on an after-inflation basis! (And isn’t inflation protection what every wise investor is seeking right now?)

Finally, it is important to remember what the DSL™ Savings strategy is, and what it is not. It is a savings strategy. It is not an investing strategy. Thanks to decades of brainwashing from Wall Street and the mainstream financial media, most Americans do not understand the important difference between investing and saving. They are entirely different topics and should be treated as such.

The bottom line: Based on historical data, diversifying can protect your savings from the eroding power of inflation and can even help grow your savings on an after-inflation basis.

I will admit that I was completely shocked by the results. In fact, when I first saw them, I remember demanding that they be re-checked for accuracy. But sure enough, the returns were real. And while I expected my DSL™ Savings strategy system to outperform a typical savings account, I did not expect it to even outperform many investments during the same period! All it took was a little bit of diversification. We held the money in three separate areas: stable foreign currencies, precious metals, and U.S. Dollar denominated assets, which are all very liquid.

And that’s it. No secrets, no magic tricks, and no late-night infomercial gimmicks (although that last one would have been fun.) Just plain vanilla diversification. Isn’t it amazing how just a little bit of diversification can make such a big difference!

Before proceeding to the next step, be sure that you:

When you completed this step, you are now ready to advance to Level Four…. Congratulations!