In this 13th episode of the BRAND NEW Mid-Week Precious Metals Market Update, Tom Cloud discusses some of the technicals and fundamentals that are impacting gold and silver prices, with exclusive info for FTM Insiders.

You are currently viewing exclusive content normally available only to FTM Insiders. (If you want access to these precious metals reports each week in this format, become an Gold member today. Due to the importance of this message, we are making it available to our entire audience this week only. FTM Insiders, you can return to your Insider Dashboard here.

I may seem a little frustrated this week, I guess aggravated, as I continue to find it hard to believe that people cannot see what is happening. We’re seeing what they are calling a government shutdown that on Tuesday sent gold down $44. As I record this on Wednesday, gold has come back up $36 as big money and smart money is moving in, realizing this is a very short lived thing. Also, what the listeners need to realize is that this shutdown that we’re talking about now is about the fiscal year that ended on 9/30, and, by law, they have to create the money to balance the budget for 2013 before they can start 2014, which was yesterday, on Tuesday.

As I record this, we will talk first of all about the government. It is affecting the people that are on the sidelines, but all the non-essentials is what this is all about. The government is still running, and what you’ve got to really think about, or focus on, is the 17th of October when the debt ceiling comes.

First of all, let me say, going back to the argument about Obamacare, we just continue to be amazed that people think the Republicans really want to get rid of the power and do away with Obamacare. If you don’t believe me, if you think that Republicans really do want to get rid of Obamacare, then wait until you see when they come out and say, “We’ve got to compromise. And, we’re very happy. You know, some of the provisions we wanted are there. There are some good provisions in the health care bill.” And, I’ll bet anybody a dinner that’s what is going to happen.

If the Republicans were really against the health care bill, they would not budge. They would let the government shut down for the good of this country and the future of this country, and not give in. But, I’ll assure you, they’re going to give in on issue one, which is the 930 fiscal year that just ended two days ago.

But, get ready for the debt ceiling argument, because we also know debt’s going to be raised $2 trillion just like it was in August 2011. We saw gold go up over a $100 in two days. And, certainly, when you know they are going to print $2 trillion, it’s not going to last over 2 1/2 years at the outset, you’re seeing 20 something percent money created out of thin air at a time gold mining has produced about 2200 tons a year, which, if you related that to money supplies, about 1 1/2%. So, gold’s creation is going up 1 1/2%, while the paper money creation in the US is going up between 20% and 30% per year. It doesn’t take a genius to figure out, eventually, where gold is going to go. Certainly, there’s been a lot of manipulation on the short term.

As I’ve talked about on this show for several years, the sacred cow is the bond market because if the bond market collapses, then the US really does become a third world country after a period of time because you can’t sell your debt. Then you have to print it yourself, and then you hyper-inflate. Certainly, that is a real possibility. So, the bond market is very important.

China May Cause US Gold Shortages

Going back to mining for just a second, of the 2200 tons of gold that are produced or expected to be produced this year, China has already counted for 1300 tons of it. That’s one country. If you go to India and Russia that we don’t have figures on, probably 1600 to 1800 tons of the 2200 tons being produced are going to three countries. Yet, we’re seeing the rest of it spread out around the world, including the US.

We’re getting into serious shortages in warehouses that are bonded for Comex delivery, which we’ve talked about and sent out articles on. So, just watch this very closely because, pretty soon, miners are not going to really hurry. They’re going to just keep slowing down, knowing they have a valuable commodity in the ground. They’ll probably wait until it gets to around $1875 or $1900. Then you’ll see them pick up on the supply a bit. But, then, you’re talking about 2% a year that they’re increasing the gold supply, where fiat currency is still going to be increasing a lot more than that.

And, really, I want to end this quick update with a short story that happened to me over the weekend. I was out of town doing business with clients and going to a college football game. I had a gentleman come up to me who I’ve known for about 15 years who’s never done any business with me, whose relative is high up at JP Morgan. He said, “Can you get physical gold?” I said, “Yes. I can.” He said, “Well,…” We started talking about 15 minutes and he said, “My relative was advised to sell ETFs and buy physical gold, and asked if I knew anyone to get it from? I said I did.”

So, long story short, the high ups in JP Morgan are even telling their clients to liquidate ETFs. Now, the first thought, you may be saying they want them to liquidate just to liquidate and get into something else, but the real story is what I’ve talked about on this show several times in the past, that we’re not too far away from the musical chairs stopping. And, when they stop, it’s going to be like the tsunami that hit Thailand. It’s not going to be something you’re going to be notified about in the newspaper or by phone or email telling you. When the tsunami hits, it’s going to hit, and anybody holding gold in an ETF is going to have to wait for years of litigation.

Just look at the Madoff situation and all the other banking scandals in 2008, and see how many people have gotten any money out of it yet. The ones that have, it’s been such a low percentage of what they have in there. So, we continue to urge our clients to get out of ETFs and get into the physical metal because when the music stops, there’s going to be a lot of people out there that think they own gold that own nothing but worthless paper.

This thing is getting very serious, the battle is getting serious around the world, economically. There are a lot of things that are going to happen during the rest of Obama’s tenure, and, for me and my family, we’re going to be heavier positioned in metals than we’ve ever been as a percentage of our portfolio. You may not believe it now, but like I said, when the tsunami hits, it’s going to be too late to make those changes. All this is going to keep accelerating, especially as the physical gold leaves these warehouses.

So, hopefully, this has been an update that I would be buying gold, silver, platinum, and palladium all before the 17th of October when the debt ceiling argument comes. Now, you may see the price dip like it did on August 10, 2011, the day before, but once they agreed, it went up.

Once again, it’s just like what I mentioned to you about what’s going on right now. What the news has popped up on the screen while I’m talking is the government is not going back to work today, on Wednesday either.

It looks like Obama won’t bend so who’s going to give in?

It’s going to be the Republicans letting Obamacare stay, but they’re going to tell you that they did it because there is a few good provisions and their people they work for want them to vote to get this thing back to work. But, I can tell you the truth, I don’t know anybody I’ve talked to that would not want Obamacare taken out. So, they’re not representing us, the people. They’re representing them, the politicians. 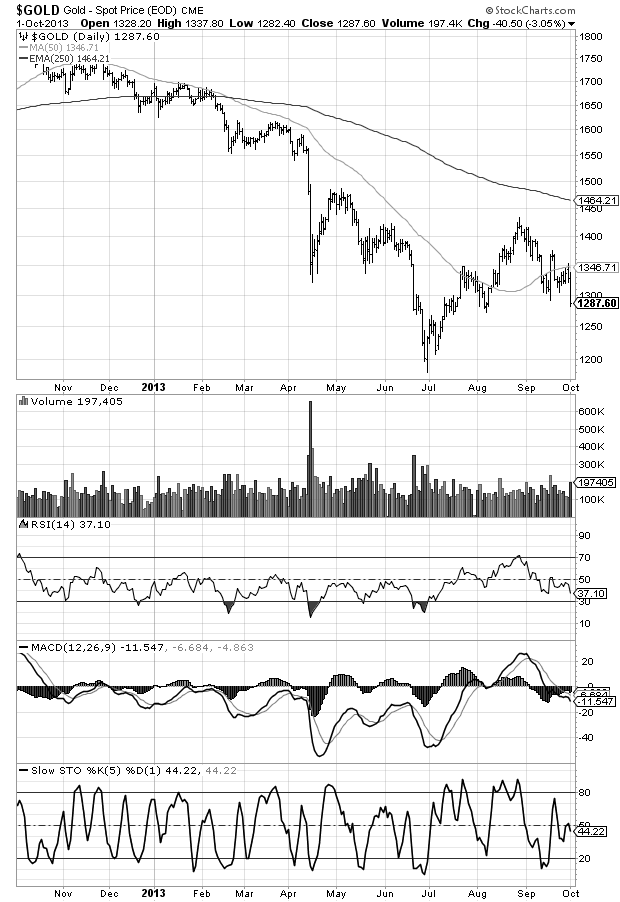 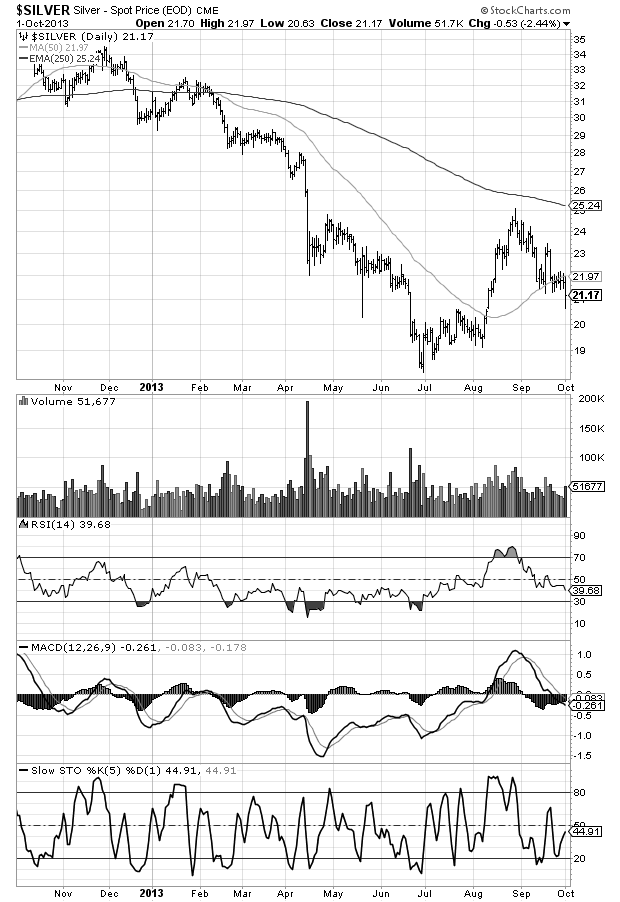 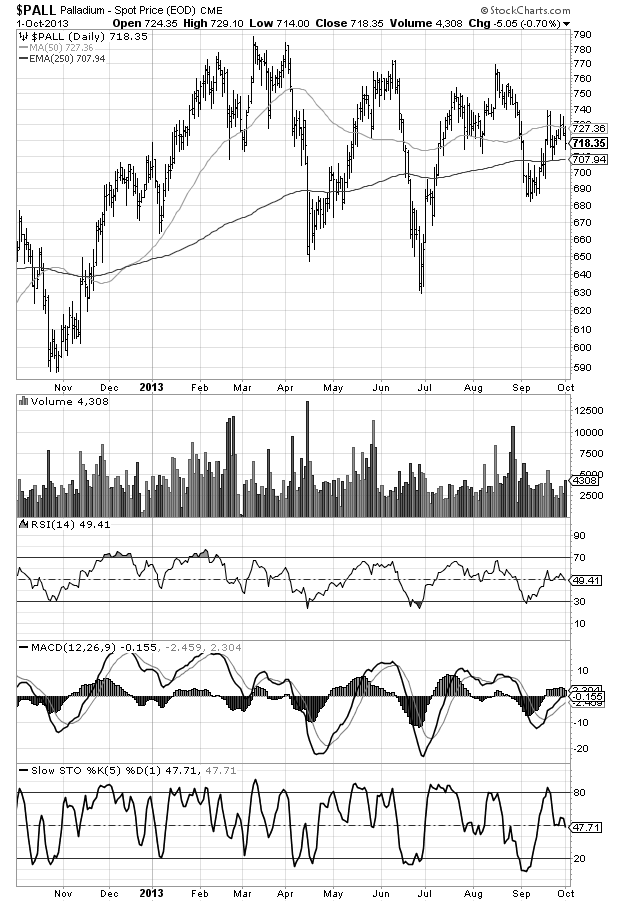 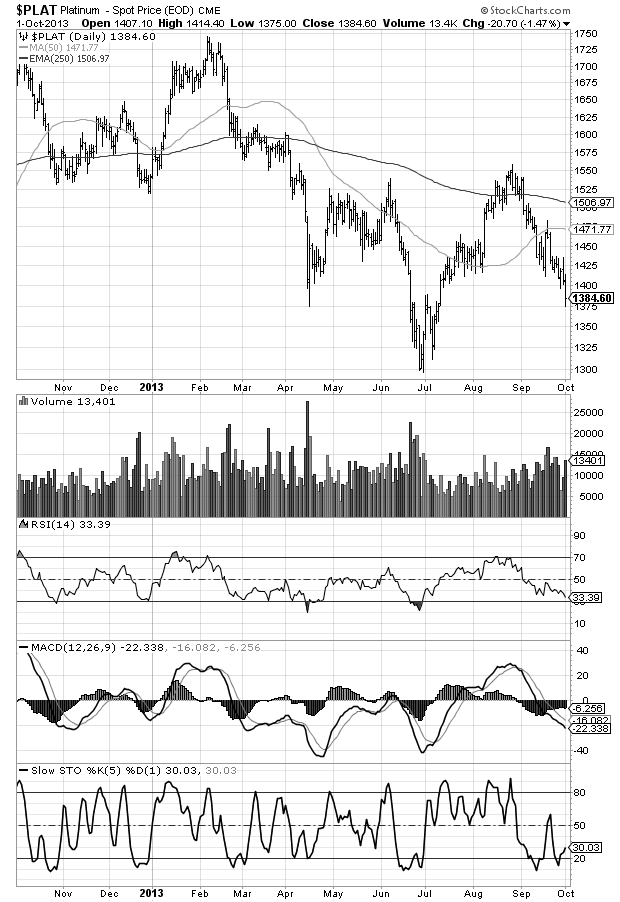