Institutional investors are taking their money outside the U.S. for 2014. Where are they headed? Europe.

U.S. equities have dominated the global investing scene for the past two years, as the S&P 500 has soared 40% since October 2011. However, according to a recent survey conducted by Citigroup, institutional investors are taking their money outside the U.S. for 2014. Where are they headed? Survey results showed that the most-favored investment class is European stocks, followed by Asia-Pacific and then the United States (As a side note, the Citigroup survey showed that the two least-favored classes for 2014 are commodities and bonds).

This trend of money flowing out of the U.S. has already begun. When you follow the money, you see that global ETFs attracted $48.8 billion in the third quarter of 2013, whereas U.S. funds brought in only $31.5 billion during the same timeframe.

As of the week of October 11, 2013, European stocks had experienced 15 straight weeks of money inflows, which is the longest such streak in 11 years. Out of the 14 European stock markets that we monitor weekly for our FTM Insiders, 10 have outperformed the U.S. benchmark S&P 500 index over the last 12 months. Considering the slow economic growth plaguing most Western countries, this is just another reminder that stock prices are rarely related to a country’s underlying economic performance. 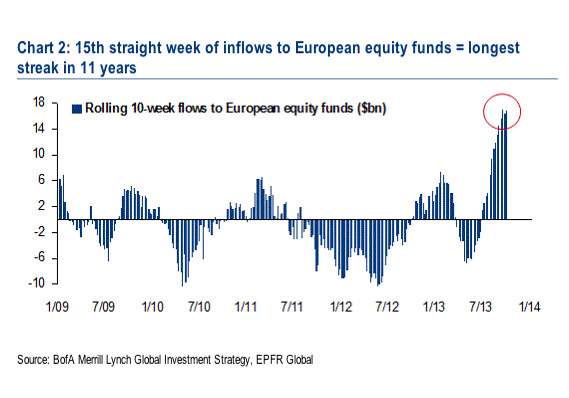 One of the European standouts has been Italian stocks, returning more than 23% over the past twelve months and over 10% this month alone.

Greek stocks have been rebounding from the depths of the country’s financial crisis and have gained 23% on the year. Even top hedge fund managers, like John Paulson, have reportedly been investing heavily into the nation’s financial sector. Ireland has emerged to outperform all other European markets over the last 12 months with over 50% returns (PIIGS anyone?).

But how can it be possible that European stocks are performing so well when only two years ago predictions of a euro collapse and Eurozone breakup were all over the financial media?

Flashback to Eurozone “Doom and Gloom”

If you read Time magazine in 2011, you would have come across this headline: “It’s Time to Admit the Euro Has Failed“, in which investment columnist Michael Sivy stated:

The collapse of the Euro, one way or another, is now inevitable, in my view.

Sivy continues by describing possible scenarios of a Eurozone collapse, the most likely in his opinion being:

The strong countries expel Greece and other weak countries from the Eurozone.

Perhaps you were following the doom-and-gloom predictions of American Economist Nouriel Roubini during this period. If so, you most likely read his forecast for the Eurozone in 2012, in which he stated that the Eurozone was destined to fail due to its massive debt crisis. And if that doesn’t ring a bell, maybe you followed the Wall Street Journal financial website, MarketWatch. One of its commentators stated in June 2011 that Greece would default on its debts within 12 months.

But you didn’t fall for all the “euro failure” hype, right? No way! You were reading Jerry Robinson’s commentaries right here on FTMDaily, in which he clearly stated that the euro would not collapse. In fact, he declared in March 2011 that the euro would survive and that it was here to stay. In that same article, Robinson states:

The mainstream press is hammering Europe; meanwhile, the U.S. Dollar benefits. But, I believe that the critics of the European Monetary Union are missing the bigger picture… Suffice it to say that the Euro currency is not some “new” invention. It has been years in the making… It is my sincere belief that the globalist agenda requires the existence of the Euro, as it is the prototype of the other regional currencies that will eventually be created.

Here at FTMDaily, we believe that the currency experiment going on in Europe is the template that will be used by other regional monetary union efforts. Is the euro flawed? Absolutely! Should it fail? Yes. But will the architects of this grand euro experiment permit the currency to disintegrate? We believe the answer is no.

We did not fall for the hype about the euro collapsing, and we will continue to cut through the mainstream media’s smoke-screen and provide you with the “real” stories relating to current economic events. As we always say, “When you’re ready for the truth, just follow the money.”

Topic: The writing is on the wall, the barbarians are at the gate, and the sun is setting on the American experiment.

Saudi spy chief says Riyadh to ‘shift away from US’ over Syria, Iran

As we predicted, the Saudis are publicly pulling back from the United States. Could be a publicity stunt, but if so, it is an unprecedented one. Investors should pay very close attention as this could be the beginning of the end for the U.S. dollar.

50 Charts Behind The Bull Case For Gold

The Big Takeaway From the September Jobs Report: The Economy Is Stalling

The U.S. economy added 148,000 jobs and unemployment fell to 7.2 percent in September. That’s not good news.

Explosive internal TSA documents prove that airport body scanners and pat downs are “not” designed to stop terrorists and admit that “there have been no attempted domestic hijackings of any kind in the 12 years since 9/11.”

The highest court says there’s not enough evidence to warrant taking a second look at marijuana’s Schedule I status.

Fake petition to “Support an Orwellian Police State in America” get lots of support by California citizens.

“Do you see a man skilled in his work? He will stand before kings; he will not stand before obscure men.”
Proverbs 22:29