The Cheapest Stocks in the World

Despite the recent recovery in European stocks, I do not believe that it is too late for the average investor to buy into Europe’s stock rally.

Over the last several years, I have been among a very small group of investors and analysts who have believed Europe’s financial woes were being overblown by the financial media. (Other similar voices included Jim Rickards and Warren Buffett.)

Back in March 2011, I wrote a piece entitled “Will the Euro Collapse or Survive” where I laid out my reasoning on why the Eurozone would eventually recover and why the Euro was not going away anytime soon. (In fact, I have long viewed Europe’s debt woes as a convenient distraction from the real debt ticking time bomb: the United States. After all, if investors are scared to invest in Europe, the U.S. stock markets and debt markets benefit.)

Since 2011, my thesis has not changed and has proven to be correct. Meanwhile, those who have been predicting the disintegration of the Eurozone and the demise of the Euro have been forced to watch as Europe’s economy recently exited a deep recession and as most European stock markets have risen dramatically from their lows.

Despite the recent recovery in European stocks, I do not believe that it is too late for the average investor to buy into Europe’s stock rally. Of course, now that many global investors are beginning to pile into European stocks, it is more important to be selective as you invest.

One way to profit from the ongoing recovery is to simply buy the highly liquid Vanguard FTSE Europe ETF (Ticker: VGK). 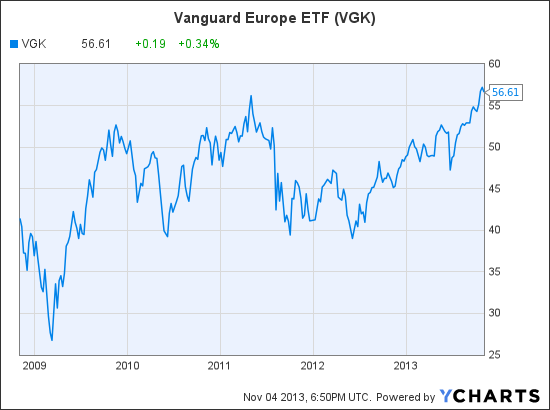 VGK is a low-cost way to broadly invest in around 500 major companies located in 17 different European countries. Over two-thirds of these companies are located in the United Kingdom, France, Switzerland, and Germany.

However, if your goal is to find the bargain basement deals still lingering in Europe’s financial markets, you will need to take on more risk by looking at countries like Greece.

As you can see in the chart above, Greek stocks are historically “cheap” when based strictly upon price. In fact, the Greek stock index has not been at these levels since 1997! Of course, there is still a lot of economic turmoil going on in Greece. And their debt loads and unemployment levels are at staggering highs.

But if you are looking for value and have a long time horizon (5-10 years), selectively buying Greek stocks could provide some jaw-dropping returns. (I say “selectively” because some Greek stocks have climbed too quickly in recent months for my comfort level.) After all, I expect Greece to still be around 10 years from now. And its stock market will have likely rebounded to much higher levels by then. And it seems that I am not alone in thinking this as billionaire hedge fund manager John Paulson recently dumped $15 billion into Greek stocks, which he considers the “cheapest in the world.”

One way to invest broadly into Greek stocks is by purchasing shares of the Global X FTSE Greece 20 ETF (Ticker: GREK) More bold investors may consider investing directly into one of the handful of Greek companies that trade on U.S. stock exchanges.

But Greece is not the only stock market that is relatively cheap right now. In fact, I have identified at least six more countries, whose stock markets are “unreasonably” cheap right now and should move higher in the coming years. (Hint: They are not all in Europe…) If you have a long-term investment horizon, say 5-10 years or more, these markets are definitely worth a closer look.

If you are an FTM Insider, keep reading below to see my list of these other six historically “cheap” stock markets. If you are not an FTM Insider, learn how you can get access for only $19.95 right now by clicking here.

Global GDP numbers tell a clear story: The U.S. is the world’s No. 1 economy. But a lot of Americans don’t see it that way.

On Monday morning, the company said it had raised the price range for its I.P.O. from $23 to $25, signaling the company’s bullish outlook ahead of its trading debut on Thursday.

Earnings season can really be a rough time for the market, but over the past year and a half, it hasn’t made investors very scared at all.

Next time you absent-mindedly watch the ads as you’re waiting to pay for a tank of gas, they might be watching you back.

TSA union calls for armed guards at every checkpoint

The union representing airport screeners for the Transportation Security Administration says Friday’s fatal shooting of an agent at Los Angeles International Airport highlights the need for armed security officers at every airport checkpoint.