Worried About Socialism in America? It’s Too Late

During the ides of March 2019, the Trump administration released its proposed budget for the fiscal year 2020. Under this new spending plan, the Trump White House forecasts that it will spend $4.7 trillion — that’s $4,700,000,000,000.00 — while only taking in $3.6 trillion during that same 12-month time period. Once again, Washington plans to saddle the American economy — and taxpayer — with yet another $1 trillion+ annual deficit.

But that’s not all.

According to the White House’s 2020 budget, the Trump administration is forecasting that these trillion-dollar annual deficits will continue in 2021 and again in 2022. And that’s on top of the $1+ trillion deficit that America has added in 2019!

All of this fiscal insanity would be comical if it weren’t real money — and if our children and grandchildren weren’t the ones who will be stuck with the bill. Sadly, Washington’s spending excess is indicative, not of a nation on the ascent, but rather, of a decadent empire in decline.

America’s national debt now stands at a gargantuan $22.8 trillion. And it is rising by tens of billions of dollars every single day. Add to that the projected $100+ trillion in unfunded liabilities for Social Security, Medicare, and Medicaid and it is obvious that America has dug itself a hole that it can never get out of.

In fact, the latest economic forecasts released by the Federal Reserve reveal that America’s supposedly robust economy is actually slowing at an accelerating pace. Last year, the Federal Reserve announced plans to raise interest rate targets at least two times in 2019, due to America’s “solid economic growth.” This year, however, the Fed has clearly changed its mind, announcing that America’s economy is simply too fragile to raise interest rates even once this year!

In addition to making a sudden U-turn on its planned interest rate policy, the Fed also lowered its U.S. economic growth forecasts for the second time in recent months and has slashed rates twice this year already.

This large discrepancy between the Trump administration’s wishful thinking about future growth and the Fed’s more depressing figure will likely lead to even more explosive debt loads in the near-term to compensate for the difference.

Perhaps the only thing worse than America’s astronomical debts and deficits is the general denial of their existence both by Washington and the American people. A recent poll released by the mainstream media revealed that 71% of Americans believe the economy is “good” while only 27% of them believe the economy is in “poor shape.”

This is typical of our country’s boom-bust economic cycle where Americans largely live in denial about economic reality as long as the illusion of prosperity is propped up by the central authorities. However, when something goes wrong (e.g., their 401(k), IRA, or housing value dips) then suddenly they wake up.

Rewind to the year 2009 for a moment. At that time, the U.S. national debt was a “mere” $9 trillion, and I was being invited to speak at many “Tea Party” events, organized by an outraged base within the GOP, which were determined to send a message to Washington that its fiscal recklessness was unacceptable. At that time, the people had woken up to the reality of our broken government that has long been hijacked by corporate interests. They appeared to understand the true theft that was occurring as Main Street was fleeced in order to bailout Wall Street.

10 years later, political movements like the Tea Party have faded into oblivion. After all, America’s economy, we are told, has never been better. President Trump has dubbed it “the greatest economy ever.”

In many ways this is the greatest economy in the HISTORY of America and the best time EVER to look for a job!

Of course, such talking points are rooted in clever political machinations and delusions.

Ironically, as the national debt and deficits have more than doubled in recent years, there is little to no outrage in 2019, especially among the GOP.

This, of course, should finally expose the ridiculous illusion that there is any meaningful difference between the Republican and Democratic political parties. America’s two-party system is practically owned by corporate and other special interests, who do not in any way represent the “will of the people” but rather the “will of the elites.”

Alas, some will protest, adamantly suggesting that there is indeed a substantial difference between America’s two political parties. Case in point, we are told, is the differing view on abortion held by the two parties.

But this distinction as well is outright laughable as Republicans held complete control over Washington (House, Senate, White House, and even a GOP-leaning Supreme Court) from January 2017 to January 2019. During that time, corporations got mega tax-cuts and America’s largest socialist program, the U.S. military, got a massive boost in taxpayer dough, but the babies in the womb were paid little attention. If the Republicans really wanted to end the practice of abortion, they had plenty of time, and more than enough power, to put a stop to it. Instead, they chose to pander to their naive base by using abortion as a political talking point for votes and, once in power, they ignored the issue as they always do. Ironically, the most vocal pro-life voters appeared to give the GOP a total pass for ignoring the topic of abortion and instead spent their time defending Trump’s sexual trysts.

And the deluded masses are already lining up to believe the next round of lies and political propaganda as we head into the 2020 election.

Aware that they can’t use their abortion gimmick on GOP voters once again in 2020, Washington’s ever-clever political engineers have found exactly the right bait to ensnare the GOP’s naive base once again. This time, instead of warning about endangered babies in the womb, gays “overtaking” the military, or American Muslims who seek to express their “God-given” Constitutional rights, the political propaganda will involve going after a much older foe: Socialism.

As if the irony were not already thick enough, the GOP plans to revive the “looming” threat of socialism as one of their top political issues in the 2020 election. The irony here, of course, stems from the fact that America, in many ways, has already adopted many socialist programs and institutions.

First, perhaps a simple definition of “socialism” is in order.

According to Merriam Webster’s dictionary, socialism is “a way of organizing a society in which major industries are owned and controlled by the government rather than by individual people and companies.”

Therefore, at the most basic level, economic socialism involves any program or institution that is 1) involuntarily financed by the general population and 2) not privately owned by any individual or private entity but instead, owned by the government and existing for the public good.

Let’s begin by seeing if this definition applies to America’s golden calf: The U.S. military. (As an interesting sidenote, historians agree that for the first three centuries of the Christian church, soldiers were asked to repent and lay down their swords before joining the early church. Today, ironically, members of the military are applauded and revered in American churches. But I digress.)

Indeed, there may not be anything on earth closer to a socialist utopia than the U.S. military. This entirely government-run institution commits ALL of the sins that “capitalists” warn against: Free single-payer health care for all, free college tuition for all, free housing for all, free daycare for all working parents, rock-solid government paid pensions for all, and much, much more, all to the tune of $700+ billion per year! And all courtesy of the U.S. taxpayer.

According to decorated four-star general Wesley Clark, the U.S. military is “the purest application of socialism there is.”

For those who are eager to overthrow socialism, they may first want to reconsider what that might mean for the U.S. military.

PODCAST: American Socialism 101 – Why Capitalism vs Socialism is a False Choice

Indeed, it is far too late to be worried about the spread of socialism.

– Social security is a “socialist” scheme. When Social Security was first introduced back in the 1930’s, Republicans put up a fierce fight against the old-age pension program, likening it to slavery and dictatorship. Rep. James W. Wadsworth (R-NY) warned that the passage of Social Security would provide the federal government with a power “so vast, so powerful as to threaten the integrity of our institutions and to pull the pillars of the temple down upon the heads of our descendants.” The answer to whether Social Security is a socialist program was clear to Republicans from the beginning as the answer is right in the program’s very name!

“Social Security” involves the involuntary extraction of money from taxpayers by the government. The government then “redistributes” this money (how socialist!) according to a standard determined by Washington for the “public good.” Yep, that fits the definition of socialism, as there is nothing voluntary or privately-owned about this system.

– Medicare is a “socialist” scheme. At least Ronald Reagan believed so when he fought tooth-and-nail against it back in 1961, stating: “One of the traditional methods of imposing statism or socialism on a people has been by way of medicine… If Medicare passes into law, the consequences will be dire beyond imagining… From Medicare it’s a short step to all the rest of socialism, to determining his pay and pretty soon your son won’t decide when he’s in school, where he will go, or what he will do for a living.”

Indeed, Medicare is literally the single-payer form of “healthcare for all” that “capitalist”-loving Americans all claim to fear and dread. Again, its funding is involuntarily extracted from the public and then redistributed according to the government’s wishes for the “public good.” That is socialism, pure and simple.

– Minimum wage/child labor laws are “socialist” schemes. Ironically, even devout “capitalists” think the free market should be constrained. When the government steps in and restricts corporations from requiring more than a 40-hour workweek or protects otherwise able-bodied, yet underaged, children from engaging in the American workforce, you are dealing with the tentacles of socialism’s influence. 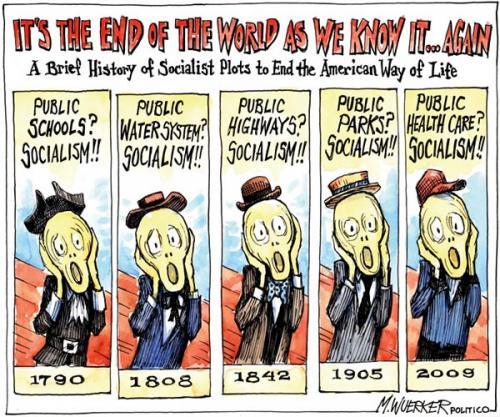 And we could go on…

So too is America’s government-funded education system (from pre-K to higher education).

And, of course, taxpayer-funded bailouts for big corporations are “socialist,” or at least the furthest solution from capitalism.

So as you head to the polls in 2020 with ruffled feathers over how America is sliding into “socialism”, just remember, we are already there. In the end, the “capitalism vs socialism” debate that will rage in primetime in the lead-up to the 2020 elections is an entirely false choice. Like most other countries in the world, America is not a fully “capitalist” country nor a fully “socialist” country. Instead, America has a mixed economy.

However, those who remain doggedly determined to rid the country of socialism can perhaps set the example for future generations by giving up their “socialist” Social Security check and refusing their “socialist” Medicare insurance. Perhaps then we will finally see who’s really against socialism and who is for it.

Go ahead, take the lead by setting an example. Who knows, maybe someone can start a movement to end the growing threat posed by ”socialism” simply by putting their money where their mouth is.

Mastermind Call: An Introduction To Making Money With Airbnb

PODCAST: Why Precious Metals Are On The Move In 2020

PODCAST: The Uptrend Continues In 2020