What’s Worse… A Slowdown in China, or More of the Same?

If China’s consumption rate of commodities continues growing at the same rate that it has for the last 10 years, this is what 2020 will look like… 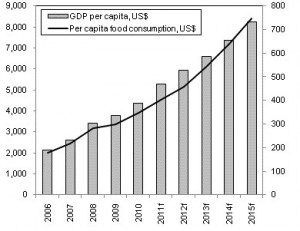 HOUSTON, APRIL 19 – It is no secret that China has been devouring much of the world’s supply of commodities. There is some speculation that China’s economy will slow down dramatically in the coming years. While I agree that China’s growth could moderate, I do not expect the country’s demand to fall off of a cliff, as some surmise. If I am wrong, then the world economy will certainly be faced with a massive slowdown. If I am right, however, the globe is not much better off.

Consider this: If China’s consumption rate of commodities continues growing at the same rate that it has for the last 10 years, this is what 2020 will look like…

Another Saudi Arabia: The globe would need to pump an extra 300+ million barrels of crude oil per year, nearly as much as Saudi Arabia now pumps every year.

More Than Three New States Like Iowa: Chinese demand for soybeans in 2020 would require a 15% increase in global output, which is the equivalent of three new farming states with output similar to the state of Iowa.

300% Increase in Chile’s Copper Production: China’s voracious demand for copper would require the world’s leading producer, Chile, to increase its output by 300%.

And that does not include the increasing amounts of cotton, meat, and a plethora of other commodities that the growing nation of 1.3 billion people will demand if their consumption trends continue unbroken. And don’t forget India, Brazil, Indonesia, Russia, and many of the other emerging nations that are witnessing an increasing demand for commodities as well. For the best way to play the coming explosion in commodity prices, refer to our new P.A.C.E. investment portfolio as it contains our current favorite hard asset investments that we expect to outperform the overall market.