Prepare for Chaos in the Cities

Prepare for Chaos in the Cities

Plus, a special guest interview with David Morris

On Wednesday last week, Federal Reserve Chairman Ben Bernanke announced that there would be no tapering of the Fed’s current $85 billion per month in bond and mortgage security purchases. This was no surprise to FTMDaily, as Jerry has said over and over on this program that he believes the Fed has no choice but to continue its money printing campaign. After all, the United States federal government is over $16 trillion in debt, running a budget deficit every single year with no end in sight. Since the Federal Reserve is the Treasury bond-buyer of last resort, and since the federal government can’t seem to curb its addiction to more and more spending, the Fed has no choice. In fact, Jerry forecasts on this week’s program that the quantitative easing (QE) will increase in the near-to-mid term.

A report last week claimed only one in four Americans even know what QE is, much less what it means for America’s financial future. Meanwhile, every armchair economist in the country was up in arms about the $174,000 payment to a deceased Senator’s widow within a recent house bill. This story and many others pumped out by the corporate-controlled media on a weekly basis are simply smoke screens, covering up the ugly truth about the out-of-control spending in Washington.

Become an Gold member today and receive access to Jerry’s Income University, a 24-week introduction to creating multiple streams of income complete with 22 income streams you can create both now and in retirement. Learn more about this vital information and how you can break free financially. Click the image below for details.

Tom Cloud joins us for his weekly Precious Metals Update. This week Tom discusses the impact of the Fed decision not to taper any of its $85 billion per month of bond and mortgage securities. The other fundamental issue in metals is the upcoming debt ceiling decision by the Congress. Listen to Tom Cloud’s insights on gold, silver, platinum, and palladium.

An Interview with David Morris 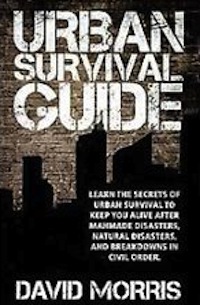 Just last week, news reports of anxious iPhone consumers fighting in a line outside of an Apple store reminded us to stay prepared for chaos at all times. If human beings will fight each other in a line to purchase a piece of plastic and metal, then imagine what they would do if they feared for their lives? What if they were starving and could not procure any food for their families? This should be a reminder to us all that natural disasters, economic chaos, rioting, and war are not to be taken lightly. These situations could happen to anyone, anywhere.

In Segment Two, David Morris is here to help us all get better prepared for the coming economic meltdown or the next natural disaster. Morris is a survivalist expert who has helped tens of thousands prepare for the worst with his 12-week course, Survive In Place, and his popular book, Urban Survival Guide. 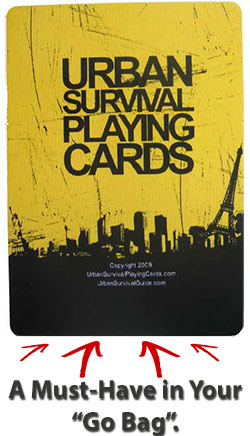 The best way to prepare is, of course, to get out of the big cities and onto a piece of land. But for some people, leaving the city is not feasible due to a job, family, or other obligations. David Morris has developed a solution for those who are unable to leave the city. He has practical tips and advice for anyone who wants to prepare for disaster situations.

Jerry and Jennifer have gleaned much information from Morris for their own preparedness, and they actually keep a set of Morris’ Urban Survival Playing Cards in their Go Bag at all times. These cards have vital life-saving information for surviving the worst situations. Learn more about how and why to create a Go Bag here, including a brief how-to video on getting started.

Other Products By David Morris