As if the Middle East is not already awash in U.S., Chinese, and Russian armaments, the military-industrial complex has sought Congressional permission to send another $2 billion in arms to war-torn Iraq.

FTMDaily.com – After years of American attempts to spread “peace and democracy” to Iraq through the barrel of a gun, it appears that the bloodshed in this war-wracked nation continues to increase. According to a recent report issued by the United Nations, over 1,000 Iraqis were killed in violence in the month of May alone. Not only is this the highest monthly death toll in years for the people of Iraq, but it also suggests that things within this oil-rich country are getting worse, not better.

Iraq is a broken country suffering from daily occurrences of car bombs, gun fights, and increasing oppression from the government’s growing dictatorship. Iraq’s current Prime Minister, Nouri al-Maliki, heads the nation’s Shi’ite majority and has deep ties to the Iranian government. Maliki is yet another tyrant that has suppressed the media, murdered his opponents, and isolated the nation’s Sunni and Kurdish peoples. In addition to a mounting death toll, much of Iraq’s national infrastructure is in disarray.

The nation of Iran has longed desired to spread its Islamic idealism over the people of Iraq and the current instability appears to have played into Iran’s hands perfectly. Iran has become a primary exporter of electricity and natural gas to Iraq. In exchange, Maliki has opened his country to Iranian operatives who are using Iraqi airspace to deliver aid and comfort to Assad amidst the Syrian civil war.

And there are new worries that Iraq may be preparing to descend into a state of civil war. Just last month, reports of an Al Qaeda-led jailbreak from Abu Ghraib sent over 500 imprisoned jihadis on the loose in the country.

As the U.S. continues to finance and support anti-Assad forces in Syria, the U.S. has simultaneously condemned Maliki’s growing ties to Iran and its willingness to provide Iran with its airspace.

Not surprisingly, America’s military-industrial complex, which is headquartered in the Pentagon, has come up with a grand solution: To send another $2 billion in weapons to Iraq.

According to a new report from Wired:

Amid the most deadly month in Iraq in five years, the Pentagon notified Congress last week that it is nearing three deals with the government of Iraq worth nearly $2 billion that would provide military equipment, maintenance, training and general support.

With a $900 million price tag, the largest of the three Defense Security Cooperation Agency (DSCA) requests submitted to Congress would provide a package of 50 Stryker vehicles produced by General Dynamics, as well as additional equipment, parts, training and logistical support to provide the Iraqi Army with “reliable capabilities” for detecting “early warning of contamination by radiological, biological, and chemical material.”

So, once again, the military-industrial complex has strong-armed its way into sending more weapons into the most volatile region on earth. Will the U.S. ever learn from history?

America has been burned in situations like this before.

Throughout the 1980’s, the U.S. covertly funded and supplied massive armaments to the Afghan mujahideen through Operation Cyclone. Through this U.S. taxpayer financed operation, the CIA stirred up the hornet’s nest within Pakistan and Afghanistan by seeking out the most radical “rebels” and arming them to the teeth with one hand and giving out Korans with the other to buy their trust.

These CIA-trained mercenaries, many of which would later form the Taliban, succeeded in stopping the Soviet invasion of the 1980’s. Also, one of these CIA-funded and trained “freedom fighters” was a man named Osama Bin Laden. He, along with a whole consort of radical Islamists would eventually turn the weapons given to them by the U.S. against America.

Or what about Saddam Hussein? 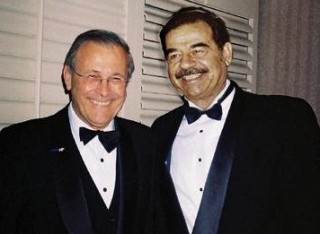 Saddam Hussein was another of America’s useful tools. During the Iran-Iraq war of the 1980’s, the U.S. pumped money and weapons into Saddam’s coffers. Later, when tensions ran high between the U.S. and Iraq, Saddam unleashed the remnants of his U.S.-financed arsenal against America during the 1991 Gulf War.

Today, the military-industrial complex is arming Al Qaeda operatives and sympathizers in Syria. We also armed them in Libya prior to the fall of Gadhafi. Then, we used the Benghazi embassy as a weapons depot to transport Libyan weapons to the Syrian rebels.

And, of course, there is Egypt. The Egyptian military overthrew President Morsi in an obvious coup, but good luck getting the Washington elites to consent to that interpretation. Why the resistance to calling the recent overthrow of Morsi a coup? Because according to our own laws, America cannot provide foreign aid to a nation who overthrows its own elected leaders by a military coup. But laws are just technicalities to be overcome in the Washington beltway. On July 31, Sen. Rand Paul (R-KY) proposed an amendment that would temporarily halt our annual $1.3 billion in foreign aid to Egypt’s military. The Senate overwhelmingly defeated the amendment with a 86-13 vote.

Nothing can stand in the way of U.S. defense contractors selling weapons abroad… even when it is against our own laws

The U.S. is by far the world’s largest arms exporter. The logic of arming the world, including our own enemies, is rarely questioned in a public setting. And when the idea is challenged publicly, the response is typically the same: “If the U.S. doesn’t arm them, someone else will.”

But this logic is completely absurd for at least two reasons.

First, most countries couldn’t afford to purchase billions in weapons without loans from Western banksters or from the foreign aid financed by U.S. taxpayers. Countries like Egypt don’t have the money to buy $1.3 billion in weapons. The U.S. extends credit to the Egyptian military and then requires them to buy our weapons with the money. (Forget the idea that the U.S. writes these countries a blank check out of the kindness of our hearts. Foreign aid is a scam that props up the military-industrial complex.) The foreign aid never leaves our country. Instead, it goes from 1) the U.S. taxpayer to 2) the U.S. Federal government and then to 3) the Western defense contractors who then deliver weapons to these countries.

Shouldn’t U.S. taxpayers have a say in these matters? Especially, when you consider that our own nation is falling apart.

Other nations, who buy our weapons without foreign aid, usually must borrow the money from Western banksters, which places these nations into a perpetual debt cycle.

Secondly, America has the most advanced weaponry in the world. So, why sell our own advanced weaponry to a region in which we will likely be entangled for decades. I am certain that American troops would prefer to wage war against Chinese or Russian made weaponry than against our own high tech-weapons. It just doesn’t make sense.

America’s foreign policy is dictated by the defense contractors whose bottom line is impacted only through increased global arms sales. And it is perpetuated by a corrupt corporate-controlled media that sells war to an ignorant public.

This is a scam perpetrated by the Pentagon and its vast network of defense contractors. These defense contractors are often public companies. They have shareholders to keep happy. How? By increasing revenues and profits. (Translation: Selling lots of armaments, high-tech defense weaponry, along with ongoing “training and support.”)

Billions of dollars are being spent to weaponize the Middle East as civilian deaths, including women and children, climb into the thousands each month across the region.

Arming Afghanistan was a mistake.

Arming Iraq was a mistake.

Arming the Libyan “rebels” was a mistake.

Arming the Syrian “rebels” is a mistake.

Arming Egypt is both illegal, and a mistake.

And selling more weapons to Iraq is a mistake.

Segment 1: Beware of the Pitfalls SEGMENT BEGINS AT 00:39 Over the years, investor/trading coach Jerry Robinson has encountered several pitfalls that have interfered with achieving financial success. Today he shares five of these pitfalls that may not be readily...

END_OF_DOCUMENT_TOKEN_TO_BE_REPLACED

(Recorded on 10/06/21) Topics covered on this special webinar Although hard asset specialist Tom Cloud has been in the diamond business since 1975, there has never actually been a practical and liquid diamond market. Host and author Jerry Robinson joins Tom as they...