In this seventh episode of the BRAND NEW Mid-Week Precious Metals Market Update, Tom Cloud discusses some of the technicals and fundamentals that are impacting gold and silver prices, with exclusive info for FTM Insiders.

This is Tom Cloud with the mid-week precious metals market update. All eyes, today, are looking at several things. The first being the FOMC notes that will be released this afternoon (Wednesday, August 21). Everybody’s waiting to see if tapering is going to be mentioned in those notes. Now, it’s my opinion and the opinion of many that the tapering has been factored into the gold and silver market already. I really don’t expect the sell off to be very much even if tapering is to start in September. There’s a hint of that in the minutes that we’ll receive this afternoon.

It’s been interesting all Wednesday morning. The market went down as much as $13 and as we record this, it’s only down about $3, so this could be an interesting afternoon.

The other news that’s just broken here on Wednesday morning is that Syria has used chemical weapons today and killed hundreds of their protesting citizens. This is one reason I think gold has recovered pretty strong in the last couple of hours.

We are also keeping a close watch on Egypt as the militia fighting there has slowed down, but if it picks back up, that certainly will be very positive for gold.

I think probably the biggest piece of news that has broken that assures us of higher gold prices for the remainder of the year is the Federal Reserve yesterday hit $2 trillion, which is the amount of US government debt it owns. US Treasury bonds, when Obama went in, the Fed owned 90% less than that. All this has come about by people not wanting to buy US Treasuries and the Feds had to buy them. So this definitely has helped push interest rates up, and the treasury market, that 9% drop we saw a few weeks ago, drove gold up $100 in just a few days. This seems to be festering again, and could happen again very quickly. So we’re watching this week and next week when Europeans return from vacation.

We also have the situation in India where the crops are coming in, and we see the Indians buying gold, even though the government has put a tax on it trying to get them not to. This has also been good for silver investors because India has always been, historically, a gold buyer, but now citizens are willing to step up and buy silver for the first time in large quantities.

So we’re heading into an explosive fall season. We expect both gold and silver to go up substantially like they have the past three weeks. Yes, I’ve said several times, I think there’s a good chance that even though silver dropped 35% from the opening day this year until about five weeks ago, I still think there’s a chance that gold and silver will have a profitable year.

Gold is still down 18% for the year, and silver is still down 23 or 24% for the year, even after the recent run up in prices. So, we feel very confident that we will continue to see mining companies making minor profits and demand picking up for gold and silver both in the central bank arena as well as the investor arena, as we have seen several sell signals given on the stock market and the bond market is just hanging on. That money has to go somewhere, and we believe some of it will redirect to precious metals.

The last thing I want to mention before I get a little more specific is the dollar. It has absolutely been shellacked: a 6% drop in the dollar in two and a half weeks. It’s all the way down below 81 now, when it was nearly at 85 just three weeks ago (see chart below. So, even though every other country has problems, they’re looking at the dollar as one that is very explosive to the downside, that’s being propped up strictly from petrodollar. (The existence of people having to buy dollars to settle their oil trades in dollars.) 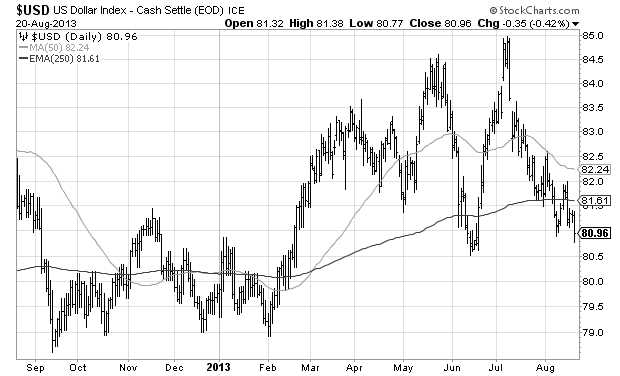 Other news this week shows that China will surpass the United States in 2017 as the largest oil importer, and that certainly will affect the prices, too. That’s real good for gold long term, also.

Now, to get specific, right now I think you are seeing the moving averages rise. If the 100 day moving average on gold does go the other way, we don’t think it will drop far. Once it goes across and stays above that $1369, we think $1400 could easily be taken out next week even with the drop today if there is any hint of tapering in the market.

So, as far as I’m concerned, you should be buying gold. There’s no reason to hold back and wait unless you want to wait through today on Wednesday just to see the tapering news. If it’s not mentioned and there’s even any hint that the quantitative easing is going to continue, you could see gold at over $1400 as early as this afternoon.

So, gold you should be moving into, and silver, we’ve got specials. Again, we’re very fortunate that we know a major wholesaler that is willing to share some of his good fortune on silver with you, the investor, by letting us sell them at 35 cents below market throughout this week, and we do have silver eagles, silver maple leaves, silver philharmonics, and silver rounds all available at the special price all week.

Also, lastly, palladium is very dependent on good economic news, and car buying right now is looking kind of neutral after the big run up it’s had the last few weeks. It’s kind of complacent right around $750. So, we’re waiting on the next move to see if it’s up or down. So, right now, very neutral on Palladium, but still see it as a great buy for the up side.

With this week’s mid-week precious metals market update, this is Tom Cloud signing out. 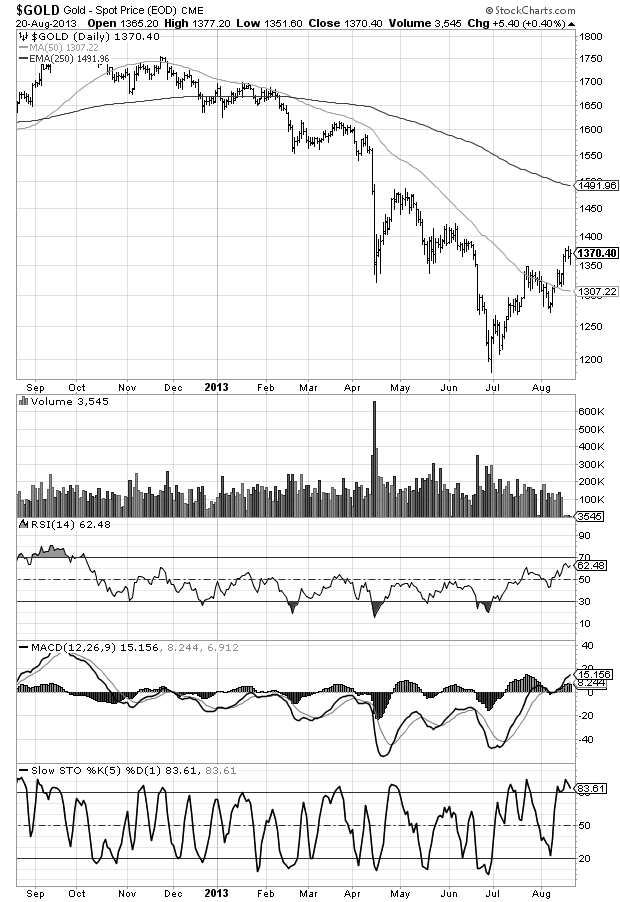 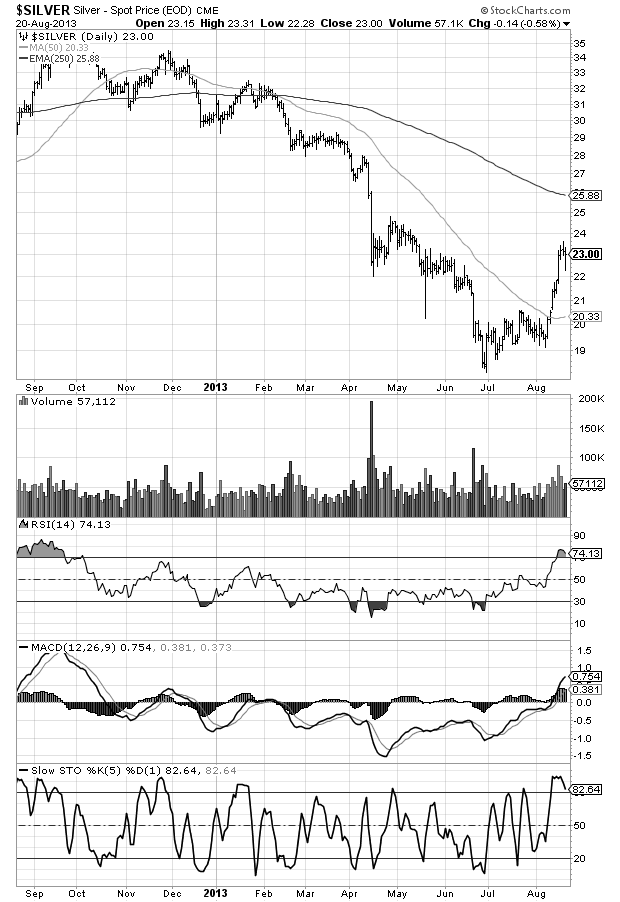 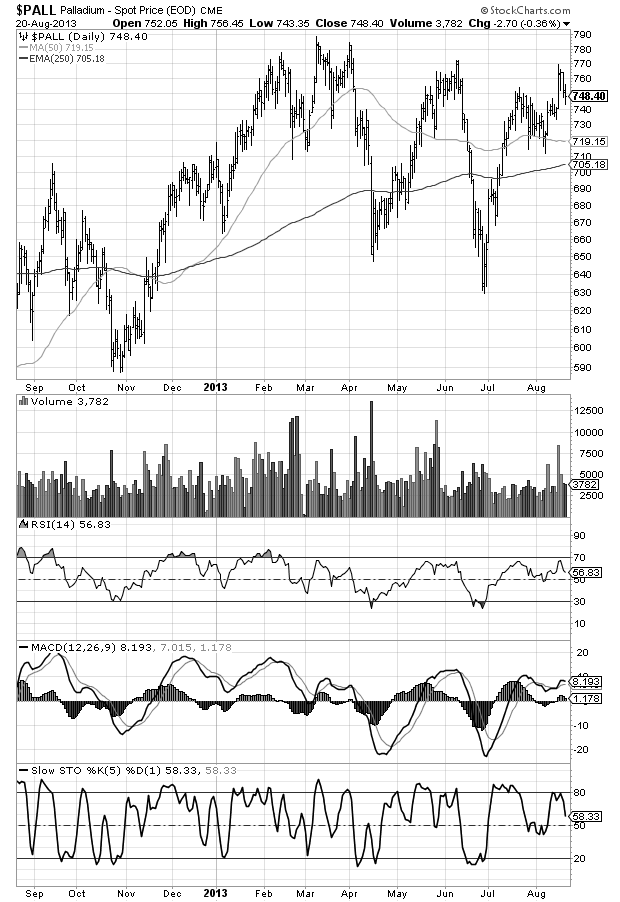 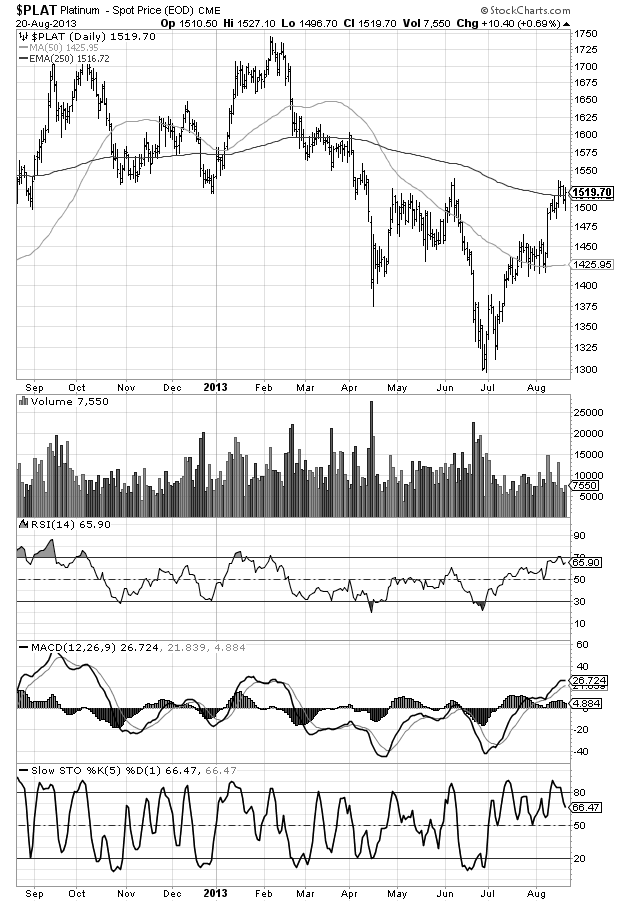