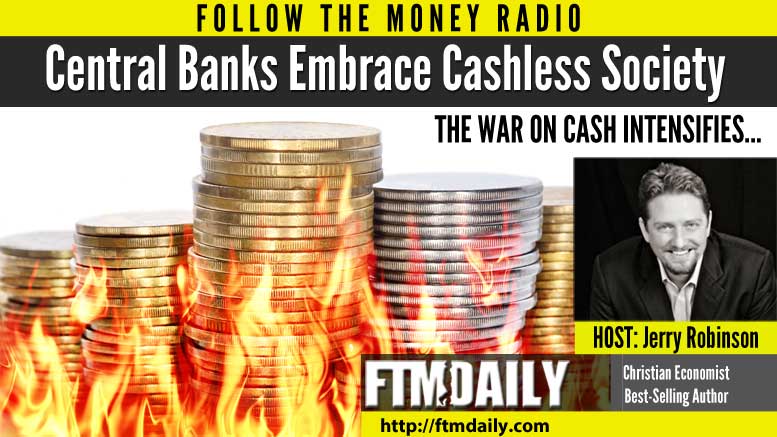 PODCAST: Central Banks Embrace Cashless Society
Welcome to this week’s edition of Follow the Money Weekly Radio!
On this week’s broadcast, Jerry Robinson shares the latest developments by central banks to eliminate paper money in favor of going “cashless.” But first, a shocking story about Iran and the tragic events of 9/11. Later, an interview with Tom Cloud on the precious metals markets.

Christian economist Jerry Robinson opens today's show by discussing a recent (and outrageous) U.S. court ruling ordering the nation of Iran to pay reparations to victims of the 9/11 attacks.

A ridiculous new U.S. court ruling has ordered Iran to pay $7.5 billion to victims of the September 11, 2001 attacks. Further, Iran has been ordered to pay $3 billion to insurers who had to pay out due to the terror attacks. The ruling, which rests on no evidence, states that Iran was guilty for failing “to prove that it did not help the [9/11] bombers.“

Ironically, the judge who made this ruling against Iran is the same judge who had ruled last year that Saudi Arabia has “sovereign immunity” for 9/11 and so can’t be sued for it. Apparently, those immunity rules only apply to terrorist states that we like (Saudi Arabia) and not to the ones we don’t (Iran).

You can read the full story here.

A Bitcoin-Style Currency for Central Banks

The Bank of England just declared war on Bitcoin and won't even need to fire a single shot. Here's the breakdown...

Meet the new blockchain currency that is 100% controlled by central banks.

It’s known as RS Coin and it is a Bitcoin-like system that can be controlled by central banks.

The creation of RS Coin was initiated (and presumably funded by) the Bank of England, which has long sought a digital currency solution. Together with the University College London, the central bank has designed this new Bitcoin rival currency with a special encryption key that essentially provides monetary policymakers with a “backdoor” to adjust the levels of money supply to their heart’s content.

While central banks (and financial regulators) are waking up en masse to the benefits of the blockchain technology that undergirds Bitcoin, they despise the anonymity Bitcoin provides to its mostly Libertarian users.

But aside from the obvious, Bitcoin is unattractive to central banks due to the fact that the Bitcoin network can only handle seven transactions per second.

RS Coin promises to be a more scalable cryptocurrency. It can process over 2,000 transactions per second. Most transactions take less than one second to clear (much faster than Bitcoin’s 10 minutes).

In this segment, Jerry Robinson explains what you should know about RS Coin.

It’s Official: Bitcoin Was The Top Performing Currency Of 2015

PODCAST: The Future Of Bitcoin

A Beginner’s Guide To Bitcoin