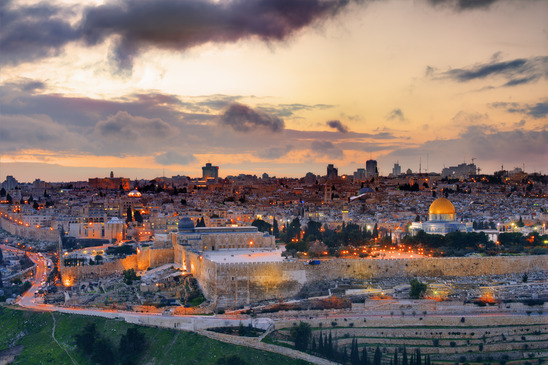 FTMDaily.com – This weekend, Pope Francis embarks upon his highly anticipated whirlwind visit to the Middle East, which will take him to Jordan and Israel.

During his brief stay in Israel, the Pope will meet other religious leaders and visit holy sites in both Bethlehem and Jerusalem.

In an attempt to tiptoe around the vast number of political landmines and diplomatic eggshells associated with his visit to the Middle East, the Vatican has stressed that the official papal visit is “purely religious,” calling the trip a “pilgrimage of prayer.”

But many within Israel’s ultra-orthodox Jewish communities aren’t buying it. Tensions are rising as ultra-orthodox Jews have begun protesting the papal visit. The response from the Israeli government has been aggressive. After placing three young Jewish extremists under house arrest on suspicion they were planning to disrupt the Pope’s visit, the Israeli government is deploying 8,000 additional policemen into the streets of Jerusalem in preparation for the Pope’s visit.

On Monday, Pope Francis will hold a mass at the Upper Room, which sits on the second level of the hotly contested structure known as the Cenacle. The Cenacle, which sits at the zenith of Mount Zion, is a highly venerated site for each of the world’s three major monotheistic faiths.

Here’s an image of the area below…

Christians revere the upper room, where many believe Jesus held the Last Supper and where the Holy Spirit fell on the Day of Pentecost.

Jews prize the lower level, which is considered to hold the tomb of King David.

Muslims also believe the Cenacle holds the remains of King David, but also esteem the structure as a former mosque in the 16th century during the early Ottoman period.

While the Cenacle is currently owned by the Israeli government, the Franciscans have recently been given administrative control of the property. The handover has been fraught with tensions and is just one component of the negotiations between Israel and the Vatican on a comprehensive land deal that has been ongoing for decades.

Israel’s relations with the Vatican are unique and challenging. Suspicions over the role of Pope Pius XII in aiding Nazi Germany in its extermination of the Jewish people still haunt the relationship. And historically, the Roman Catholic Church blamed the Jewish people for the execution of Jesus Christ. It was only in 1965, upon the approval of the historic document “Nostra Aetate” (Latin for “In Our Times”) by the Second Vatican Council, that Rome “officially” stopped blaming the Jews for “killing God.”

In centuries past, the Vatican enjoyed special privileges throughout Israel under the Ottomans, and later under the British. However, once the nation of Israel was born in 1948, the Vatican’s status and role within Israel came into question.

Most of the major tensions over the last several decades have arisen over the Vatican’s tax and legal treatment within the nation of Israel. Some of the Vatican’s concerns over its ancient property rights and property taxes were addressed in the signing of the 1993 Fundamental Accord. By 1994, full diplomatic ties between Israel and the Vatican were established.

Hundreds of Ultra-Orthodox Jews Protest Papal Visit to the Cenacle’s ‘Upper Room.’ Recently, rumors have arisen that Israel had conceded sovereignty over the Cenacle to the Vatican. Despite denials from the Israeli government, hundreds of ultra-orthodox Jews have taken to the streets to protest the Papal mass scheduled to be held at the Cenacle next week. Some have sprayed anti-Christian graffiti on buildings within Jerusalem. One such message scrawled in graffiti reads:

“King David, king of the Jews and Jesus is garbage’.”

Another message defacing a property owned by the Vatican reads: “Death to Arabs and Christians and all those who hate Israel.”

The recent wave of vandalism led the Vatican to call on Israel to do a better job of protecting the region’s holy sites.

One ultra-orthodox Jewish protestor explained his opposition to the Pope’s visit to the Cenacle this way:

“When ‘the crusaders’ come here making the sign of the cross and all kinds of rituals, this place will become idolatrous for us, and we will not have the right to pray there any more.”

This is all very strong language and partially helps to explain some of the tensions in the region.

Ironically, Israel’s tourism ministry said Sunday it expects Christian tourism to Israel to increase by about 10% this year, boosted by the Pope’s visit. Perhaps. But according to the Roman Catholic Church, Christians compose only 2%-3% of the population of Israel. That number has dramatically declined since 1948, at the founding of the nation, when Christians composed over 10% of the total Israeli population.

Despite Tensions, Pope Francis Shuns Popemobile. In another interesting development, the Pope has decided to leave his enclosed bulletproof Popemobile at home for his Mideast trip.

Instead, the Pope will opt for an open air Popemobile. Why? Because he reportedly wants to be “as close to the people as possible.”

This is a bold move by the Pope, especially when compared to how U.S. President Obama travels in the Middle East. Obama’s $1 million armed Cadillac limousine — which ironically broke down during Obama’s trip to Israel after the driver put the wrong type of gasoline into the tank — is designed to withstand bullets, bombs, and even bio-chemical attacks.

This type of vehicle displays either extreme paranoia or extreme practicality. Given the current level of hostilities within the region, I would suggest the latter.

Let’s hope Pope Francis’ unusually strong faith in humanity will prove his decision to be a wise one.

P.S. We will be closed on Monday, May 26, in observance of Memorial Day. Our Daily Briefing will resume on Tuesday, May 27. Additionally, our regularly scheduled radio show will be pre-empted for the holiday weekend.

Gold rises, palladium climbs to 33-month high on supply concerns, and platinum jumps to its highest level since last September.

Goldman Sachs: Here Are 50 Stocks Most Loved by Hedge Funds

Here’s a look at the 50 stocks with the largest number of hedge-fund investors, courtesy of Goldman Sachs.

There’s a mounting expectation that the European Central Bank is going to come out with aggressive policy next month.

The price of Ripple coins, the internal currency of a network designed to cheaply exchange money in different currencies, plunged Thursday after the system’s initial developer announced he would be liquidating his entire stake.

The E-Commerce Industry Is About To Explode

The proposal is the latest effort by Beijing to build up groups of Asian or developing governments to offset the influence of the U.S. and other Western governments in global affairs.

Moscow flexes military might as it tests new advanced warhead…

Russia plans to sign a contract with Iran this year to build two more nuclear reactors at its Bushehr power plant as part of a broader deal for up to eight reactors in the Islamic state.

Iran Publicly Boasts of Attack Plan Against the U.S. Navy

The plan is to use several different weapons systems in a coordinated attack, opened by high speed boats to create a diversion.

U.S. government “does not deny it routinely spies to advance American economic advantage”

“In everything I showed you that by working hard in this manner you must help the weak and remember the words of the Lord Jesus, that He Himself said, ‘It is more blessed to give than to receive.’”
Acts 20:35