Profiting from the U.S. Energy Revolution

Profiting from the U.S. Energy Revolution

FTMDaily.com – There’s no doubt that America is experiencing a massive energy revolution. And according to Jay Peroni, CFP, America’s energy revolution is not only underway, it’s for real. (Jay is the portfolio manager for our very own P.A.C.E. Investment Portfolio)

After 35 years of declining U.S. oil production, domestic supplies are rising and imports are falling.

In his latest report, Jay Peroni explains how America’s oil and gas boom is changing our nation.

He also includes four stocks that he thinks will deliver handsome profits to investors.

You can read Jay’s report here.

Sign up now and join the tens of thousands who get
the FTMDaily Briefing in their inbox every morning! >> 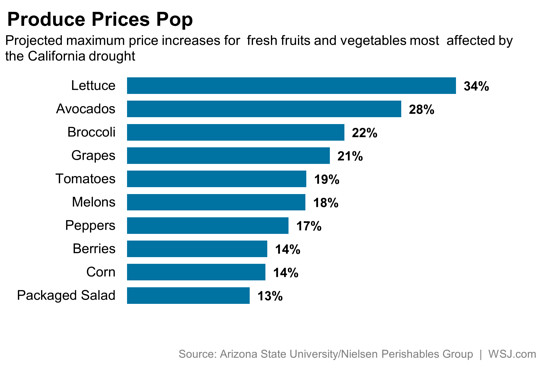 Fruit and Vegetable Prices Are Rising

It’s time to grow a garden.

Gold tumbled 2 percent, the most in 16 weeks, on speculation that a gain in U.S. consumer prices will give the Federal Reserve more leeway to reduce monetary stimulus. Palladium fell for the first time in six sessions.

China Gold Demand Rising 25% by 2017 as Buyers Get Wealthier

Gold demand in China, which overtook India as the largest user last year, will rise about 25 percent in the next four years as an increasing population gets wealthier, according to the World Gold Council.

The Nasdaq Composite is poised to go where it hasn’t gone in two years: correction territory.

Federal Reserve Chair Janet Yellen says additional capital may be required for large U.S. banks whose source of funding could be at risk during a financial crisis.

Russian Holdings of Treasuries Fall to Lowest Since 2011

Russia’s holdings of U.S. government securities fell to the lowest level since 2011 in February as tensions in Crimea escalated and the ruble weakened,.

#5… Have an abortion, get a tax deduction!

Where should you invest your money for the greatest return?

A Chinese Company 3-D Printed 10 Houses In A Day

Sticker Shock at the Steak House

A strong military response could quickly lead to heavy civilian casualties and play into Moscow’s narrative that Russian-speakers are in need of protection.

Add the U.S. Postal Service to the list of federal agencies seeking to purchase what some Second Amendment activists say are alarmingly large quantities of ammunition.

Ron Paul Group says they “plan to fight this all the way.”

New laws make it easier for the government to punish Saudis for any expressions of criticism or dissent, not only in public gatherings and traditional media, but also on social media.

More than a thousand Swedish shoppers have signed up to make payments with a swipe of their hand, paying at machines that scan the unique pattern of their veins.

Sars is an airborne virus, which spreads in a similar way to flu and the common cold.

Israel Prepares for Passover in Shadow of Peace Talks

This year, the holiday comes amid uncertainty over the future of the Israeli-Palestinian peace talks, with the sides facing an end-of-April deadline to reach a preliminary deal or agree to an extension of negotiations.

A new poll finds a sharp increase in the number of Americans who consider the Bible merely the teachings of men rather than the word of God.

“Keep your life free from the love of money, and be content with what you have.”
Hebrews 13:5