Grow Your Own Business with our Three-Step Marketing ‘Blueprint’ 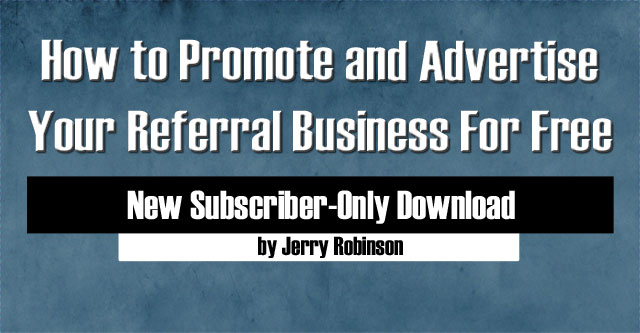 Grow Your Own Business with our Three-Step Marketing ‘Blueprint’

FTMDaily.com – Welcome back to our series on launching your very own referral business! In our last PDF download, I explained what a referral business is, along with some basic steps on how to get one started. Once you have correctly set up your referral business, it’s time to begin advertising your new venture. After all, what good is a new business without any customers!

In this just released PDF article, I am going to introduce you to some very simple ways to begin promoting and marketing your referral business. Best of all, most of the advertising techniques I am going to show you are completely free!

When I started my first referral business, I sought out all of the “free” advertising options that I could find. (What business owner doesn’t want free advertising?!) The following strategy includes three powerful steps that will not cost you a dime… only time. I know this simple and free marketing strategy works because I have personally used it numerous times to generate thousands of dollars in profits from each of my referral businesses.

Not a subscriber? Become an Gold member today and get access to our huge and growing archive of money making ideas in our Income University! Learn more here..

The world’s largest bond fund, which manages nearly $2 trillion in assets, has just upgraded its assessment on U.S. economic growth saying it now expects expansion to run between 2.5 percent and 3 percent in 2014.

The stock tumbles 15% on the news…

Warren Buffett has outperformed every stock and mutual fund on an absolute and risk-adjusted basis over the last 30 years. Now, researchers claim they have uncovered the source of Buffett’s success.

Average compensation for securities industry professionals in New York City ($360,700) were 5.2 times greater than the rest of the private sector.

President Obama will ask the Labor Department on Thursday to issue tougher rules on overtime, which could lead to extra pay for millions of workers who aren’t currently paid for extra hours of work.

OPEC Boosts 2014 Demand Estimate as Iraq Pumps Most Since 1980

Inside the Underground Sex Economy

Of the eight cities studied, Atlanta had the largest cash-based underground sex economy at $290 million a year and Denver the smallest at $40 million.

A Manhattan trader was killed Tuesday morning by a speeding Long Island Rail Road commuter train, marking at least the seventh suicide of a financial professional this year.

The Israeli Air Force launched airstrikes in the Gaza Strip shortly after 10 p.m. on Wednesday in retaliation for a massive rocket barrage earlier in the day, the largest of its kind since 2012.

CIA Director John Brennan’s decision to search Senate committee computers was such a blatant violation of the constitutional separation of powers that some pro-accountability groups in Washington are starting to seek his ouster.

Snowden leaks reveal agency has tools to infect computers with malware on a massive scale with little human oversight.

Iran has sealed an agreement to export 10 billion cubic meters of gas per year to Oman in a deal that also involves building a pipeline across the Gulf at a cost of about $1 billion.

WSJ: Who Needs to Know How to Code

People across the country are flocking to coding classes to learn how to build websites and apps.

New report says new reservoir, located 250 miles below the earth’s surface, may hold as much water as all the planet’s oceans combined.

“Do not withhold good from those to whom it is due, when it is in your power to do it.”
Proverbs 3:27