Who Rules America? A Breakdown of Wealth in the U.S. House and Senate

I received this info graphic below in an email earlier yesterday afternoon and found it interesting enough to share. The image graphically displays how financial wealth is currently distributed throughout the U.S. House of Representatives and the U.S. Senate. (Source: http://www2.ucsc.edu/whorulesamerica/power/wealth.html)

As you can see, those whom the American people have elected into office are often among the “upper crust” of society. 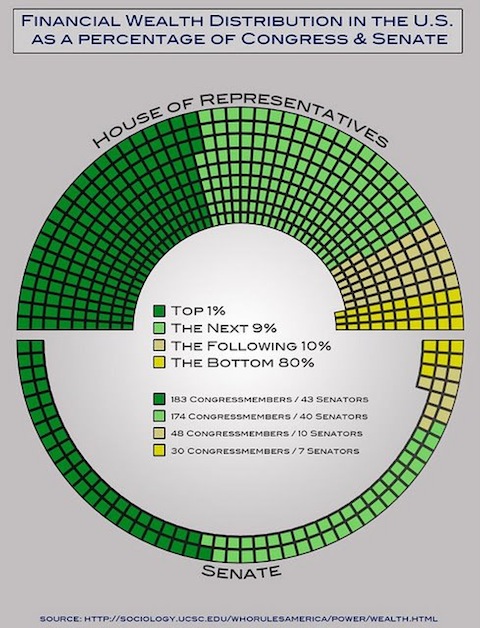 And while many politicians enter public office with large bank accounts, few realize how many of our nation’s leaders leverage their political positions to dramatically increase their wealth.

Now, as a student of Austrian economics and as a firm believer in the free markets, I am not opposed at all to leveraging one’s talents and abilities to increase wealth.

However, when public office is specifically used for private gain, we have a problem.

After all, politicians are sent to Washington with a mandate to promote the will of the people. However, America’s politicians often end up serving the wishes of their corporate masters, as well as other special interest groups.

Here’s a few hard facts on the matter…

1. Talk about the 1%. Over half of the members of Congress, who are sent to Washington on the behalf of the common man, are millionaires.

2. Legal Insider Trading? There is currently no accountability or oversight to prohibit members of the U.S. Congress from profiting in the financial markets based upon the inside information they obtain in the course of their daily work. (The news program, 60 Minutes, recently blew the lid off of the Congressional insider trading scandal. Watch here.)

I do not favor new laws on this matter. Why create new laws when existing laws already specifically define and outline the illegality of insider trading. All Congressmen should be expected to abide by the same insider trading laws that already exist and that apply to all Americans. Why should they, of all people, be exempt?

3. Federal Employees Everywhere. As of 2010, over 80,000 federal workers held jobs that earned $150,000 or more a year. That number has soared tenfold in the past five years and has doubled since President Obama took office, according to USA Today.

I have had enough of the Federal government’s overreach into our wallets and into our personal lives.

The failed Keynesian economic policies — and the welfare state that it has helped create — coupled with the warfare state that has resulted from the failed foreign policy disasters promoted by the neoconservatives has driven America to utter bankruptcy.

As the bombs drop and the government handouts continue, our financially corrupt political leaders continue to sell this nation out to the highest corporate bidders. Meanwhile, excessive power in the Executive branch continues to create a national police state as the fraudulent Federal Reserve system keeps the American Titanic afloat as our nation’s lender of last resort.

Its time to end the Federal Reserve which props up the current warfare state and return to a sound monetary system.

Its time to stop the American police state in its tracks.

Its time to end the broken welfare state that creates needless dependency on the Federal government.

Its time to get the corrupt Federal government out of our wallets, our bedrooms, and our educational system and return to the states their rightful sovereignty.

Its time for a real revolution.

END_OF_DOCUMENT_TOKEN_TO_BE_REPLACED

Segment 1: Investing in Cryptocurrencies SEGMENT BEGINS AT 00:41 About a decade ago, trading coach Jerry Robinson was introduced to cryptocurrencies and after careful research, he decided to make Bitcoin a very small component of his overall investment portfolio....

END_OF_DOCUMENT_TOKEN_TO_BE_REPLACED

(Recorded on 09/14/21) Topics covered on this video coaching call In this special video update, trading coach Jerry Robinson shares his latest economic commentary along with an important petrodollar alert and cryptocurrency update. Included in this video: –...

END_OF_DOCUMENT_TOKEN_TO_BE_REPLACED

PODCAST: Is It Time To Buy China?

VIDEO: How America Failed in Afghanistan