By Ron Paul – This week, President Obama and Vice President Biden held a hastily arranged secret meeting with Federal Reserve Chairman Janet Yellen. According to the one paragraph statement released by the White House following the meeting, Yellen, Obama, and Biden simply “exchanged notes” about the economy and the progress of financial reform. Because the meeting was held behind closed doors, the American people have no way of knowing what else the three might have discussed. 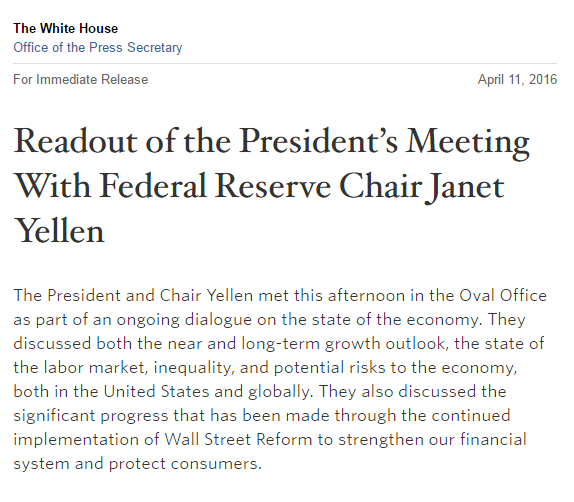 Thus the real reason for all these secret meetings could be a panic that the Fed’s eight year explosion of money creation has not just failed to revive the economy, but is about to cause another major market meltdown.

Establishment politicians and economists find the Fed’s failures puzzling. According to the Keynesian paradigm that still dominates the thinking of most policymakers, the Fed’s money creation should have produced such robust growth that today the Fed would be raising interest rates to prevent the economy from “overheating.”

Even as Yellen admits that the Fed “has not taken negative interest rates off the table,” she and other Fed officials are still promising to raise rates this year. The Federal Reserve needs to promise future rate increases in order to stop nervous investors from fleeing U.S. markets and challenging the dollar’s reserve currency status.

The Fed can only keep the wolves at bay with promises of future rate increases for so long before its polices cause a major dollar crisis. However, raising rates could also cause major economic problems. Higher interest rates will hurt the millions of Americans struggling with student loan, credit card, and other forms of debt. Already over 40 percent of Americans who owe student loan debt are defaulting on their payments. If Federal Reserve policies increase the burden of student loan debt, the number of defaults will dramatically increase leading to a bursting of the student loan bubble.

The no-win situation the Fed finds itself in is a sign that we are reaching the inevitable collapse of the fiat currency system. Unless immediate steps are taken to manage the transition, this collapse could usher in an economic catastrophe dwarfing the Great Depression. Therefore, those of us who know the truth must redouble our efforts to spread the ideas of liberty.

If we are successful we may be able to force Congress to properly manage the transition by cutting spending in all areas and auditing, then ending, the Federal Reserve. We may also be able to ensure the current crisis ends not just the Fed but the entire welfare-warfare state.