Welcome to Follow the Money’s Weekly Metals Report for the week of September 25!

In a week dominated with headlines of continued easy money from the Federal Reserve, domestic civil unrest and the sound of war drums beating in North Korea, Syria, Ukraine, Russia, and elsewhere; the metals fulfilled their intended role as a hedge against the madness of our day.

While the metals and miners were up sharply this week, mining stocks (GDX & SIL) remain below a slightly down-sloping 50MA.  The metals still have some nearby overhead resistance levels to clear before I’ll become overly confident of a sustained move to the next key resistance areas.

The Federal Reserve met on Wednesday and, as expected, relented on raising rates…again.  Of course, the usual parade of “Fe d-heads” were trotted out on the corporate controlled media to tell us that they are really, really going to raise rates in December.  The market is placing the likelihood of a December hike at 54.2%.  If rate hike expectations are diminished over the coming weeks, that 54.2% represents a lot of money that will be forced to reallocate capital and would provide a strong catalyst to propel the metals and mining stocks upward.

The Bank of Japan (BOJ) also announced changes to its ongoing money-printing experiment.  The BOJ had been printing $80 trillion yen per month to buy stocks and government bonds. Going forward, the BOJ will alter its pace of bond buying in order to target a yield of 0% on Japan’s 10-year government bond.  The intent is to elicit a steepening yield curve to benefit banks as they profit by borrowing short-term at lower interest and lending long at higher interest.

Meanwhile, geopolitical tensions escalated this week to increasingly dangerous levels in both Syria and the Korean peninsula.  In a world of unprecedented monetary madness, nuclear armed superpowers engaged in proxy wars to control world energy flows and a general populace primed for increased civil unrest, the wisdom of owning physical gold and silver has never been more timely.

Gold rallied, closing up each of the previous 5 trading days and is now, once again, above a rising 50MA.  That’s bullish.

Last Friday’s low of $1310 marked a slightly higher low and a close above $1358 would make a higher high, breaking the 6-week downtrend.  A break above $1375 would set the stage for the uptrend to resume after grinding sideways for 3 months.  We’ll see what this week brings, but for now the trend is up in all timeframes.

Should the trend reverse, $1308 has proven extremely resilient support since late June.  Below there, a rising 200MA is converging with strong horizontal support at $1250.

Personally, I’m holding off on any position trades until the $1308-$1375 trading range is decisively broken, one way or the other.  I view price anywhere near these levels to be a bargain for accumulating physical metal and dollar-cost-averaging each month can be a good strategy. 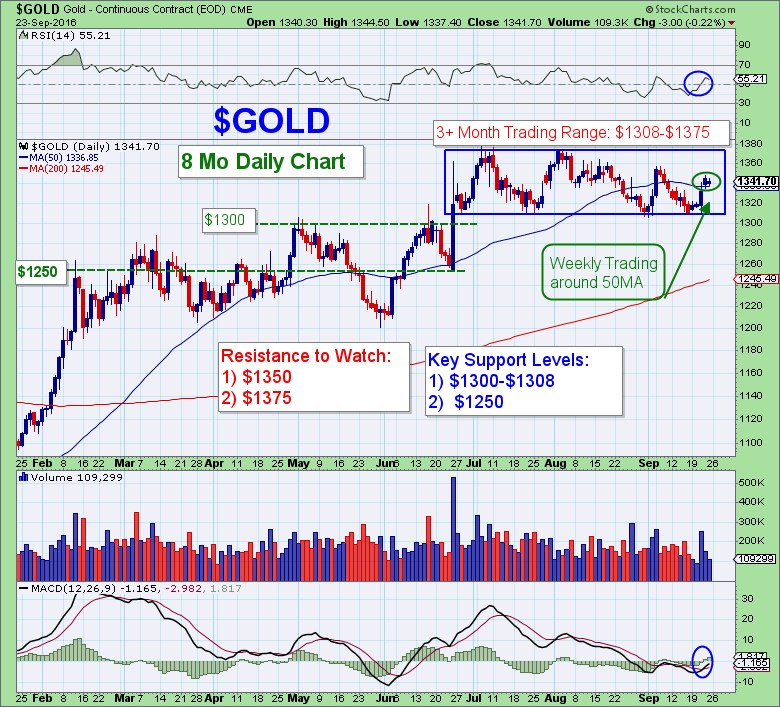 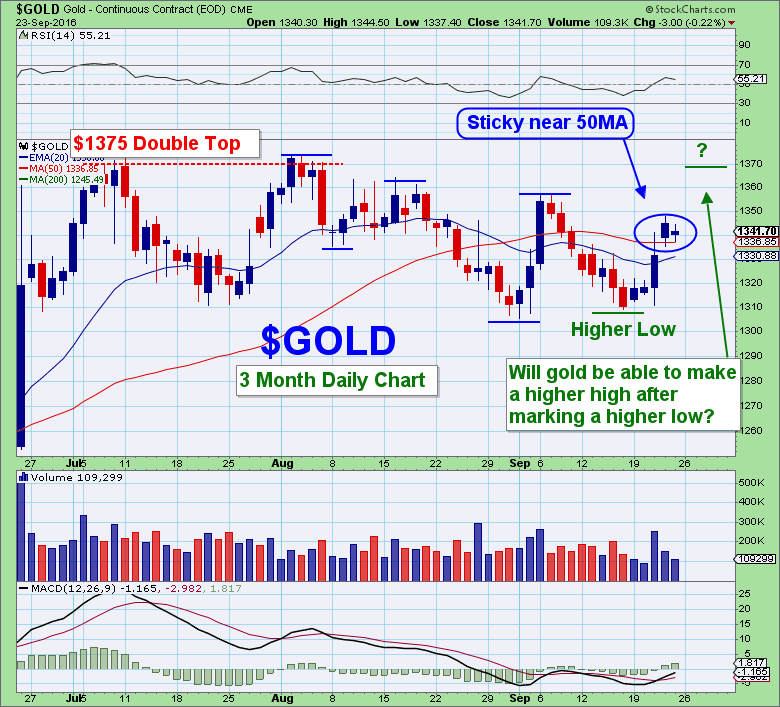 Silver traded up 4/5 days this week and closed the week at $$19.81 and back above a slightly down-sloping 50MA.

Previously resistance, $18.50 is now acting as solid support.  If $18.50 were to give way, horizontal support at $18 will coincide nicely with the bottom of the uptrend line.

I’ll be waiting for a break above $20.75 and a Trigger Trade Pro buy signal before giving consideration to any position trades.

*FTM is offering a generous promotion for the month of September….$1 for the first month. 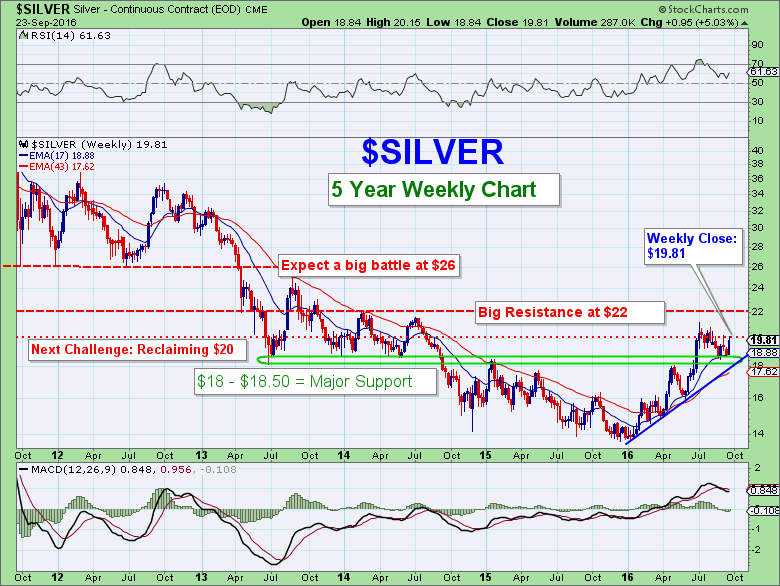 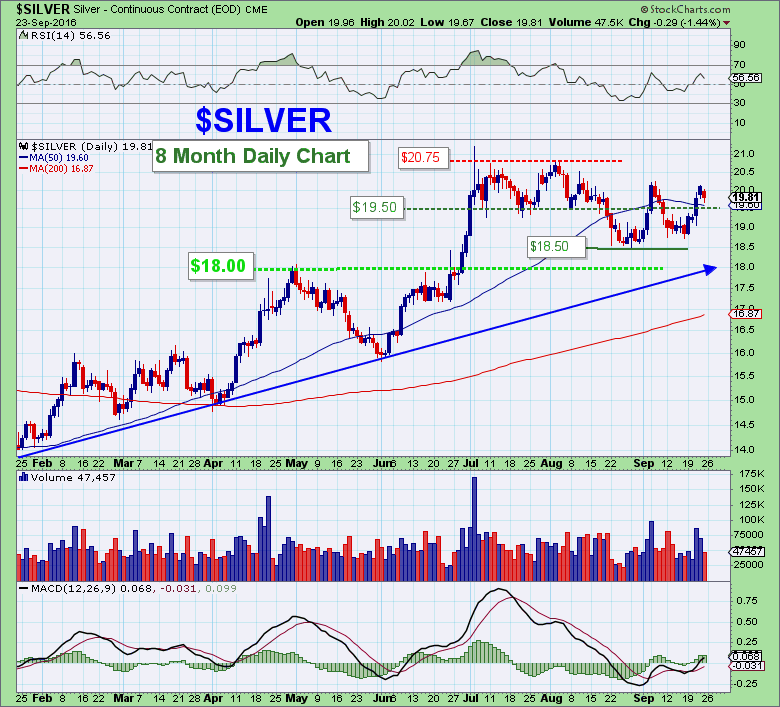 Platinum rallied nearly 4% this week and has nearly re-entered the uptrend channel.

Wednesday’s rally came on the strongest volume in a year, and retaking the 50MA ($1098) could be a precursor to a run to the top of the uptrend channel, likely north of $1200.

Platinum is trading at a historic discount to gold; a ratio not seen since 1982!  If the uptrend in the metals complex resumes, it is likely that platinum will outperform to the upside.

Should price turn lower, look for solid support at $1000 which will soon coincide with a rising 200MA.

Platinum could be presenting both a long-term buying opportunity and short-term speculative trading setup, with a stop loss near the 200MA.  (*That does not constitute financial advice and personal due diligence is always required.) 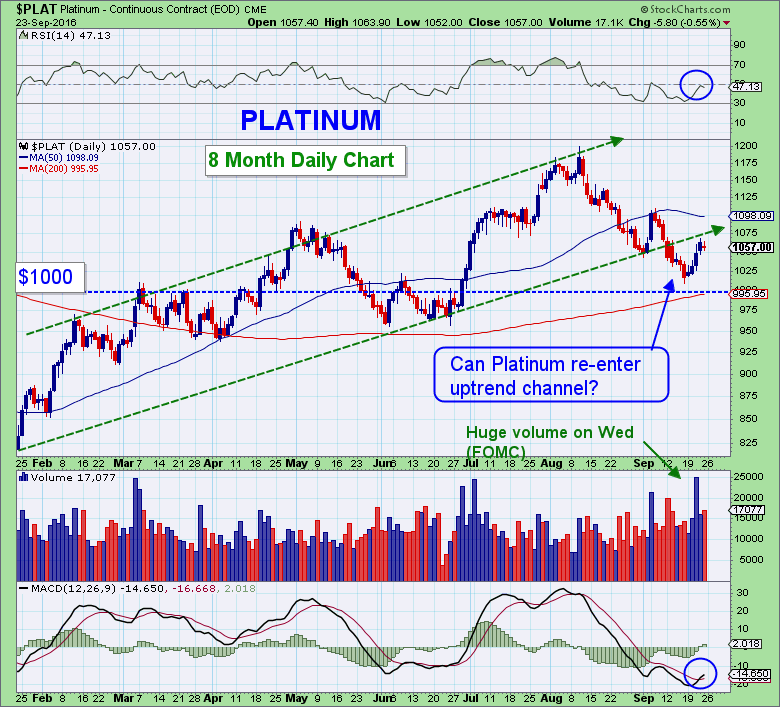 While it was a good week, the mining stocks appear weaker than the underlying metal.  Both GDX and SIL closed below a declining 50MA, finishing the week below that line for a fourth consecutive week.

On a more positive note, the miners rallied on exceptionally strong volume post-FOMC , and GDX and SIL have both cleared critical resistance at $26 and $45, respectively.

If GDX can clear $32, there isn’t much resistance until $40.  I’ll be waiting patiently for a close above $32 and a Trigger Trade Pro buy signal prior to entering any position trades in the mining stocks. 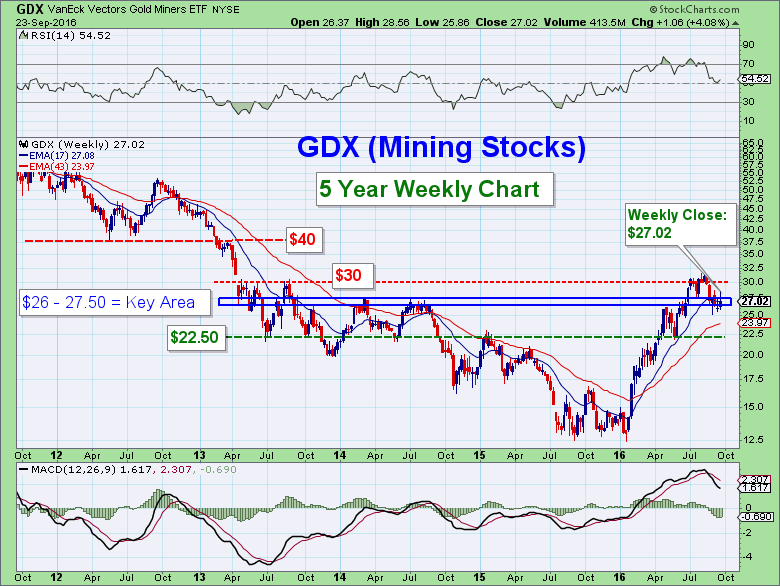 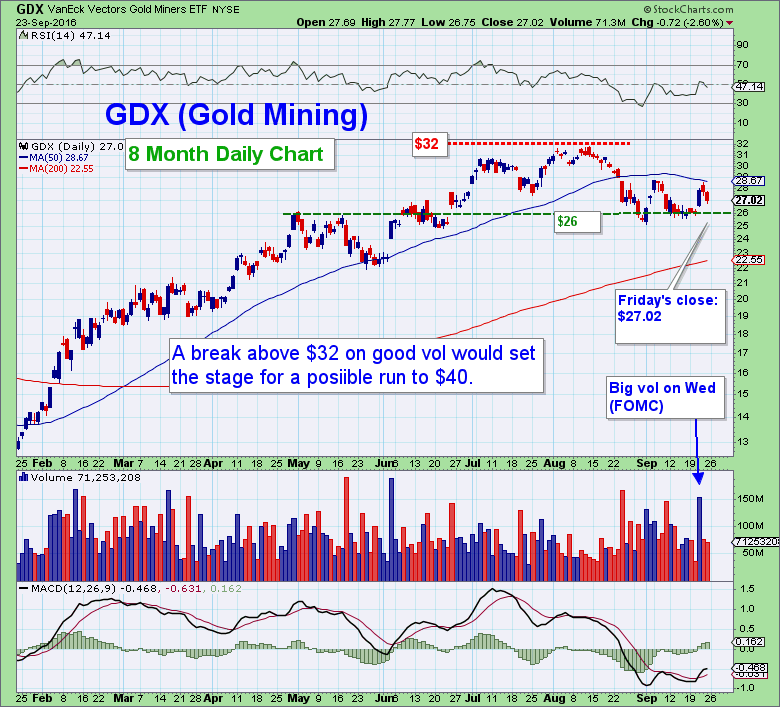 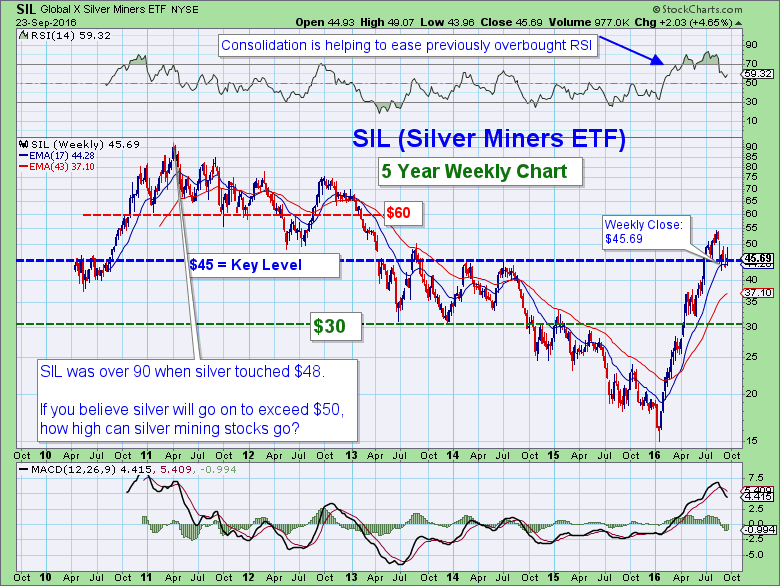 The dollar has been grinding sideways for over 18 months between $93 and $100, and is trading below a declining 50 and 200MA.  The dollar closed the week just below the recent uptrend line.

Unfortunately, the dollar trades in lockstep with the carefully crafted utterances of the monetary masters at the Federal Reserve.  Now that Janet Yellen & Co. have passed on raising rates again, we can anticipate the normal sequence of Fed goons (too cynical?:) to be trotted out professing a strong economy and promising that a return to rate normalization is just around the corner…we promise!

In the meantime, the dollar fundamentals are horrendous and is technically postured with a downward bias, as evidenced by the series of lower highs and declining moving averages.

Needless to say, if the dollar manages to break down through $93 support, that would bode extremely well for the metals.  Watch $93 on the downside. 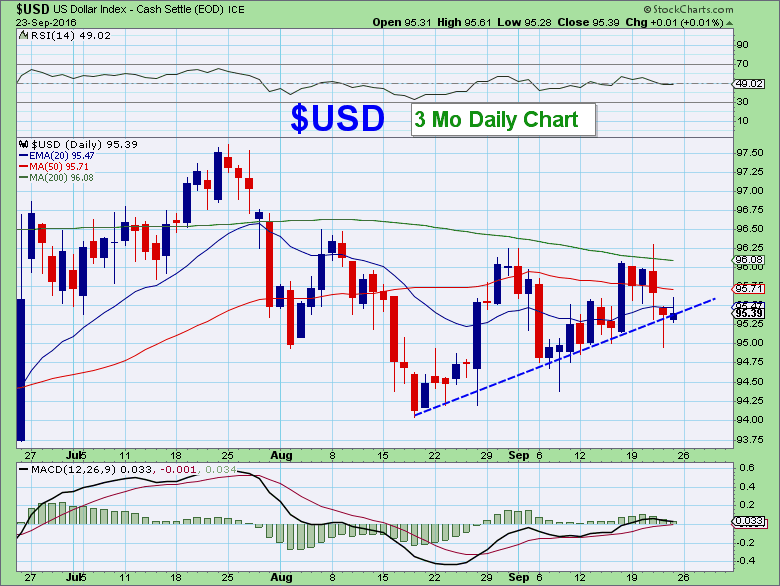 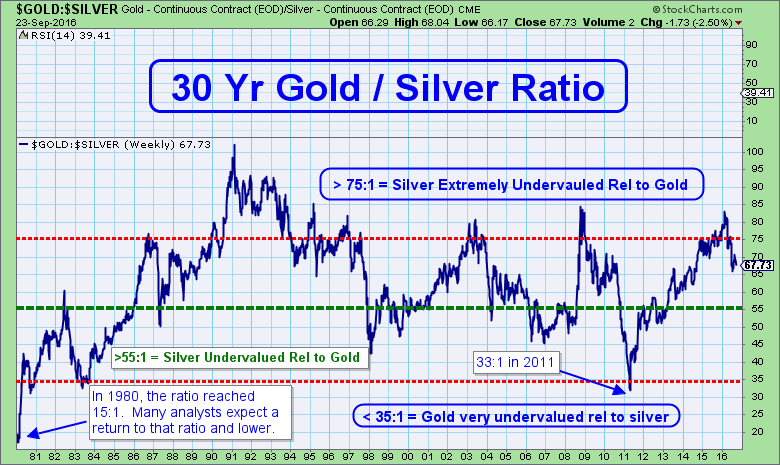 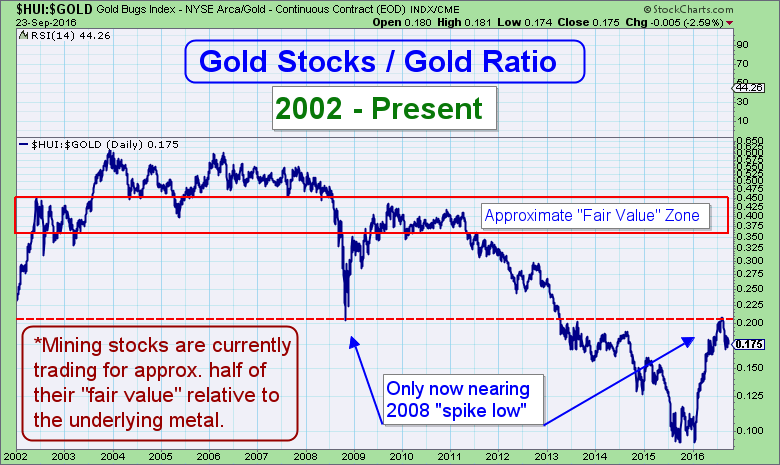 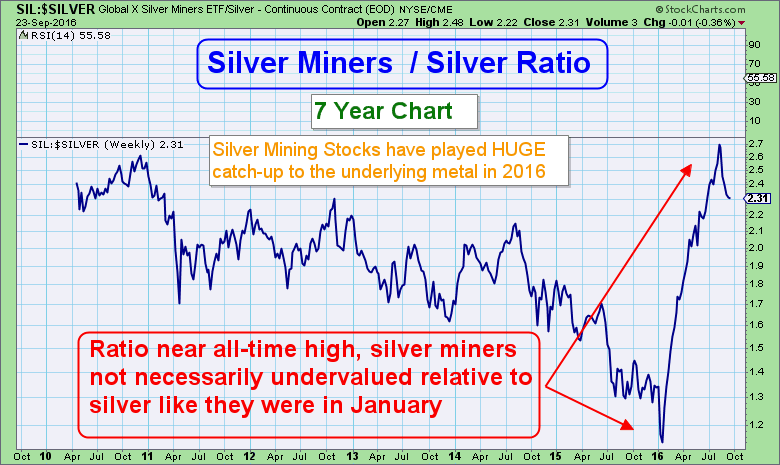 In 2016, treasuries have traded with a high degree of correlation to the metals.

After a recent selloff, treasuries rallied this week (lower yields) and a resumption of the uptrend can be expected to provide a headwind for the metals.

The government and the entire monetary system are addicted to low rates, and serve as the primary factor allowing the continual illusion of prosperity.  Every 1% rise of interest rates corresponds to roughly $200 billion of interest payments on the national debt annually.

I don’t have a degree in rocket surgery, but even I can figure out that when rates return to historical norms, the majority of federal tax receipts will go toward paying interest on the debt.  Even more ironic is the fact that we must borrow from our “enemies” to service interest payments and the whole host of the government’s other obligations.  It’s like taking out a loan from visa to pay mastercard…but I digress. 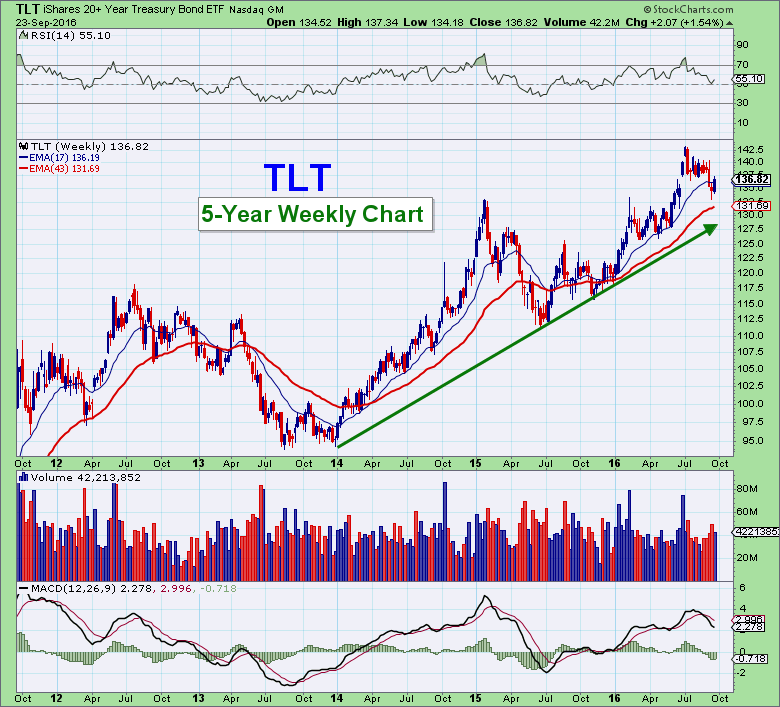 Copper rallied strongly this week, clearing both the 200 and 50MAs on convincing volume.

$2.30 represents major overhead resistance.  Clearing that level would set the stage for a run to $3.

The metals, especially silver, respond well to copper trading above a rising 200/50MA. 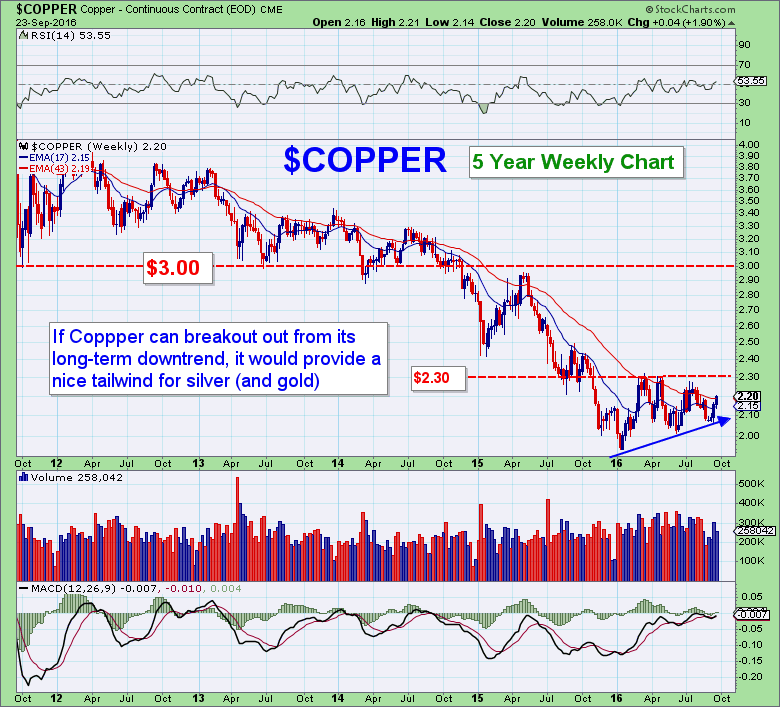 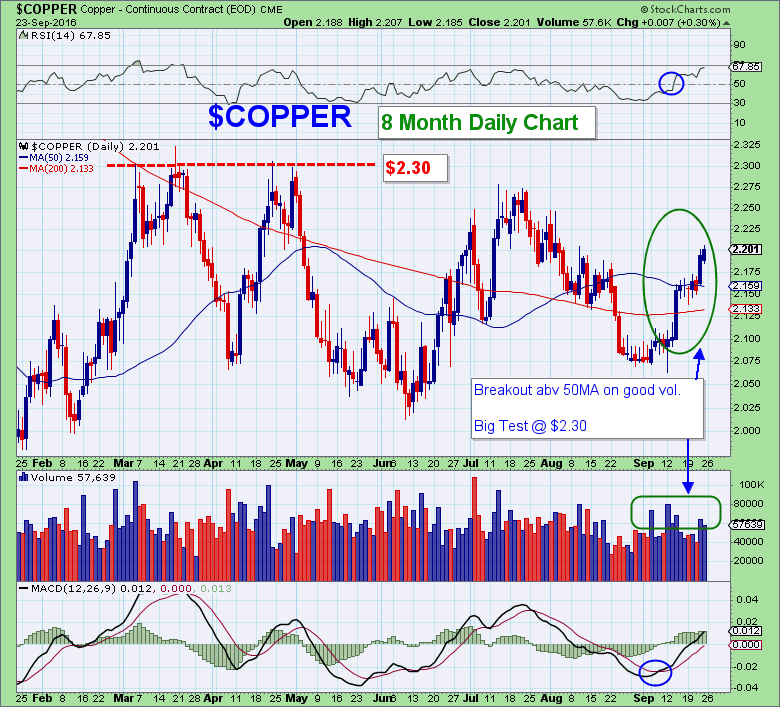 Oil closed up on the week, but sold off hard on Friday in anticipation of OPEC ministers, once again, failing to come to any sort of agreement on production freezes, let alone cuts.

Oil is working itself into a rapidly closing wedge pattern that should resolve this week.  The Petroleum Status Report (Wednesday) or OPEC meeting (Thursday) could provide the catalyst for a break, one way or the other.

A rising oil price is a positive for the metals. 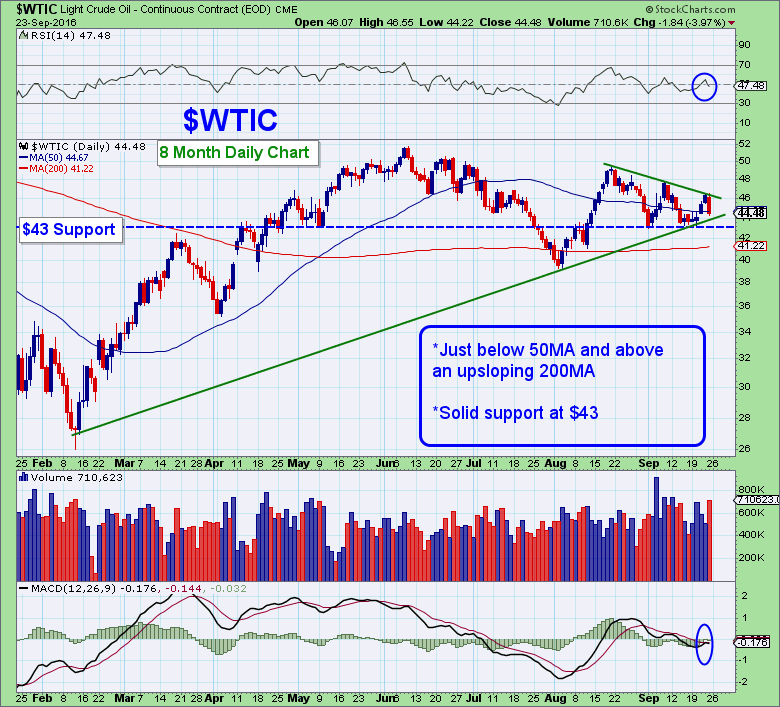 There isn’t much new to report regarding the CoT as the big banks remain positioned at historically short.  Also, the CoT data is captured on Tuesdays, leaving out the majority of the action this week that occurred after the FOMC announcement on Wednesday.

While this was a constructive weak, there are several lingering concerns.  The miners failing to retake their 50MAs, along with the Th/Fri down days are flies in the ointment.  GDX was actually down 4/5 days this week.

Also, I’m anticipating a plethora of jawboning about a rate hike in December over the coming weeks.  How the market will respond, if that comes to pass, remains to be seen, but being cognizant of the possibility will prevent becoming euphoric after the nice rally this week.  The best traders remain balanced and aware of both the bull and bear case, allowing price, volume, and the trend to speak loudest.

The big banks, led by JP Morgan, stand to lose a lot of money if the uptrend commences.  That’s concerning, being that the big banks are little more than well organized criminal enterprises masquerading as legitimate institutions.

That said, the fundamental case for having physical metal in your possession has never been greater, as there are countless potential black swans lurking on the horizon.  The banks are not all-powerful.  I certainly would not want to be short the metals in this environment that is so vulnerable to systemic shock and turmoil on all fronts.

” Better one handful with tranquillity
than two handfuls with toil
and chasing after the wind.” Ecc 4:6

“He who loves silver will not be satisfied with silver;
Nor he who loves abundance, with increase.”  Ecc 5:10

“The richest people are not those who possess the most, but need the least.” -Craig Groeschel