Welcome to Follow the Money’s Weekly Metals Report for the week of August 14!

Gold, silver, and the mining stocks remained within their post-Brexit trading ranges this week.  The growing belief that the Fed has no 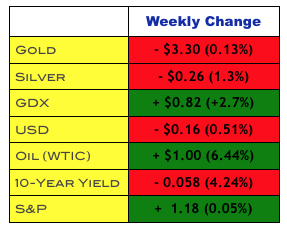 intention of raising rates anytime soon, combined with the global trend towards negative interest rates and turmoil with European banks, etc., has put a $1308/$19.25 floor under the metals since the last week of June.  Gold bears point to the Atlanta Fed’s GDPNow, which is projecting a 3.5% GDP growth rate for 3Q 2016 as well as the supposed half million jobs created over the past two months. If a flurry of massaged economic indicators were to come in that continue to support this forecast, the dollar could remain strong, pressuring the metals short-term.  Gold rallied on a poor GDP number a couple of weeks back, so it stands to reason that the metals would be tempered by a good GDP print.  There’s precedent for especially rosy economic numbers to be put out leading up to an election, only to be revised back downward after the establishment favorite has secured the office.  Positive economic data benefits Clinton and acts as a headwind for Trump.  As a trader/investor, it is wise to remain cognizant of the incentive to “massage” the data.

That said, Friday saw the release of dismal retail sales, consumer confidence, and productivity numbers.  Underneath the veneer of a 4.9% unemployment rate, a 3.5% 3Q GDP projection, and the soothing sounds uttered by politicians, lies dense structural rot that will assert itself in the fullness of time.  What matters to traders and investors in the short-term, however, is the market’s perception, not necessarily the reality.

Yes, the excessive tomfoolery is getting to be so prevalent that it’s difficult for everyday working people to keep up.  Hopefully, these weekly reports are useful to you in condensing the plethora of weekly news events and trends into an easily digestible format, thereby allowing you to stay well-informed without being inundated.  I look forward to continually improving the content and format each week to serve you better.

If you find yourself overwhelmed by all of this and are looking for a sensible place to start your “action plan,” I would point you to the “Five Levels of Financial Freedom”, an absolutely outstanding free resource.

All of this week's 15 gold and silver charts/graphs are exclusively for FTMDaily members. Members, log in here to view the full article with all charts. Not a member? Learn more here. 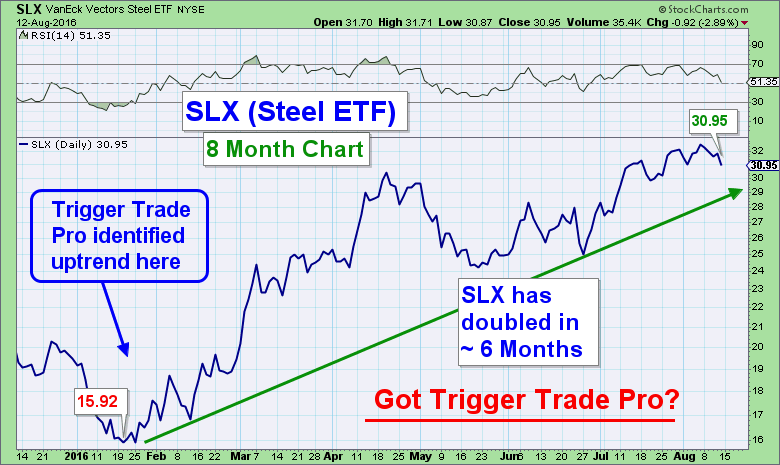 Above is a chart highlighting one of the many powerful trends being tracked at Follow the Money.  Even with the broad stock market trading mostly sideways, there are still plenty of opportunities to profit from powerful trends like this.  As a member of the FTM Pro Trader community myself, I can personally attest to the powerful combination of the Profit Trakker software and the twice weekly live (also recorded) conference calls with Jerry Robinson.

“Gold is set to benefit from a “perfect storm” of dwindling investment alternatives and greater investor risk, according to the August report of the World Gold Council (WGC)….It says central banks are increasingly pulling out all the stops to stimulate growth, which has driven yields on government bonds to absurdly low levels….Investors have to take on additional risk to generate any sort of meaningful returns. And this search for returns is pushing investors toward gold to balance the risk, according to the WGC:

“In this environment, we believe investors are using gold to hedge portfolio risk as they add more stocks and low-quality bonds to their asset mix.”

In its report, it pointed to weak demand for 10-year Japanese government bonds at a recent auction as evidence that investors are losing faith in “unconventional monetary policies…”

“The first panacea for a mismanaged nation is inflation of the currency; the second is war.  Both bring a temporary prosperity; both bring a permanent ruin. But both are the refuge of political and economic opportunists.”