In the case of King v. Burwell (Case Number 14-114), petitioners argued that the language of the Affordable Care Act (ACA) specifically provides that health insurance subsidies can only be issued through state-based exchanges (also referred to as marketplaces) and not through the federal exchange. In a 6-3 decision issued June 25, the U.S. Supreme Court upheld the ACA by confirming that health insurance subsidies may also be offered through the federal exchange.

What is the issue?

At issue is a specific provision in the ACA authorizing subsidies for health-care coverage purchased “through an exchange established by the State.” The IRS has interpreted the law to include subsidies for health insurance purchased through either state-based exchanges or the federal exchange. The petitioners alleged that the IRS could not promulgate regulations to extend tax-credit subsidies to coverage purchased through exchanges established by the federal government.

What did the Court decide?

Writing for the majority, Chief Justice John Roberts acknowledged that the language of the ACA relative to exchange tax credit provisions is ambiguous. However, given the intent of the ACA as a whole, “the statutory scheme compels us to reject petitioners’ interpretation because it would destabilize the individual insurance market in any state with a Federal Exchange, and likely create the very ‘death spirals’ that Congress designed the act to avoid.”

Citing studies that suggest that eliminating the tax credits could lead to insurance premiums increasing by as much as 47%, while enrollment might decrease by upwards of 70%, Roberts opined that “it is implausible that Congress meant the act to operate in this manner.”

What states have their own exchanges? 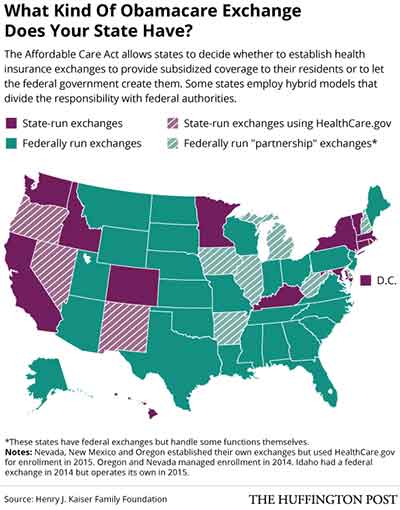 As gleaned from the Court’s majority opinion, 16 states and the District of Columbia operate their own state-based exchanges.

The federal government operates exchanges in the remaining states.

What if the Court ruled against the ACA?

According to the Wall Street Journal, more than 6 million people would have lost health insurance tax credits if the Court ruled against the ACA.

As of March 2015, the Department of Health and Human Services estimates that 16.4 million are covered due to the ACA.

RELATED: 7 Ways To Save Money Under Obamacare