Russia, Syria and the Clash of Empires

Today’s post is free and open to the public. 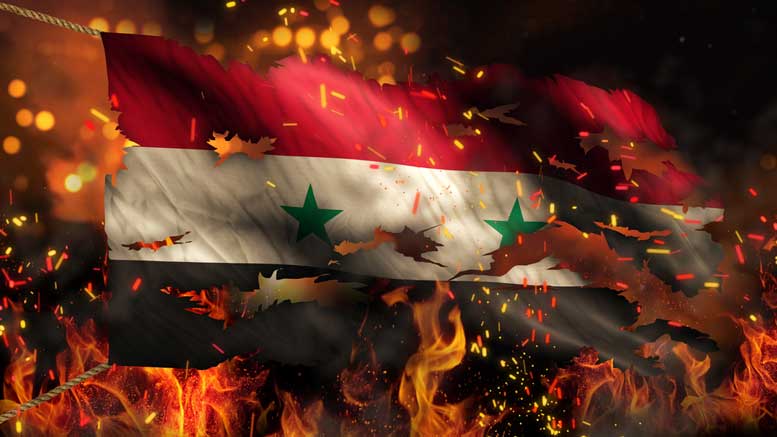 ANALYSIS: Russia, Syria and the Clash of Empires

Two days after U.S. President Barack Obama and Russian President Vladimir Putin smiled and shook hands in front of cameras, Moscow launched surprise airstrikes in Syria giving Washington only one hour’s notice. While Russia claimed these airstrikes would target the growing Islamic State fighters in the region, tensions quickly flared when the U.S. began accusing Moscow of bombing its own groups of “rebel” fighters in Syria. Ironically, many of these so-called “rebels”, which Washington stresses are “moderate” Islamists, include members of groups that have been trained and equipped by the CIA and are affiliated with Al Qaeda.

Over the last few years, the CIA has trained thousands of “rebels” in secret bases in Jordan with the aim of taking down the current Syrian regime led by President Bashar Al Assad. To that end, the CIA has used millions of U.S. taxpayer dollars to equip these “moderates” with arms, including anti-tank missiles, as well as intelligence and high-tech communications equipment.

However ridiculous and disastrous the CIA’s arming and training of “moderate” Islamists may seem, it has actually been more successful, relatively speaking, than similar efforts by the Pentagon. The parallel operation, led by the Pentagon which seeks to train and equip other regional Islamist fighters to battle against ISIS, has been catastrophic as the Pentagon’s trained fighters have been routinely captured by an Al Qaeda affiliate, along with their U.S. weapons. Thanks to the Pentagon’s inept operation, rogue terrorist groups across the region now drive U.S. humvees and enjoy massive firepower, all paid for by the U.S. taxpayer.

As deplorable as America’s Middle East policies were under U.S. President George W. Bush, they have become even worse under President Obama.

Since 9/11, Washington has manipulated public opinion (and ignorance) to carefully orchestrate a particular narrative that suits their ultimate goals in the Middle East. These goals, which most often coincide with whatever the oil-rich Gulf sheiks demand, have included:

Also among this list is an attempt to overthrow Syrian President Bashar Assad who made the fatal decision to reject the Arab Gas Pipeline in favor of the Iran-Iraq-Syria (or the “Islamic”) pipeline. Most Sunni Arabs view the Islamic Pipeline as a Shi’ite pipeline serving Shi’ite interests. After all, it originates in Shi’ite Iran, passes through Shi’ite-controlled Iraq, and ultimately flows into Shi’ite controlled Syria. So far, the Sunni Gulf nations have violently opposed Syria’s adoption of the Islamic Pipeline by bankrolling opposition fighters within Syria in an effort to destabilize the nation.

The Middle East is consumed with religious hatred and is embroiled in religiously-motivated wars. While the actual tensions are economic in nature (like pipelines, resources, etc.), they are exacerabated by religious hatred.

Middle Eastern Sunnis have no desire to share their stronghold of power with their Shi’ite counterparts.

Togther with its Western allies, Saudi Arabia, Qatar, Turkey, and other Sunni powers have taken extreme measures to prevent any competition for power by the region’s Shi’ite controlled nations.

For years, the grueling Syrian “civil war” has been fictitiously depicted the by the West (and Sunni powers) as a genuine democratic uprising. However, the evidence suggests that Syria’s struggles are rooted in foreign intrusions and attempts at overthrowing the existing regime to ensure regional domination for the provocateurs, typically with support from the U.S., UK, and others.

For example, we recently learned that the overthrow of Syrian Present Assad has been a plan long in the making by the West in cooperation with their Gulf allies. A secret cable made available by Wikileaks from 2006 reveals the plot to overthrow Assad through the exploitation of regional extremists. This leak confirms our suspicions and sheds much needed light on the current crisis. But don’t expect the mainstream media to report on these facts. The blood of hundreds of thousands of lives on the hands of Washington — and its oil-rich allies in the region — will not be televised or broadcast. Instead, it will be deflected towards others.

In the wake of Russia’s new bombing campaign in Syria, President Obama decided to approve a new escalation of military action against ISIS in Syria, which reportedly includes direct U.S. weapons shipments to Syrian Kurdish and Arab “rebel” fighters as they make their approach towards the ISIS stronghold of Raqaa. U.S. coalition airstrikes against ISIS from Turkish air bases will also likely intensify.

But Washington’s recent upgrade in military support against ISIS speaks volumes considering that, until now, similar military operations against ISIS have been a total failure. A simple and rational explanation for this is that Washington has viewed ISIS as useful stooges who keep American support for military action in the region elevated. Of course, the U.S. military has the capacity to bomb ISIS into oblivion. But until now, that has clearly not been Washington’s goal. Instead, Washington’s approach toward ISIS has been a strategy of containment, not destruction, as they serve the broader regional aims of both Washington and it’s thuggish Sunni allies in the region.

That’s partially why Russia’s recent intervention into the region has caused so much consternation in Washington. Under President Obama, the Pentagon has been slow at dealing with ISIS. Until now, there has been little hope that the U.S. military had a plan to destroy the broader goals and ambitions of the Islamic State.

“The confusion and propaganda that swirls around Syria has all the feel of a build-up to another major world war. “

Now, however, Russian President Vladimir Putin has seized the moment and is using his vast military might to actively engage terrorists (of all stripes) across Syria. (If this is actually true, then it no doubt has Washington terrified; for if Putin does indeed scare off and/or destroy the Syrian “rebels”, the West will be checkmated, being forced between openly supporting ISIS or Assad.)

Over the weekend, the Russian Ministry of Defense stated that it had conducted 60 bombing runs in 72 hours, hitting more than 50 ISIS targets. 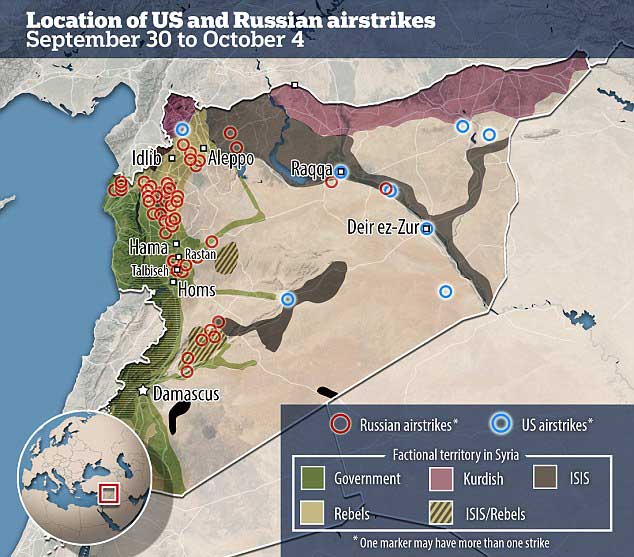 Later, it was reported that the Russian military had annihilated a top ISIS command center near their stronghold city of Raqaa. The Russians provided the following video as proof…

If Russia keeps up this pace, it will devastate ISIS in a matter of weeks. If this occurs, Washington’s failure to rid Syria of extreme terrorists, despite numerous “bombing campaigns”, will be one of its most embarrassing foreign policy blunders in history. (While Russia is busy dropping bombs on terrorists, the U.S. military bombs hospitals.)

But more importantly, it will expose the fact that Washington was never really interested in helping Syria in the first place. (This would further confirm the Wikileaks document that revealed Washington’s plans all along have been to destabilize Syria to the point of Assad’s overthrow, regardless of how many innocent deaths it may cause.)

Putin pointed out this fact in painstaking detail last week when he questioned why Russia was facing tougher economic sanctions than ISIS? To their chagrin, Washington responded by immediately ramping up financial sanctions against known ISIS elements.

On a side note, I personally believe that there is a compelling case to be made that ISIS is nothing more than a creation of the West and its allies (namely, Britain, France, Saudi Arabia, Qatar, Turkey, Israel and Jordan.) You can read more explosive evidence on that here.

Meanwhile, here in American, there has been a virtual media blackout regarding the Russian military successes at devastating terrorists in Syria. Washington has accused Russia of launching attacks against its own CIA-trained Al Qaeda affiliates in the region instead of against ISIS.

Let me repeat that…

The U.S. is complaining that Russia is bombing its own “friendly” Al Qaeda associated terrorists (a.k.a. “rebels”) instead of bombing ISIS fighters. If this is not the theater of the absurd, I don’t know what is.

Meanwhile, Saudi Arabian religious leaders are calling for a full-scale jihad against Russia for its actions in Syria. After all, the Saudis have spent millions in training and armaments for many of the Islamic extremists running roughshod across Syria, even those who the U.S. claims are too extreme to support or finance. It should come without surprise that Russia’s recent military actions in Syria have placed a great strain on its relationship with Arab states.

Complicating matters even more is Iran’s support of Russian airstrikes in Syria. The alliance between these two countries has long been a thorn in the side of Washington and the Arab states, particularly in economic matters.

In the coming days, we may see all of this come to a head in a full ground invasion in Syria.

There are still rumors that Iranian troops will join 150,000 recently-drafted Russian troops in a ground assault in Syria in the coming days. After all, Russia knows that airstrikes alone are worthless without boots on the ground.

Putin’s bold military moves in Syria come just days after the Obama administration threatened Russia with the announcement of major nuclear weapon upgrades in Europe, which include the first guided nuclear bombs in America’s arsenal.

These highly advanced nuclear weapons, known as B61-12 bombs, will be deployed in Germany and are 3-4 times stronger in power than those dropped on Hiroshima.

The posturing by world powers is becoming extreme. And Russia is not likely to back down any time soon. That Washington understands the serious nature of the present situation was seen in a hardly noticed headline from CNSNews entitled: “HHS Boosting Nation’s Stockpile of Burn Treatments in Case of Nuclear Attack”

The confusion and propaganda that swirls around Syria has all the feel of the build-up to another major world war.

With so many national interests at stake in Syria’s outcome, there is always the possibility of miscalculation. One false move, even if wrongly interpreted, could escalate tensions in a region all too familiar with final standoffs of world powers.

Let’s hope cooler heads prevail. And let’s pray for those innocent victims who remain caught in the crosshairs of clashing empires.