Welcome to Follow the Money’s Monthly Metals Report for the month of October!

Although the metals traded lower this week, it was at least refreshing to enjoy a brief lapse of Federal Reserve monetary escapades dominating the headlines. You know it’s bad when I’m content to see the metals trade lower in exchange for being spared having to endure another Fed speech!  I’m just kidding, but seriously.

The media was all worked up this week about the growing realization that all is not well in the European banking system, specifically with Germany’s Deutsche Bank.  While the situation is certainly dire, it’s typical of the mainstream financial press to wait until the system is on the brink of failure to give coverage.  Those banks dubbed “too-big-to-fail” in the wake of the 2008 crisis are much bigger, more highly leveraged, and have balance sheets more rotten to the core than they did 8 years ago.  With Deutsche Bank sitting on the cusp, German officials are stuck between a citizenry with no tolerance for more bail-outs and a European banking system in desperate need of one.  Alternatives include a bail-in or simply allowing some banks to fail.  To paraphrase Jim Grant, You cannot fix a solvency crisis with liquidity.  The big banks are insolvent, and while another dose of money printing may delay the reckoning, it will ultimately make the problem worse.  In a system ripe with inherent counterparty risk, physical metal is one of the very few assets that are not simultaneously someone else’s liability.  Thursday’s brief panic gave metals investors a glimpse of how the market may initially respond if a 2008 style event were to re-emerge.  On Thursday, when shares of DB were plummeting, gold, the dollar, and treasuries rallied.  Silver was flat and the S&P was down sharply.  In 2008, the metals sold off in conjunction with nearly everything else, but were subsequently amongst the first to rebound.

On Wednesday, OPEC agreed, in principle, to a production cut beginning in November.  The cartel decided to cut its production by 750,00 mb/d, although details are to be finalized in November. The tentative agreement caused oil prices to surge over 6 percent on Wednesday, and by another 1 percent on Thursday.  Because specified production limits were not allocated to individual countries, there remains a great deal of uncertainty surrounding the agreement.  We’ll have to keep an eye on how this unfolds, as rallying oil prices can provide a tailwind to gold, and especially silver.  True supply/demand fundamentals would inspire more confidence in this move than promises made by a “cartel” of untrustworthy participants.

Interestingly, in a 1998 testimony before the House of Representatives on derivatives trading, Alan Greenspan said the following:

“…private counterparties in oil contracts have virtually no ability to restrict the worldwide supply of this commodity. Even OPEC has been less than successful over the years. Nor can private counterparties restrict supplies of gold, another commodity whose derivatives are often traded over-the-counter, where central banks stand ready to lease gold in increasing quantities should the price rise.”

This quote, although made nearly 20 years ago, has especially timely implications because it illustrates two notable points:

I also find it ironic that the head of one cartel (Federal Reserve) cast doubt on the ability of another cartel (OPEC) to influence free-market prices, while in the same breath admitting to his own price suppression scheme.

As of October 1st, the Chinese Yuan now officially makes up 10.92% of the Special Drawing Rights (SDR) currency basket issued by the International Monetary Fund, making it an official reserve currency.  While this is highly significant over the intermediate to long-term, be weary of the hype circulating that this will result in an immediate “dollar crash.”  Global monetary elites do appear intent on advancing the SDR as the global reserve currency, but the SDR still lacks a deep enough bond market and is not immediately suitable as a viable replacement for the dollar.  Both the BIS and the IMF have, however, put forth proposals and white papers that lay the framework for that to occur.  In August of this year, the World Bank was approved as the first SDR bond issuer in China.  This is a trend we’ll be monitoring very closely. 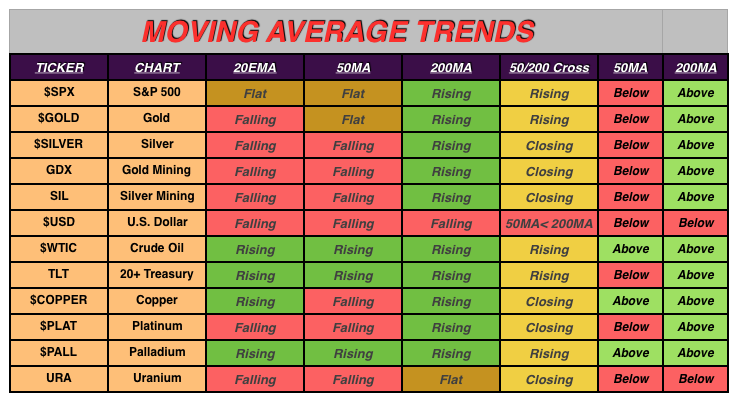 On the long-term chart, gold looks very strong.  The multi-year downtrend is clearly broken, and I expect much higher prices going forward.  When the fundamentals are taken into account, it’s reasonable to expect the gold price to trade multiples higher than its current artificially suppressed price of $1317.

The short-term is less clear, however.  Gold is back below its 50MA and has printed a series of lower highs over the last 3 months.  It is working itself into a descending triangle that may not resolve itself for another 4-6 weeks.  It’s a bearish signal that the recent fundamentals of the Fed failing to raise rates in September, growing concerns regarding European bank solvency, and heightened geopolitical tensions have not provided an adequate catalyst to propel gold to new highs.  (Yes, the heavily short commercial banks, led by JPM, have clearly had a hand in keeping price in-check by issuing overwhelming amounts of paper gold (and silver) contracts on the COMEX.)

Solid support remains in the area of $1300-$1308, with very solid support at $1250.  The rising 200MA, currently $1252, should act as support if selling intensifies.  The banks are once again back to holding record short positions and would like nothing more than to see $1300 give way.

On the upside, the initial hurdle is the 50MA ($1336) which roughly coincides with the downtrend line.  After that, $1350 and the previous intraday high of $1375 can be expected to act as resistance.  Clearing those levels on convincing volume will be the first technical signal that gold is ready to continue its advance higher.

For long-term acquisitions of physical metal, I view anything below $1500 gold and $30 silver to be an absolute bargain.

For shorter-term trading, however, the current technical posture does not present a favorable risk/reward set-up for taking any trading positions. Personally, I’m building cash to take advantage of better opportunities that are sure to present themselves in the weeks and months ahead, when the short-term direction is more clear.

**Going forward, I’ll be putting out shorter commentaries on a weekly basis for FTM members that focus more on the shorter term price movements, identifying specific trade set-ups and profiling miners with top Smart Scores, while keeping the monthly issues free to the public.

*FTM is still offering a generous Fall promotion where the first month of membership is just $1, and no commitment after that. 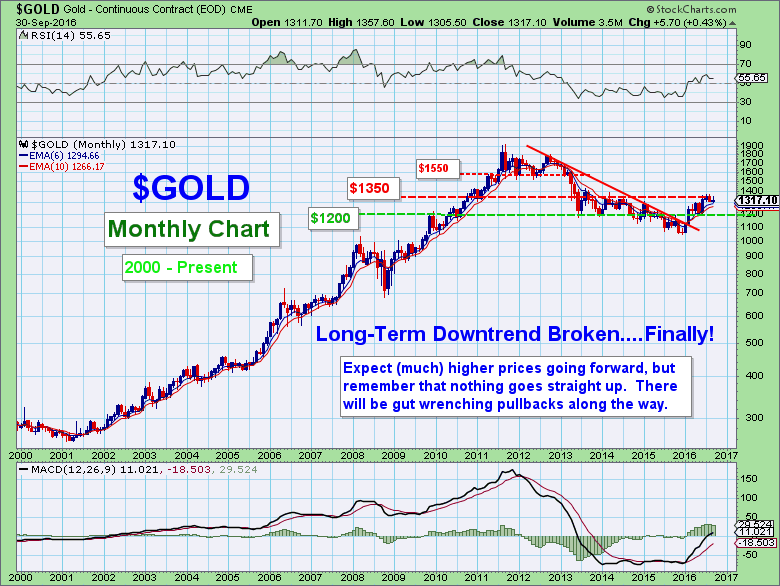 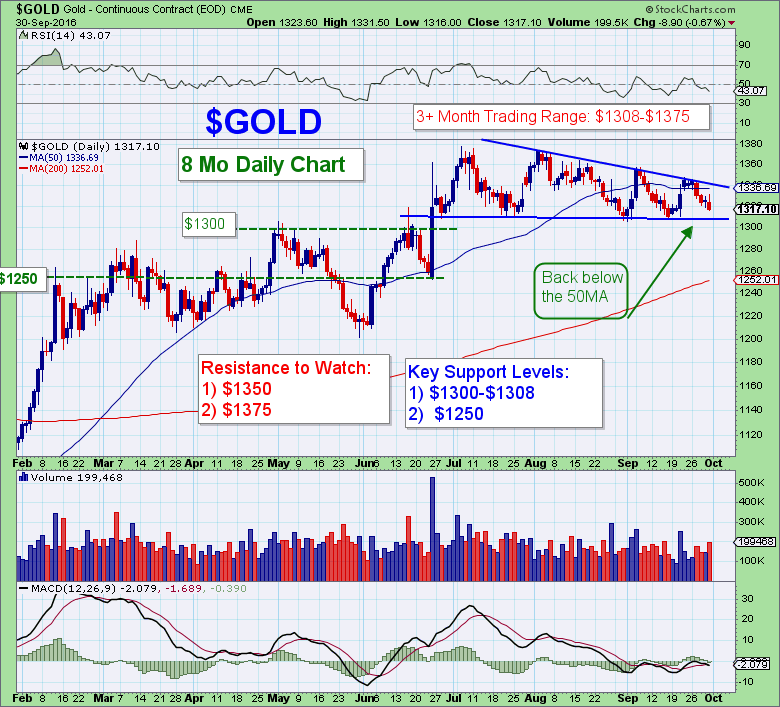 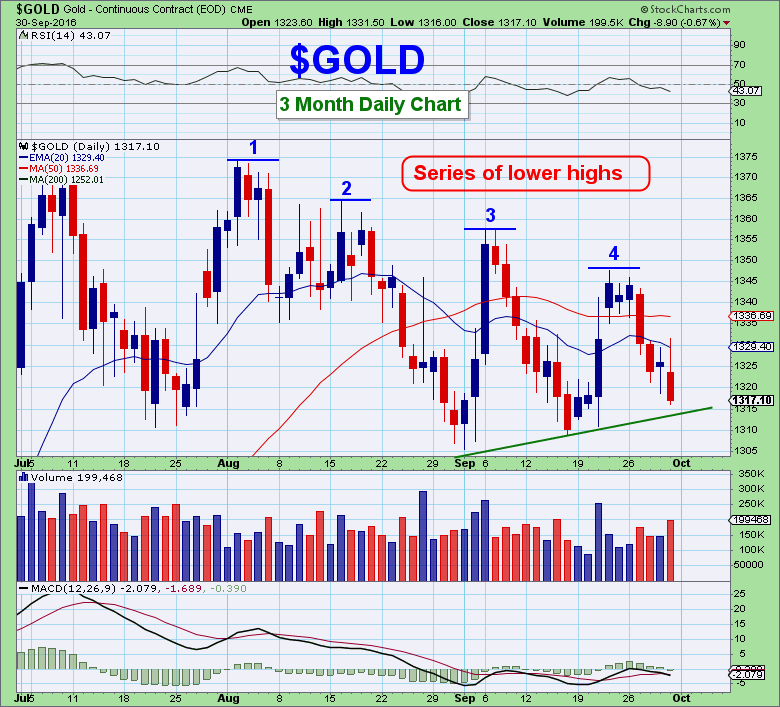 That said, silver is struggling to break out of its 3-month trading range and is looking a bit heavy on the charts.

The three-month series of lower highs and higher lows is forming a wedge pattern that should resolve itself over the next several weeks.

If the break occurs to the downside, look for very solid support at $18.50.  Below there lies strong support at $18, which coincides nicely with the rising uptrend line.  If selling were to really accelerate, the rising 200MA will provide additional support, currently $17.00.  I certainly don’t expect that, but anything is possible.  A pullback to the $17-$17.50 area would represent an approximate 50% retracement of the previous run from $14 to $21.

Upside resistance levels to watch are the 50MA, coinciding with horizontal resistance at $19.50. Clearing the previous closing high of $20.50 would set the stage for a resumption of the uptrend. When $20.50 is cleared and a buy signal is generated in Trigger Trade Pro, I’ll likely consider a position trade, as there is little resistance until the $22 level.

Remaining on the sidelines, for now, is likely prudent. 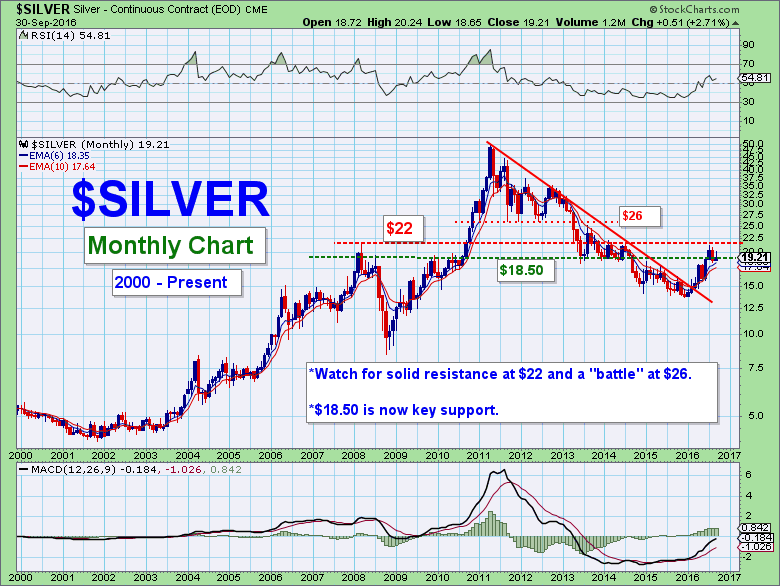 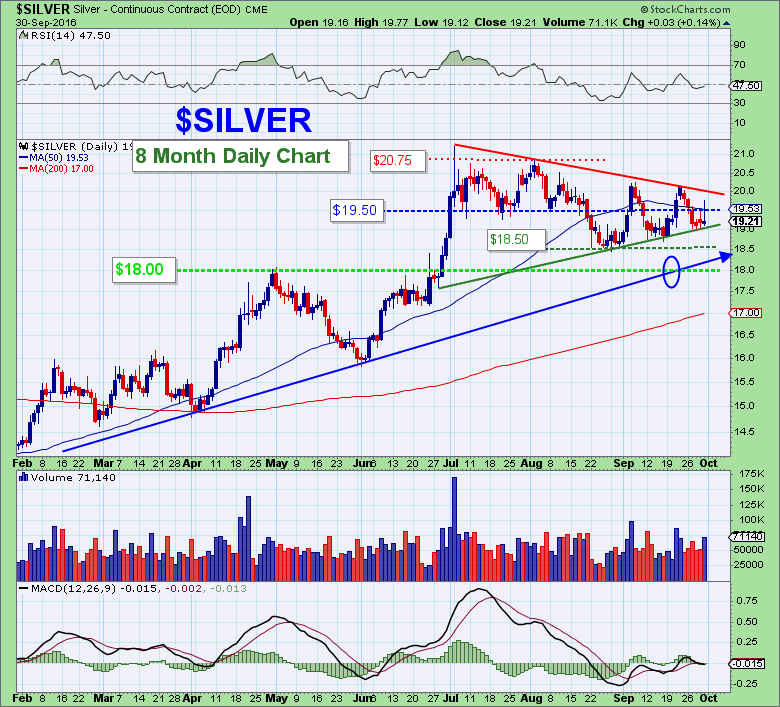 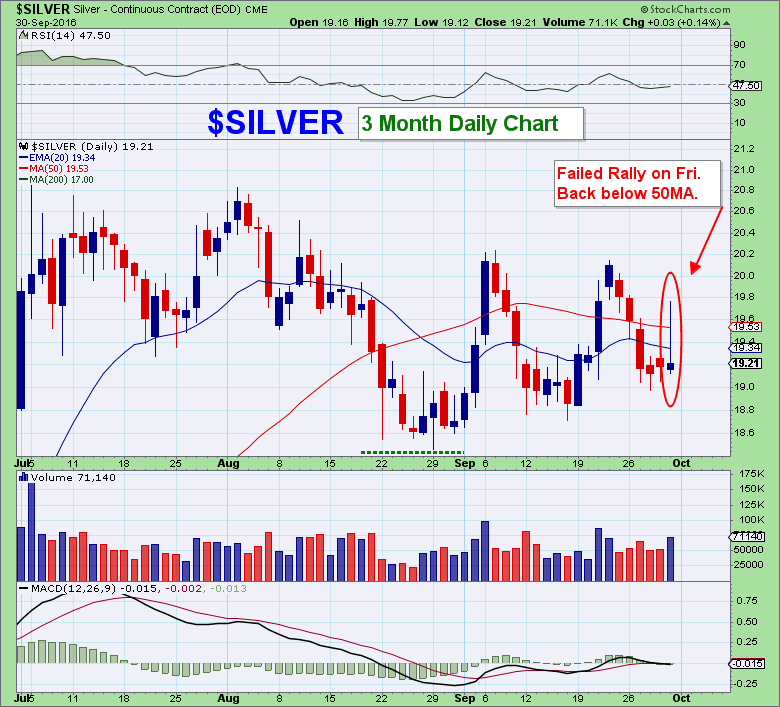 Platinum, having failed to re-enter its uptrend channel, is now below a downtrending 50MA and in an intermediate term downtrend.  Platinum has traded below its 50MA since August 22nd.

There is solid support at $1000, which coincides precisely with the 200MA. 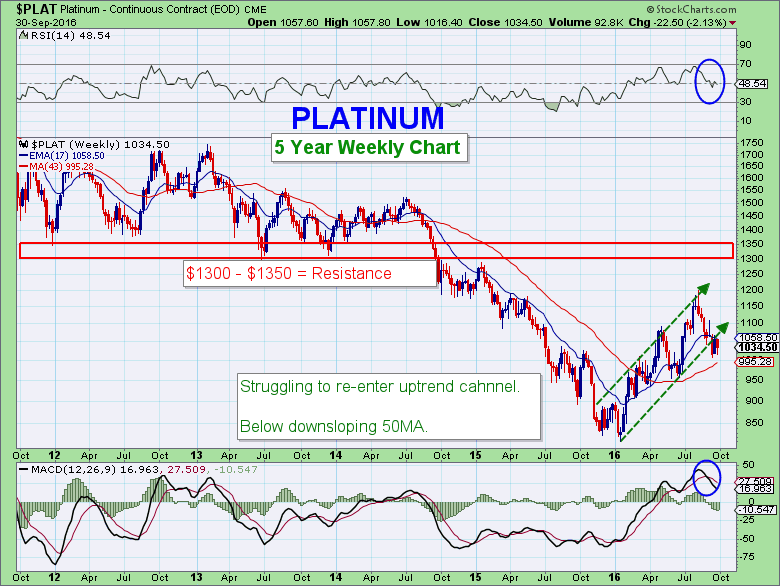 After the nice rally last Wednesday following the FOMC, the gold miners have failed to follow through with much buying.  GDX is clinging to support at $26 and has traded below the 50MA since late August.

On the upside, once the August high of $32 is cleared, there isn’t much resistance until the $40 level.

I’ll be waiting for a break above $30 and a buy signal in Trigger Trade Pro before entering any trading positions.

SIL has also traded below its 50MA since late August, and is now just below the critical $45 level. 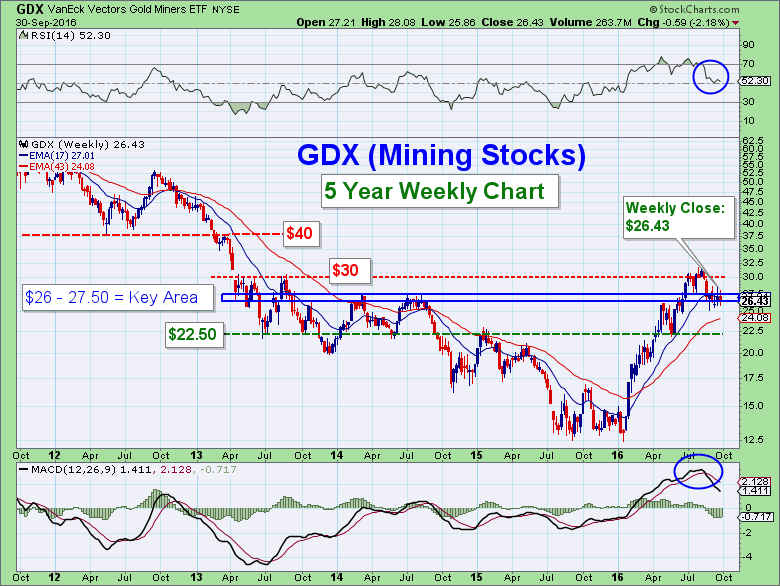 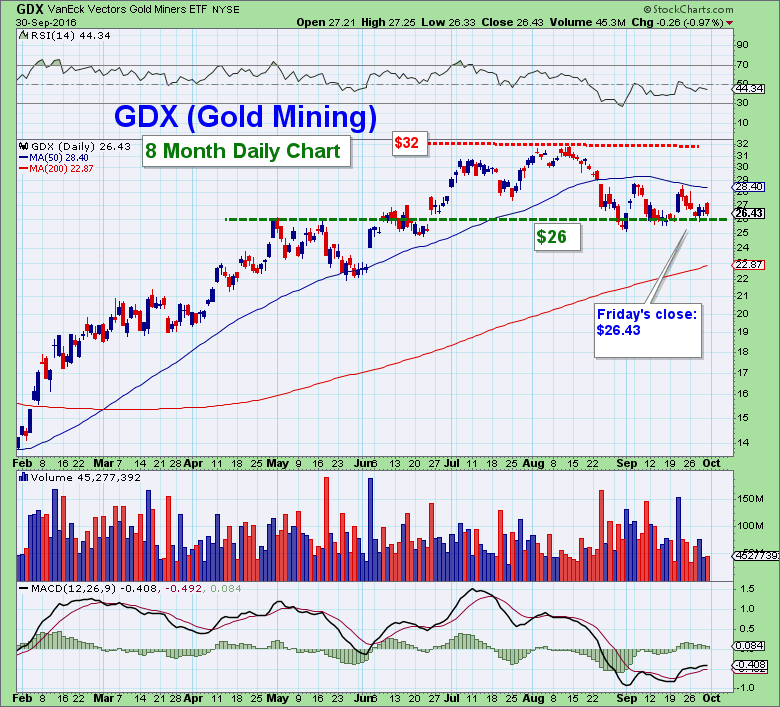 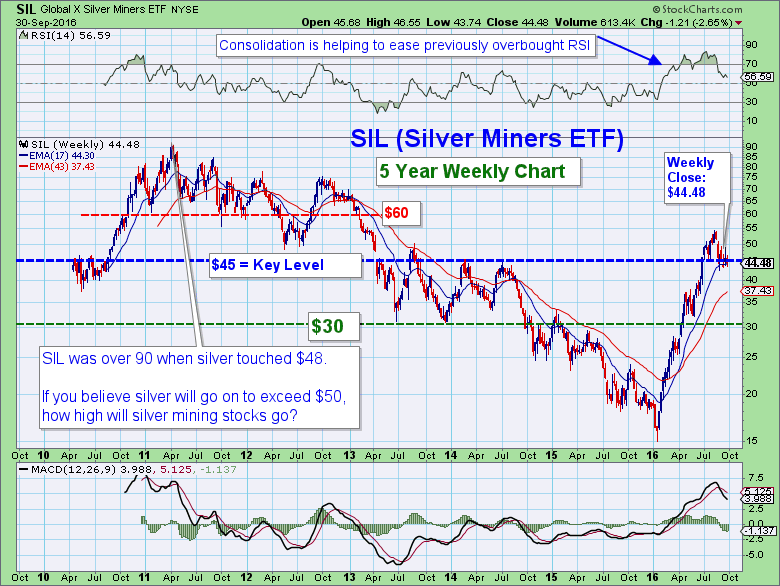 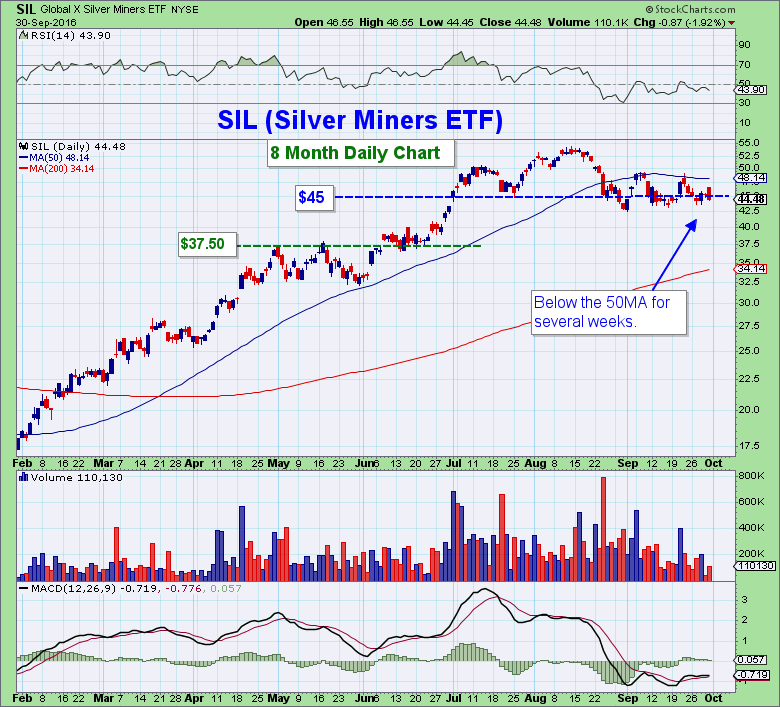 The dollars continues to consolidate near the $95 level with a slight downward bias, trading below both the 50 and 200MAs.

The dollar appears to be digesting the ever-conflicting signals emanating from the Federal Reserve.  For what its worth, 61.6% of market participants are expecting the Fed to raise rates at its December 14th meeting (after the election.)  A lot can change between now and then, but it’s noteworthy that the last time they raised rates in December 2015, it marked the precise bottom for the metals and the inception of a renewed bull-market. It is not a foregone conclusion that a rate hike would equate to a sharp selloff in the metals and spike in the dollar. 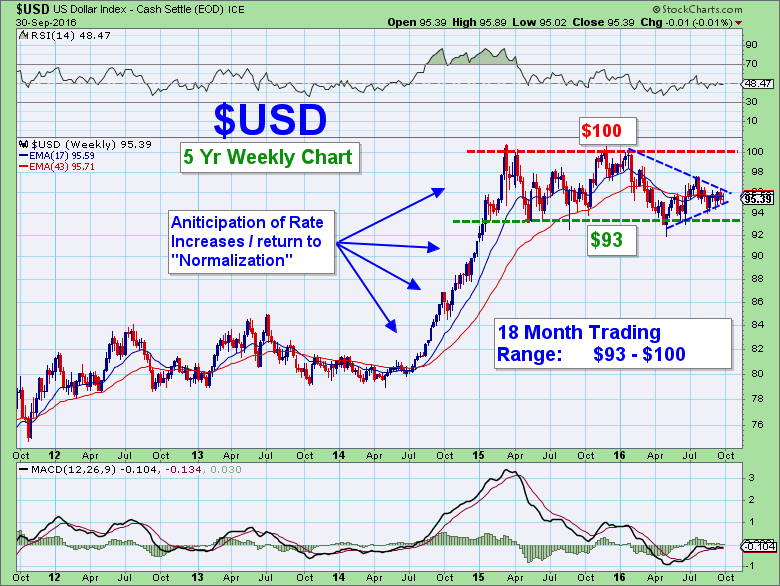 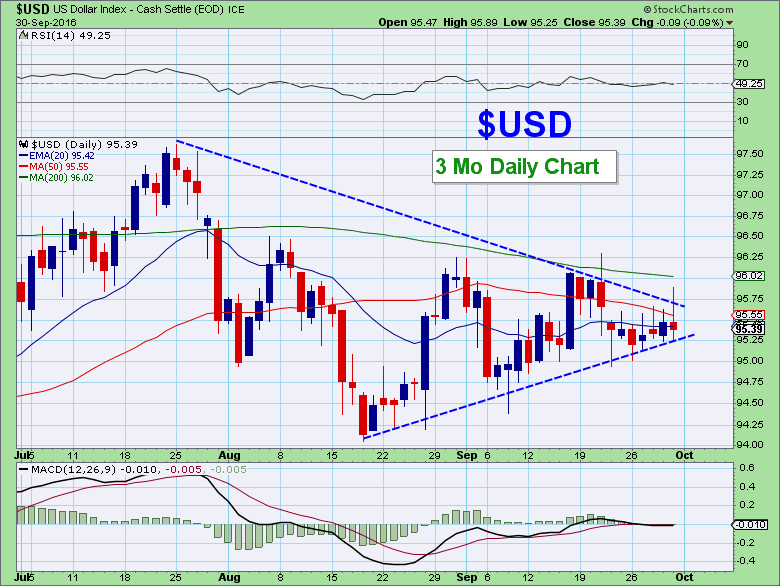 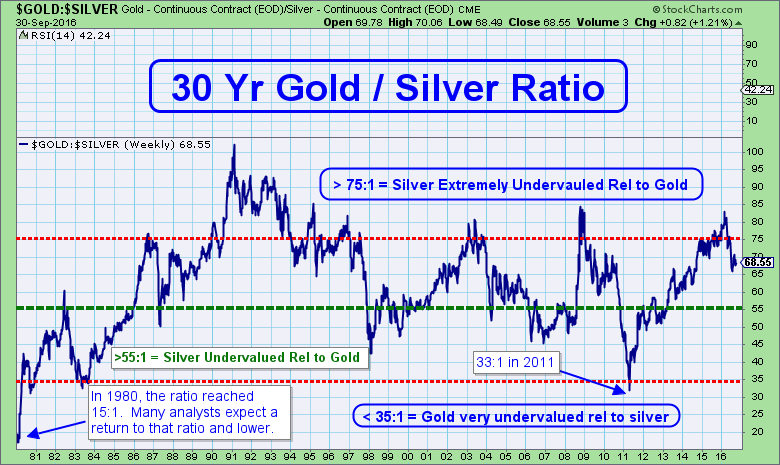 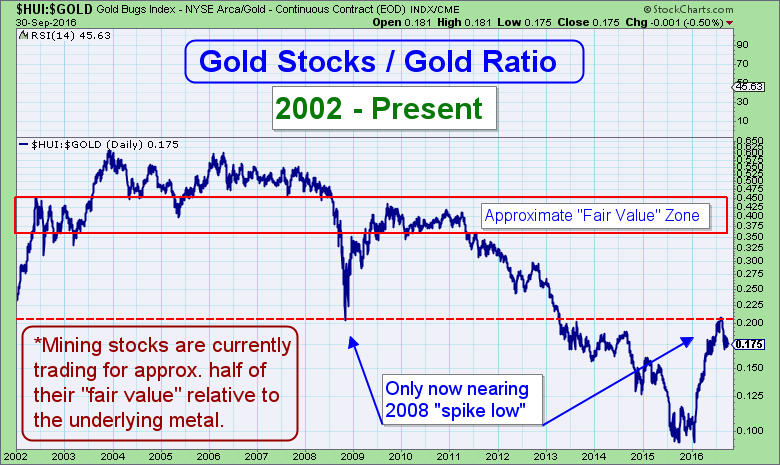 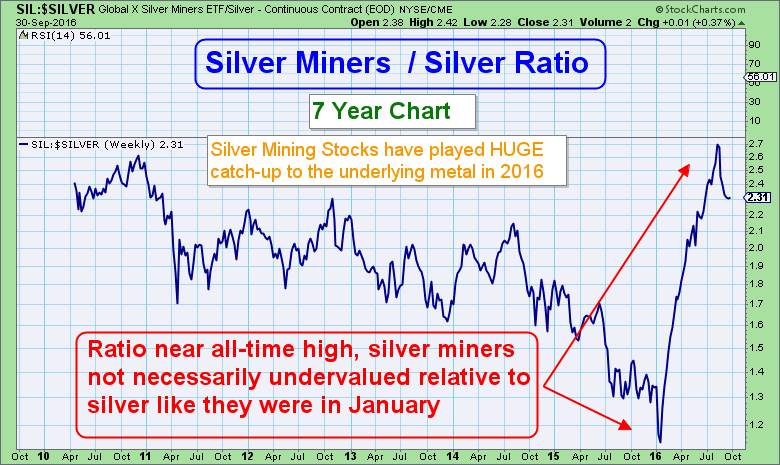 Treasuries are in a massive bull-market (bubble) that may end in a blow-off top.  How long interest rates can be maintained at these artificially low levels remains to be seen, but when rates rise, it will spell disaster for an economy addicted to exponentially growing debt.

Recently, gold has traded in lock-step with Treasuries. 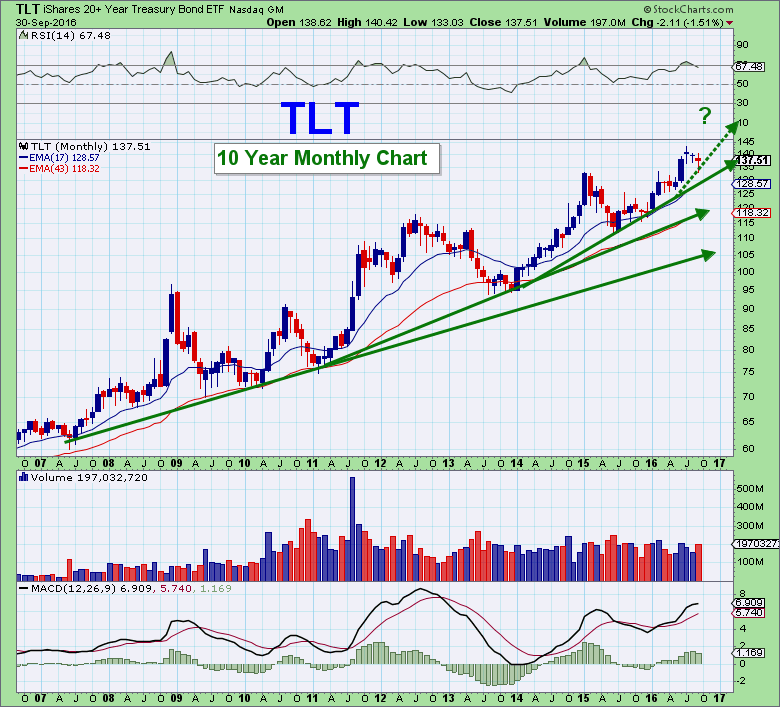 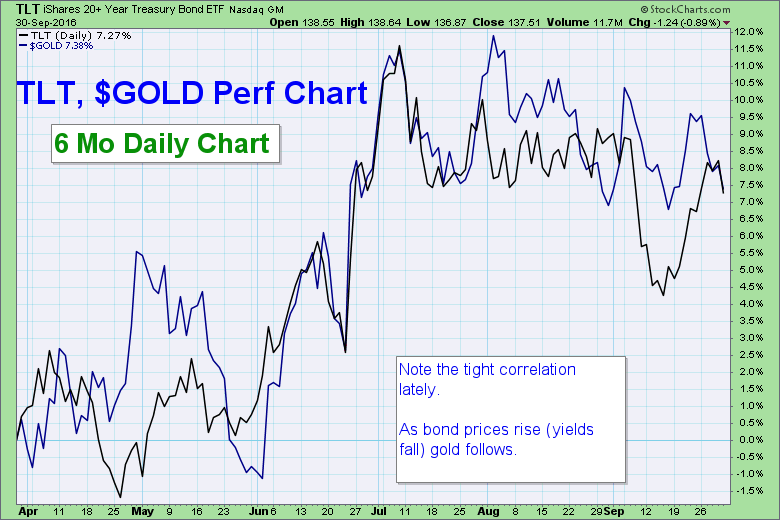 Copper has rallied nicely, but until $2.30 is cleared, I will remain skeptical of copper’s ability to maintain a sustained uptrend. 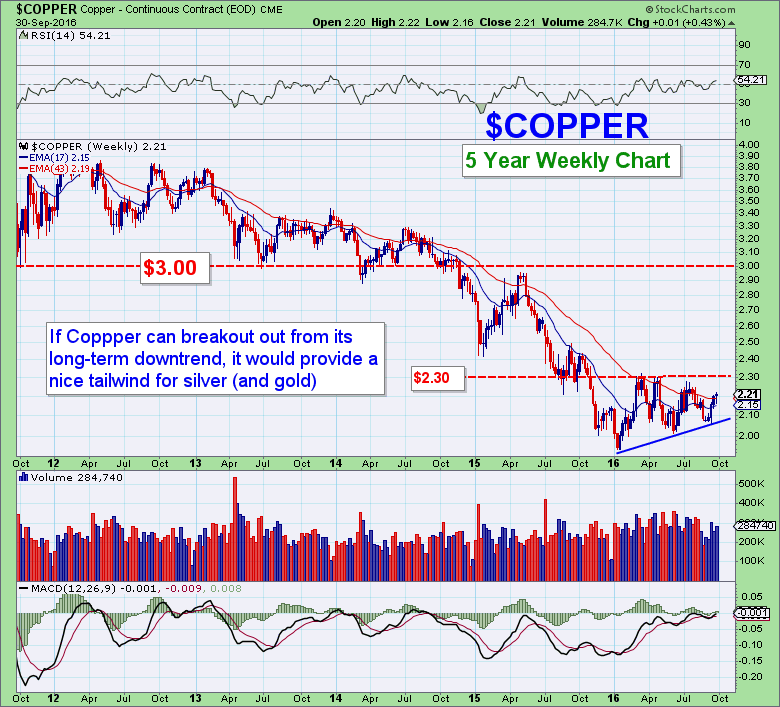 As mentioned in the opening paragraphs, oil rallied sharply this week after OPEC ministers came to a tentative agreement on production cuts beginning in November.

Last week’s charts showed oil approaching the apex of a closing wedge pattern and it was suggested that the OPEC meeting would likely provide the catalyst for a quick move, one way or the other.

The short-term trend is now up, but stubborn overhead resistance looms just ahead at $50.

On the downside, there is solid support at $43. 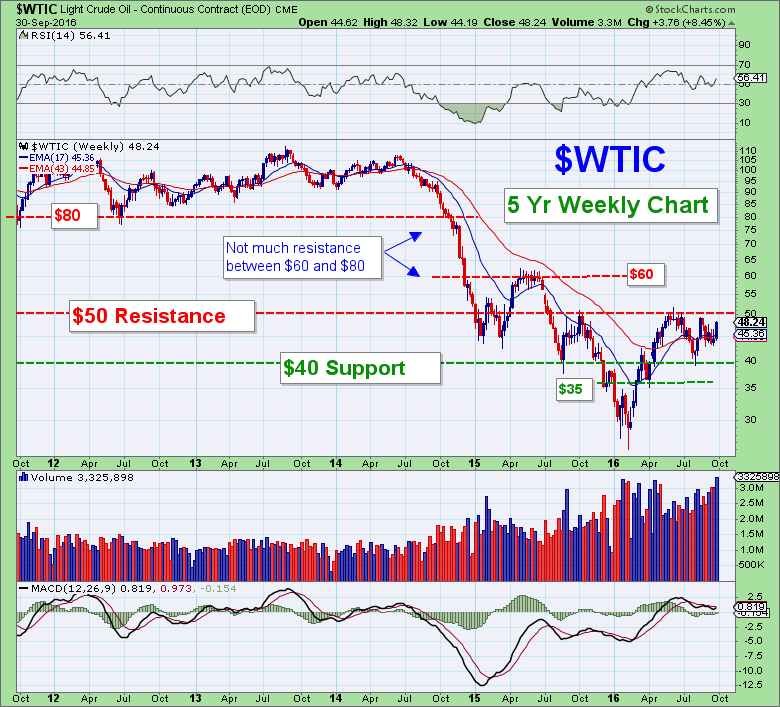 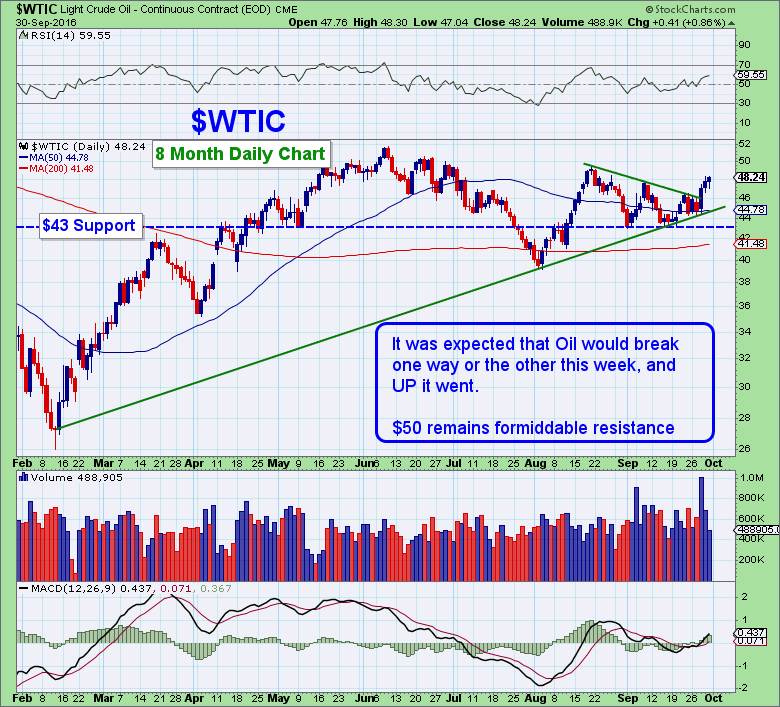 The solar ETF, TAN, once again bounced off of the $19 support level.

A Clinton victory in the upcoming election could potentially provide the catalyst needed for TAN to reverse its brutal 18-month downtrend.  Clinton has spoken of government spending $500 million on solar panels, although details of the plan are scarce.

Conversely, a Trump victory would likely bode poorly for solar.

We’ll be monitoring price and volume, especially as this chaotic election season progresses.  FTM subscribers will be alerted if, and when, an uptrend is formed in solar. 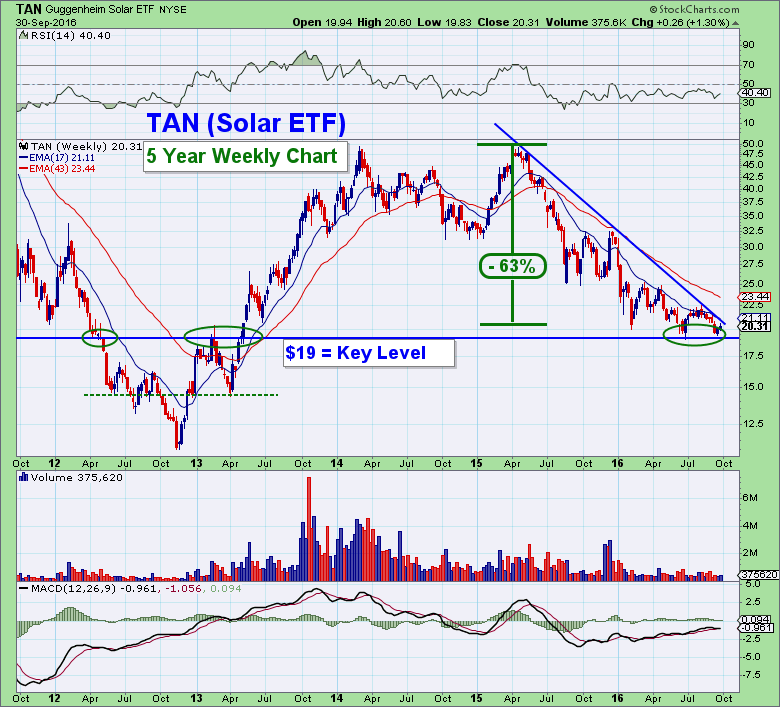 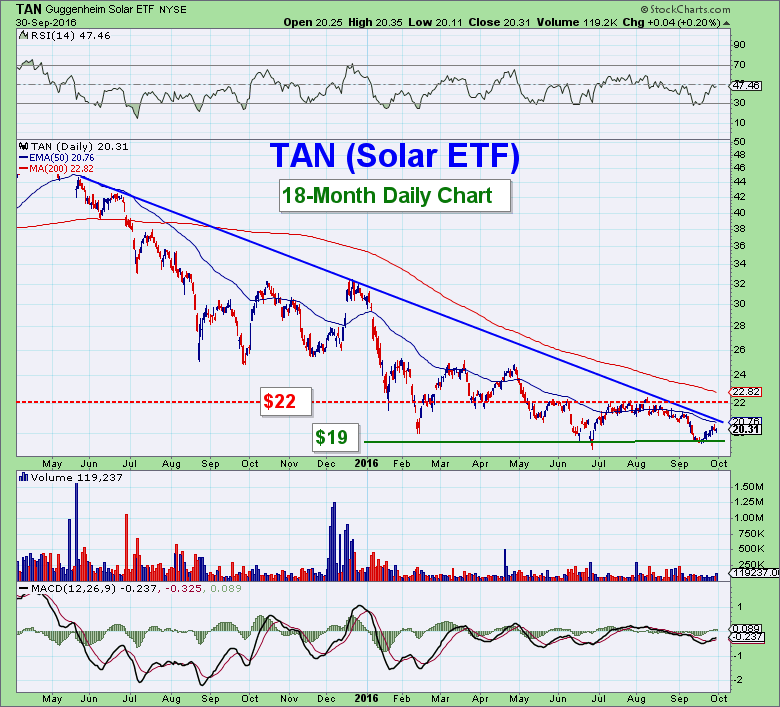 Going forward, these reports will be published the first week of each month in a downloadable pdf format.  Shorter weekly updates will continue to be released for FTM members, focusing on shorter-term charts, trends, and occasional trade setups.

Meanwhile, let’s monitor the Deutsche Bank situation, the German response, and possible spillover effects into other markets, especially the metals. How the Deutsche Bank “can-kicking operation” unfolds will likely set the precedent for the slew of other European bank failures that are undoubtedly forthcoming.

I hope everyone has a great month!

“Happy is the man who finds wisdom,
And the man who gains understanding;
For her proceeds are better than the profits of silver,
And her gain than fine gold.” (Prov 3:13-14)

PODCAST: Welcome to the COVID-19 Economy