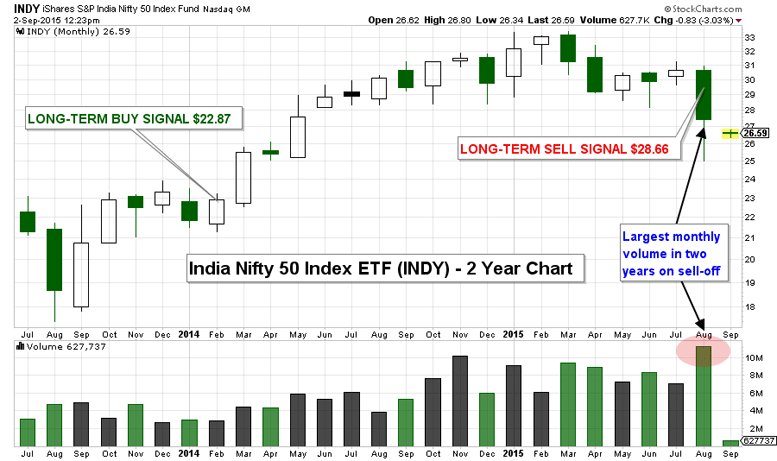 We just released our September ETF ratings for our FTM Insiders and Pro Traders, and one of the major changes from last month is in India’s stock market, which is now flashing a new long-term sell signal in our Profit Trakker system.

The sell signal on India’s stock market is only one of ten new country-based long-term sell signals issued by our system. See all ten of the countries in sell mode here.

Our trading vehicle of choice for Indian stocks is the iShares India 50 ETF (Ticker: INDY). Since our trading system’s last long-term BUY signal in February 2014, INDY has risen 25.3%. However, with the steam running out of this bull run, our system is now flashing a long-term sell signal on Indian stocks.

Recent economic data show that India’s second quarter GDP was weaker than expected, which falls in line with many emerging nations struggling with economic growth. India also has some worries over the devaluation of the Chinese yuan, but not as much as some of its neighbors who trade at higher levels with China.

Adding to India’s woes is the most recent session of its parliament, which failed to produce many of the financial and economic reforms promised in the campaign of Prime Minister Narendra Modi.

For now, we will avoid Indian stocks and will remain bearish until our system flashes a new long-term BUY signal for our subscribers.

P.S. To unlock our latest ratings on 40 country-specific ETFs, including buy, hold, and sell signals, subscribe to our Gold member community now.