Investing in Farmland: 4 Ways to Play the Agricultural Boom

For at least the last decade, economically savvy investors have been investing in hard assets as an inflation hedge against future and present economic uncertainty. While much of this demand for these hard assets has poured into precious metals and energy, other investors have been buying farmland as an investment hedge against future inflation in food prices. And this trend is not isolated to America. Global investors are scooping up deals on farmland in Russia, Brazil, and many African countries.

Investors are often drawn to farmland based upon its cash flow potential (rents or crop yields) in addition to its capital appreciation. Additionally, many investors who are seeking less exposure to paper assets often find that farmland offers the type of diversification that they desire.

Buying Farmland as an Investment

For years, U.S. farmland could be purchased at phenomenally low prices. However, as more investors lined up to buy, supplies of good arable farmland began declining, causing nationwide prices to double just over the past five years.

For the millions of Americans who have followed the corporate-controlled mainstream media’s financial advice to “buy a house and max out your 401(k)”, investing in farmland probably sounds exotic, and even perhaps risky.

One of the best assets to own during times of crisis, and especially during a period of growing inflation, is farmland.

The Returns on Farmland Investing

According to the National Council of Real Estate Investment Fiduciaries, U.S. farmland generated a total return of 15.1% in 2011. In contrast, the S&P 500 Index ended the year flat.

The USDA provided a state-by-state breakdown on farmland real estate values. See below. 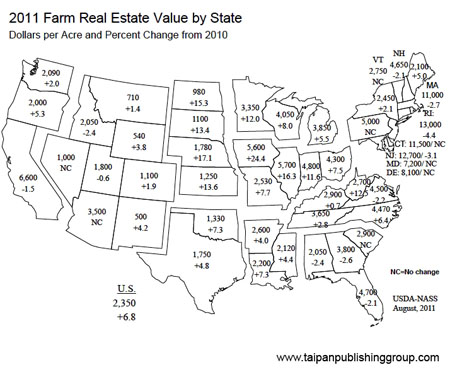 And this is not a new trend.

For the last 10 years, farmland has consistently outperformed U.S. stocks.

The U.S. Department of Agriculture has predicted that 2012 will be the third-highest year for farm income on record since 1980. Meanwhile, U.S. farmland values are forecast to increase almost 6 percent in 2012.

A well run farm typically provides an investor with a minimum annual return of 6%-7%. And the investment returns are only expected to increase as the global population continues to explode and a growing number of people from emerging nations join the ranks of the middle class. On average, people living in emerging nations consume about 70 pounds of meat per year. While that is much lower than the 176 pounds of meat consumed annually by the average person living in the developed world, the global middle class is rising and the trend towards increasing food prices is firmly established.

Physical farmland is not for everyone

Just because farmland can be a solid investment with great future potential does not make it a great investment for everyone. Investing in physical farmland requires time and a large amount of financial capital to get started. And the risks are numerous including: unpredictable weather patterns (consider our current drought), potentially large upfront costs, a lack of liquidity, and the fact that it can be a downright complicated process for the uninitiated.

Nearly half of the farmland in the Midwest is owned strictly by investors who employ others to do the “dirty” work. Of course, this hands-off approach eats into profits and can increase your risk significantly.

If you truly desire to buy a piece of physical farmland, the best way to start is to investigate your options. The U.S. Corn Belt, composed of states like Iowa, Illinois, Indiana, and Michigan, have some of the most fertile, and therefore desirable, farmland anywhere in the United States. Once you settle on an area that you want to invest in, begin working with a local rural real estate agent who specializes in working with farmland investors. A quick Google search for “investing in farmland” pulled up this website which appears to connect buyers and sellers.

As you go shopping for land, you may be surprised by the prices. U.S. farmland values have appreciated by more than 1,200% since 2000, making it one of the top three best performing asset classes over the last decade. Today, the average price for U.S. farmland is over $2,000 per acre. But expect to pay upwards of $6,000 or more for the more desirable farmland.

However, if you would prefer to gain access to farmland through the financial markets, there are a few options.

Cresud Sociedad (Ticker: CRESY) – One of the easiest ways to invest in global farmland is to buy shares of Cresud Sociedad (Ticker: CRESY). CRESY is based in Buenos Aires, Argentina and owns and operates 26 farms covering over 1.25 million acres scattered across Latin America. As you can see from the chart below, the stock began a strong down trend in March of this year and appears to be in a period of consolidation.

CRESY has strong technical support at around the $7.00 level ($6.95 to be exact). I currently own this stock and plan to add more if the stock can find support at $7.00 and begin another upward move.

Adecoagro S A (Ticker: AGRO) – This is another interesting play on farmland. AGRO is a Luxembourg-based company that owns around 500,000 acres of South American farmland, consisting of 23 farms in Argentina, 13 farms in Brazil, and one in Uruguay. Below, you can see AGRO began attempting to breakout of a two month long consolidation period last month.

A look at the portfolio of billionaire investor, George Soros, shows that he has been aggressively buying shares of AGRO, adding more last quarter. AGRO would be worth buying on a pullback in my opinion.

Cosan Ltd. (Ticker: CZZ) – Cosan Ltd. focuses on farmland development and management globally. They own over $4 billion in farmland and have nearly $1 billion in cash on hand. In addition, CZZ is the world’s largest grower and processor of sugarcane and ethanol. Growing investor interest has driven up the price of the stock since June.

Because this stock has risen so quickly, I would only be interested in buying it on a pullback. One key technical area to watch is $12.80, where it currently has strong support.

Market Vectors Global Agribusiness ETF (Ticker: MOO) – Another way to profit from the increase in farmland values and commodity prices is to invest in the companies that make the boom possible. This sector is known as agribusiness.

MOO has long been one of my favorite ways to gain access to the booming agribusiness sector. This ETF holds ownership in a large number of the top global agribusiness companies like John Deere & Co., Mosaic, Archer Daniels Midland, Potash, and CF Industries, among others.

Disclosure/Disclaimer: FTMDaily.com owns shares in CRESY and MOO. Investing is risky. Always speak with a trusted financial professional before making any financial decisions. And always do your own due diligence.

Jerry Robinson is the founder of FTMDaily.com and is the author of “Bankruptcy of Our Nation: 21 Income Streams, P.A.C.E. Investing, and More.” Robinson is an Austrian economist, a serial entrepreneur, and an investor. You can get more of Jerry Robinson’s investment insights and income ideas by subscribing to our Gold member community. Learn more here.