The Impending Financial Crisis That Will Rock the Petrodollar

ANALYSIS: The Impending Financial Crisis That Will Rock the Petrodollar

My research on the petrodollar system began just after the events of September 11, 2001, as I, like most Americans, sought answers to America’s complicated relationship with Middle Eastern nations. What I discovered shocked me greatly and I decided to share my knowledge through this website and my best-selling book, Bankruptcy of our Nation.

Since posting my research about the petrodollar system in a four-part article series on this website, the articles have been read and downloaded millions of times, and my research on this topic has literally taken me around the world as various institutions — especially universities — have invited me to lecture on this complex topic. Even some of the world’s top financial thinkers and investment gurus have contacted me directly over the years asking for my help to better understand this bizarre system which literally undergirds our entire economic infrastructure. I invite you download and read the article series for free here.

Those of you who have read our four-part article series on the insidious origins and evolution of America’s petrodollar system know the importance of watching Saudi Arabia and its sister Gulf states. After all, the future of the petrodollar system — and thus the U.S. dollar’s pre-eminent global reserve status — hinges upon the continued pro-Western sentiments of the oil-rich Gulf countries, particularly Saudi Arabia.

With that in mind consider an alarming report released this week that, thanks to a growing budget deficit aggravated by stubbornly low oil prices and a costly war of aggression in Yemen, Saudi Arabia has been withdrawing tens of billions of dollars worth of foreign reserves from global equity markets.

According to a report from the Financial Times, and data available from Saudi Arabia’s central bank (the Saudi Arabian Monetary Agency, or SAMA), more than $70 billion of foreign reserves have been moved from global asset managers since last year in order to finance the kingdom’s growing budget deficit.

According to the FT:

“This month, several managers were hit by a new wave of redemptions, which came on top of an initial round of withdrawals this year, people aware of the matter said.

“It was our Black Monday,” said one fund manager, referring to the large number of assets withdrawn by Saudi Arabia last week.

Institutions benefited from years of rising assets under management from oil-rich Gulf states, but are now feeling the pinch after oil prices collapsed last year.

The Saudi government’s revenues have been in a steady decline since 2013. The country’s negative credit ratings from S&P and Fitch, coupled with its ongoing attempt to defend the riyal’s dollar peg, are not making matters any better. Despite declining oil revenues, the regime refuses to slash its lavish spending on the Royal Family, public works, and its ongoing war of aggression against neighboring Yemen.

PODCAST: The Coming Fall of the House of Saud (and the Petrodollar)

The Saudis are reportedly sitting on hundreds of billions of petrodollars. However, the cash drain on the country is apparently hitting harder than some realize.

According to U.S. estimates, OPEC members (minus Iran) are expected to earn $380 billion in oil revenues in 2015, down from $730 billion in 2014. That represents the largest one-year decline of OPEC revenues in history!

Again, according to FT:

“Reality is hitting home, and necessity is also hitting home,” said John Sfakianakis, director for the Gulf region at Ashmore, a fund manager.

Saudi Arabia needs an oil price of $105 a barrel to meet planned spending requirements, but the average price for the year is estimated at $58 a barrel, he said. “If the government continues business as usual and draws down like this it will deplete reserves faster than expected, by the end of 2018 or early 2019,” added Mr Sfakianakis.Financial Times

Put simply, Saudi Arabia is a banana republic on the edge of financial disaster… and the entire world seems to be ignoring it.

Saudi Arabia’s ascent to economic might came as a result of its vast oil supplies and its cozy relationship with Washington. But the regime’s reckless overspending and oppressive leadership style is a recipe for disaster. The country’s plight is made worse by its explosive population growth and a national labor pool that lacks relevant job skills in order to compete in a changing global economy.

Today, oil revenues compose approximately 93% of Saudi Arabia’s annual income. Saudi citizens pay no tax on their income, interest or stock dividends and the kingdom heavily subsidizes gasoline for the public to the tune of 45 cents per gallon. But government handouts really began to explode in the wake of the Arab Spring as the corrupt regime attempted to pacify its citizens and prevent legitimate protests and uprisings.

When the kingdom’s coffers eventually run dry, it will be a powder keg.

It has long been rumored (and later reported by Wikileaks) that Saudi oil reserves are overstated by as much as 40%, and its recent financial moves give the appearance of a country that is running dangerously low on cash.

If it turns out that the emperor has no clothes, things could get ugly in a hurry. The citizenry, most of whom are economically dependent upon the regime, should demand an examination of the national accounts. (If most Saudi citizens examined the latest Wikileaks Saudi Cables release, which detailed the opulent Saudi royal welfare program, it would be enough to cause an overthrow of the present regime.) But Riyadh’s tight-fisted leadership style makes financial transparency virtually impossible.

It is noteworthy, however, that there is a growing amount of palace intrigue presently rocking the Saudi royal family. A senior Saudi prince, one of the grandsons of the state’s founder, Abdulaziz Ibn Saud, is now publicly calling for regime change in Riyadh. The prince has penned two letters calling for the overthrow of the current King Salman, who came to power earlier this year. You can read more about that here.

With tensions growing in the palace halls, anger rising among the Saudi population, and a growing deficit to boot with no relief in sight, trouble appears to be brewing for the Saudi kingdom.

Whether the Saudi government is in deeper financial trouble than it is letting on is mere speculation. However, as the country that virtually serves as the backbone for the petrodollar system, it is an important question.

It all reminds me of an old Saudi proverb (my paraphrase): “My father rode a camel. I drive a car. My son flies a jet airplane. His son will ride a camel.”

I believe we could witness the collapse of Saudi Arabia as we know it in the coming months and years. And when we do, the entire Middle East will be shaken, as will the petrodollar system.

Why? Because the petrodollar system’s two biggest players are the U.S. and Saudi Arabia. Stability in Saudi Arabia is key to maintaining this relationship. If Saudi Arabia’s economy spins out of control, it could make the 2011 Arab Spring look like a “warm-up.” Such an uprising in Saudi Arabia, where the angst and suppression run deep, could cause a violent coup against the Royal Family. The worst case scenario for America’s economy would be if an economic crisis in Saudi Arabia led to the rise of an anti-Western regime in place of the present Western puppet regime. This could provide China and/or Russia with a once-in-a-lifetime opportunity to replace the U.S. in the Gulf, and could be the final nail in the coffin of global dollar demand.

Fortunately, these are mere speculations and observations at present. But things could deteriorate quickly if the world soon finds out that the Saudi emperor really has no clothes.

VIDEO: Learn 14 ETFs That Will Soar During The Next Stock Market Crash 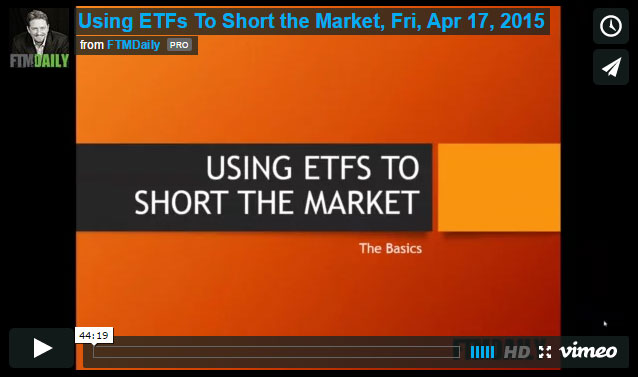 Become a Student of the Market and Learn to Profit!
Subscribe now and unlock all of our best trading ideas in real-time! Plus, get instant access to hundreds of hours of video trading education!