The Global Money Printing Campaign is Working its Magic

The headlines pumped out of the mainstream press this week were some of the most economically positive that I have seen recently.

It seems the global embrace of quantitative easing is finally beginning to work its magic. But central banks do not appear willing (more likely able) to turn off the printing presses.

After a recent meeting, the European Central Bank has opted to leave its aggressive monetary policy unchanged. The base lending rate in Europe remains 0.75%.

The Bank of England chose to leave interest rates – currently 0.5% – unchanged. It is also becoming more likely that the BOE will begin a new round of asset purchases.

This week, the Bank of Japan chose to leave its 0% interest rates unchanged. (The BOJ will likely become even more aggressive when Haruhiko Kuroda becomes the bank’s governor later this year. Kuroda’s first official policy meeting will be on April 3-4. I’ll be watching this meeting closely.)

Of course, the Federal Reserve continues to suppress interest rates in the United States, holding them near zero.

The reality of a coming U.S. hyperinflation remains fixed. While hyperinflation is obviously not here yet, the signs that historically precede it are abundant.

In our globalized economy, a central bank’s monetary policy choices impact the economies of other countries around the world. This relation is typically discovered in currency values and international trade. When a country, like Japan for example, lowers its interest rates and adopts an aggressive easing policy, the value of its currency falls against other competing currencies. In this example, Japan’s falling currency will give it a competitive edge in international trade. In order to compete, other countries can adopt aggressive monetary policies in an effort to remain competitive in global trade.

Historically speaking, this is how currency wars begin…

Today, Europe and Japan appear to be in a race to debase their currencies. The ultimate prize is a competitive advantage in global trade. After all, higher exports add to the bottom line of a nation’s overall GDP.

The Fed should be happy to see that its stated goal of creating the “wealth effect” is beginning to be realized.

Back in the Fall of 2010, Fed Chairman Ben Bernanke penned a piece in the Washington Post where he defended the Fed’s aggressive monetary policy. He wrote:

“Higher stock prices will boost consumer wealth and help increase confidence, which can also spur spending… Increased spending will lead to higher incomes and profits that, in a virtuous circle, will further support economic expansion.”

Put simply, the logic of the “wealth effect” goes something like this:

The Fed provides extremely aggressive monetary policy >> Low interest rates and cheap money cause investors to speculate in the financial markets >> The financial speculation leads to a rise in stock prices >> U.S. investors see their IRA’s and 401k balance rising and become more “confident” in the economic future >> This economic confidence translates into more spending which means higher consumption and higher corporate profits >> The economy expands and the Fed can stop its intervention.

And while the Fed’s “wealth effect” is working, it has only served to distort the financial markets through wrong incentives and moral hazard. Today, corporations are sitting on enormous piles of cash and are not hiring like they were in the pre-crisis era. U.S. real estate is still plagued with underwater mortgages and record defaults and foreclosures. And America’s unemployment remains stubbornly high, despite the government’s best attempts at painting a different picture with their bogus “official” numbers.

What does all of this mean to you?

It means that the stock rally that we are experiencing likely has much more room to continue. Trillions of investment dollars are still sitting on the sidelines in bonds and cash. Americans have short memories. If the stock market continues climbing, money will come pouring into stocks. This will drive prices up even quicker. This will set the stage for the next mega-collapse.

I have no predictions on dates when this will occur. However, it is certain due to the vicious cycle created by the Federal Reserve’s inflationary policies coupled with typical investor behavior.

Given this current environment, I expect precious metals, agriculture, commodities, and energy to outperform in 2013.

In a note to clients, Goldman Sachs stated that it expected commodities to outperform over the next three months. The investment bank appeared particularly bullish on the price of copper in the near-term given China’s continued demand. I agree and believe that copper prices could gain 12-15% or so over the next 4-5 months. The industrial metal is down 10% in February despite some positive economic data around the globe. When I want exposure to copper, I use an ETF (Ticker: JJC). 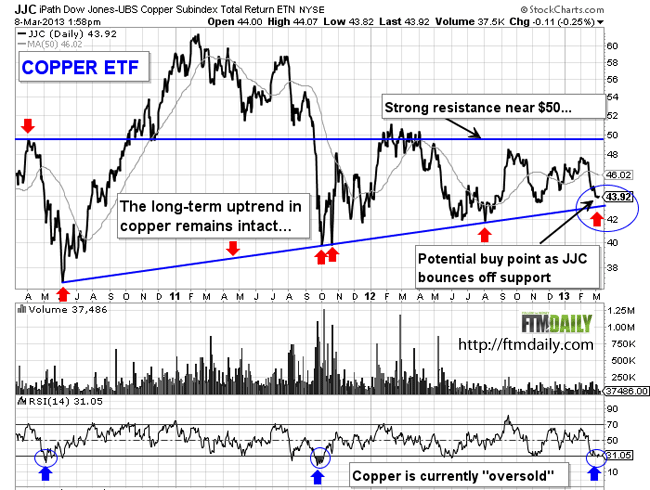 Another way to gain exposure to copper is through Freeport McMoran Copper and Gold (Ticker: FCX). If this stock pulls back to about $30 per share, I think it could present a very good buying opportunity for those who are bullish on commodities over the long-term. See the chart of FCX here. You will notice how much it resembles the above chart of the copper ETF, JJC.