GALLUP POLL: Government “is” the Problem

(GALLUP) – A record-high 81% of Americans are dissatisfied with the way the country is being governed, adding to negativity that has been building over the past 10 years. 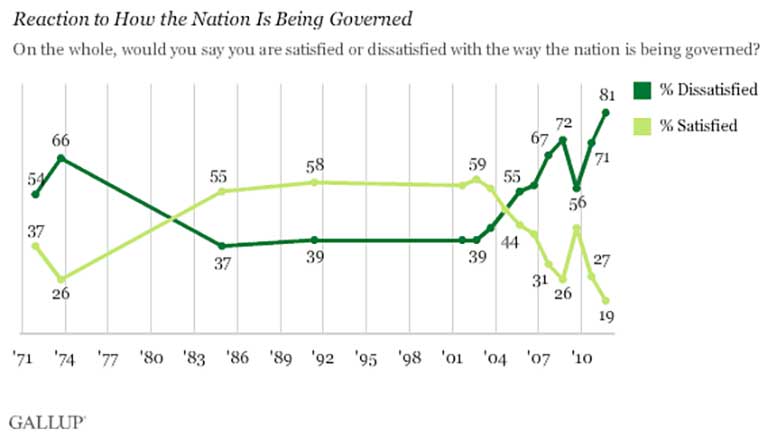 Majorities of Democrats (65%) and Republicans (92%) are dissatisfied with the nation’s governance. This perhaps reflects the shared political power arrangement in the nation’s capital, with Democrats controlling the White House and U.S. Senate, and Republicans controlling the House of Representatives. Partisans on both sides can thus find fault with government without necessarily blaming their own party.

– 82% of Americans disapprove of the way Congress is handling its job.

– 69% say they have little or no confidence in the legislative branch of government, an all-time high and up from 63% in 2010.

– 53% have little or no confidence in the men and women who seek or hold elected office.

Americans believe, on average, that the federal government wastes 51 cents of every tax dollar, similar to a year ago, but up significantly from 46 cents a decade ago and from an average 43 cents three decades ago.

– 49% of Americans believe the federal government has become so large and powerful that it poses an immediate threat to the rights and freedoms of ordinary citizens. In 2003, less than a third (30%) believed this.