The Year of Black Gold…

2011 is turning out to be a boom year for OPEC. If oil can stay consistently above $100 until December, the cartel is projected to reap $1 trillion in oil revenues by year’s end. This would be OPEC’s most profitable year on record. In 2008, OPEC fell short of the $1 trillion mark, reaching $990 billion in revenues.

Analysts expect Russia to also have a record year in oil revenues – somewhere between $100 billion and $350 billion –  if oil prices can manage to stay above $100.

And now… A new report from the Interior Department, obtained by the AP and set to be released today, says that more than two-thirds of offshore oil and gas leases in the Gulf of Mexico are currently sitting idle. According to experts, these inactive leases potentially hold more than 11 billion barrels of oil and 50 trillion cubic feet of natural gas. In addition, the report indicates that 45 percent of all onshore oil and gas leases are inactive.

According to the White House, President Barack Obama will be outlining his new plans for America’s energy policy on Wednesday. He will put forward an overall goal of reducing oil imports by one third over the next decade and relying upon more on cleaner forms of energy. It’s the same old story that we have been hearing for years. Here’s more of what to expect from the President’s speech.

The cash-strapped New York subway system wants to put the Big Apple’s jobless to work. But in an interesting way. By taking the city’s welfare recipients – those who are unemployed and receiving an unemployment check from the state – and putting them to work cleaning up the subway. Known as the “Work Experience Program,” the concept requires those who receive money from the state to work for their benefits.

In this brilliant idea, everyone wins. New York’s Transportation Authority receives low-cost cleaning help. The unemployed receive more job training. And the most promising of the workers who participate in the program may even be able to move on to full-time employment.

And now… In Illinois, it appears that common sense may finally be prevailing. A state lawmaker, Rep. Jim Sacia (R-Pecatonica), has proposed drug testing for the state’s welfare recipients. How is this not already a requirement? Based on the past, it is doubtful that such an obviously good idea will become law. Nevertheless, expect the national dialogue on handouts of taxpayer money to become more pervasive in the coming months and years.

Should government hand-outs have strings attached? Absolutely! How else can you measure their effectiveness and hold the recipient accountable?

Currently, the government imposes few incentives for individuals to not receive public assistance. Today, for example, there are 44 million U.S. citizens receiving food stamps. Why not educate all of the able-bodied individuals in this program with basic farming skills? Then, limit the amount of time that any able-bodied individual can receive food stamps to a maximum of twelve months. Are you physically able, and still hungry? Plant a crop.

Think it’s too expensive to train an individual how to plant a vegetable seed? Compare the cost of teaching basic farming skills to a practical giveaway of a lifetime supply of Cheetos and donuts, and suddenly the economics make sense.

Accountability on government handouts… is it just a dream?

1. TICK-TOCK: Congress has 10 days to get serious and create a deal that would fund the government through the end of the fiscal year in September. If not, a government shutdown will occur on April 8.

2. MARCH LABOR NUMBERS: Private employers added 201,000 jobs in March, according to ADP Employer Services. No surprises as the numbers were in line with analyst’s expectations.

3. WHAT CORPORATE TAX?: GE employs 287,000 employees and has $150 billion in annual revenue. But last year, they paid less in U.S. income taxes than you did.

5. JIM ROGERS UPDATE: Billionaire investor Jim Rogers is one of our favorite commentators here at FTMDaily. After successfully calling the commodities boom nearly a decade ago, he is now forecasting that oil and natural gas will continue to go much higher over the next 10 years. He is also buying the Chinese yuan. He likes Chinese stocks only on major dips. He also admits to buying gold and silver last week. Read the entire article with video HERE.

Last week, a Chinese TV station reported that public gold demand in that country was ‘through the roof.’ In fact, the public investment demand in China is so high that it is causing a shortage of supplies for the country’s businesses who need gold for industrial purposes, such as fabrication.

Its time to laugh a little. Here’s a sampling from the some of the late-night jokers.

“President Obama gave a nationally televised speech about Libya. The speech was titled, “No, I wasn’t born there.”” –Conan O’Brien

“About Libya, President Obama says we’re staying for a short time and then leaving. That’s what my relatives always say.” –David Letterman

“Apparently, companies have been accepting job applications on Twitter. If you can fit your resume into 140 characters, you didn’t get the job.” –Jimmy Fallon

“Porsche is introducing their first hybrid car. It costs over 800,000 dollars. It’s the most expensive way to save gas ever.” –Jay Leno 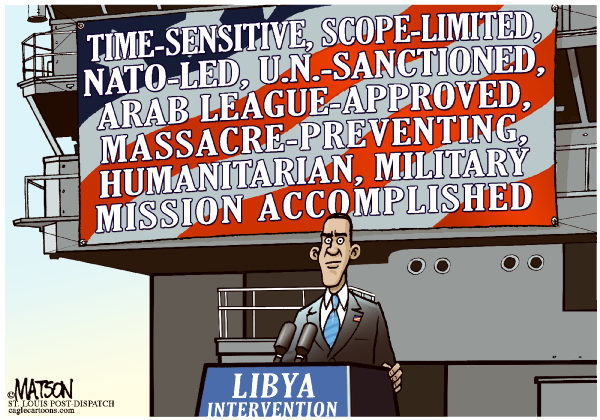