FTMDaily News Update – The Slow Death of the Dollar

The Slow Death of the Dollar… In section C of yesterday’s Wall Street Journal, the paper spent several pages on the topic of global currencies. There were several good articles but it was the opener that is making its rounds on the web today. The piece is called, Why The Dollar’s Reign is Near an End by Barry Eichengreen. (Eichengreen is the author of a new book entitled, Exorbitant Privilege which is on my reading list… After I read it I’ll share any keen or original thoughts.) In his WSJ article, Mr. Eichengreen gives three reasons why he believes that the U.S. Dollar is in a long term downward trend.

1) Changes in technology are undermining the U.S. Dollar monopoly on global trade.

2) The dollar is not the only game in town anymore. He specifically points to the Yuan and the Euro as rising competitors. (Yes, the Euro.)

3) The waning perception around the globe of the Dollar as the ultimate safe haven. (Again, this points back to the competition factor.)

I agree with Mr. Eichengreen’s assessment. I have been saying since 2007 that the Dollar will be replaced as the world’s key reserve currency by 2020. Some have suggested that the Dollar will collapse virtually overnight. I disagree, as does Mr. Eichengreen. While there are some events that could drastically impact the dollar, like a shift in the petrodollar system (see our recent video on this topic here) or a massive sell-0ff of government bonds, the Fed has shown that it stands ready to pump more money at a hint of the slightest problem. The primary reason is that there is no currency that can currently replace the Dollar… yet. China has been aggressively seeking to internationalize its currency. And Europe is quickly laying the groundwork for a government bond market that will compete with the U.S. So rest assured, the dollar’s reign as the world’s primary currency will end. Because we believe this so strongly, we have created an entire organization to give you ideas on how to weather the times ahead. (By the way, you can read Mr. Eichengreen’s piece here. Regardless of your view, it is definitely worth a read.)

Last week’s jobless numbers were reported this morning. Claims for unemployment benefits fell to 368,000 – their lowest level in more than 2-1/2 years. This is the second straight week that claims have held below 400,000, causing some to wonder if the labor market is finally entering a recovery. Another positive note is that layoffs seem to be leveling off. But aside from this, there is still little to be excited about. Job growth is extremely weak in most areas, and even nonexistent in others. And there are still too many job-hunters and not enough jobs. (Currently, 4.7 workers for every one job opening.) And while many companies are still sitting on mountains of cash, they remain uncertain about future consumer demand, government policies, etc.

And now… According to a new Gallup poll, the February unemployment rate hit 10.3%. Meanwhile, underemployment (that oft ignored, but vitally important, number) rose to 19.9%.  See below.

1) ECB RATE HIKE?: European Central Bank President, Jean-Claude Trichet, warned on Thursday that an interest rate hike may be on the table in April as commodity prices continue to pose an inflation threat.

2) MORTGAGE RATES DROPPING: According to Freddie Mac’s weekly survey, 30-year fixed-rate mortgages dropped for the third week in a row to an average of 4.87% this week.

3) PALLADIUM FORECAST: A new report forecasts that palladium could rise significantly on supply constraints as Russian exports are expected to reach a 15 year low.

4) EUROPEAN DOWNGRADES: The S&P credit agency is warning that Spain and Portugal could both face further downgrades over the next two months.

5) MUNI-BOND CRISIS: Economist Nouriel Roubini says that he expects defaults on municipal bonds to reach $100 billion over the next five years.

Finally… PIMCO’s Bill Gross is calling June 30 the D-Day for the U.S. economy. That’s the day that the Fed’s QE2 program is set to end.

“A federal watchdog agency says that overlapping and duplicate programs waste billions of dollars each year. Congress is taking this study so seriously that they’re ordering a second study to look into it.” —Jay Leno

“Costco has started selling designer wedding dresses for 40 percent less than boutiques. It’s the typical Costco deal. “I wasn’t planning on getting married, but  40 percent off…” —Jimmy Fallon

“Twitter was down for two hours on Saturday. It was terrible. I was forced to call random people out of the phone book and tell them what I had for lunch.” —Jimmy Fallon 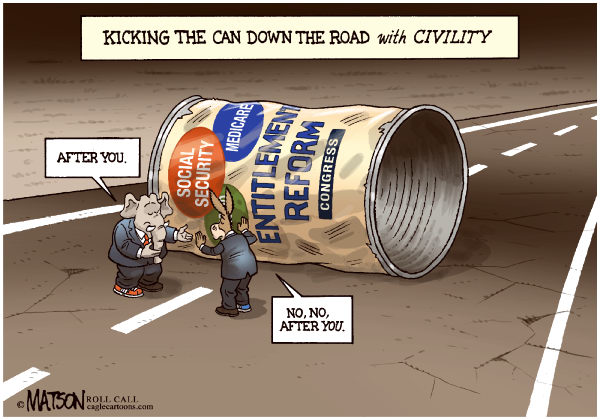