Wal-Mart CEO: ‘Serious’ Inflation is On the Way…

Wal-Mart CEO, Bill Simon, is sounding the alarm of what he is calling a coming wave of  “serious” inflation that he says will strike U.S. consumers in the coming months. On Wednesday, in an interview with USA Today, Mr. Simon explained that despite Wal-Mart’s attempts to cut costs on every level, price increases at the consumer level are simply unavoidable. Among the causes: large increases in prices for raw materials, increasing labor costs in China, rising fuel costs. (Earlier in the week, we told you that the era of cheap Chinese goods was over… read here)

Most U.S. retailers are experiencing rising costs at the wholesale level, yet many have attempted to absorb the increases in order to remain competitive in our tough economic environment. Because of Wal-Mart’s extremely low-cost business model, and the benefits that come from economies of scale, they should fare much better than other retailers. The outlook could be bleak for some in the retail sector ahead.

For years, I have been warning that a wall of consumer price inflation would strike this nation with a vengeance due to variety of factors, including poor monetary policy and massive Federal debt accumulation. It’s coming. And if the Federal Reserve announces a QE3 program later this year, as we fully expect, it could become even more severe.

How should you be preparing? You need a plan. While others urge you to debate, we have been urging you to prepare. And we have done our part by creating a plan for you to follow. We call it our Five Levels to Financial Freedom. (See here) It includes ideas on foreign currencies, precious metals, energy, and agricultural commodities, all of which we have been talking about since 2006. We even talk about the need for extra food and water supplies and storage. The best way to get started is to begin listening to our weekly financial radio show called Follow the Money Weekly. You can listen to last week’s program right here.

You need a plan. No one else will do it for you.

Billionaire Warren Buffett, chief executive and chairman of Berkshire Hathaway, has built a solid reputation over the last several decades as a no-nonsense investor. He is also known for his high integrity and ethics in an industry that is full of fraud and deceit. That is why the recent news within his company is making major headlines this morning.

Buffett, who is 80 years old, has long had a short list of successors who would take over his duties upon his departure from Berkshire. This week, one of those potential suitors, Mr. David Sokol, suddenly and unexpectedly announced his resignation from the company. Mr. Sokol, whom outsiders have long considered the most likely candidate for the position, has apparently made waves over the timing of his share purchase of a company just prior to suggesting that Mr. Buffett buy them as well.

The deal would have personally netted Mr. Sokol approximately $3 million in three months.

Mr. Sokol has adamantly denied that his resignation has anything to do with his investment in Lubrizol, stating that he “had no inside information and no knowledge if Warren would be interested or not in the company.”

According to the Wall Street Journal, Mr. Buffett issued the following statement regarding the matter:

“Dave’s purchases were made before he had discussed Lubrizol with me and with no knowledge of how I might react to his idea.”

Mr. Buffett said he learned of the extent of Mr. Sokol’s stock purchases five days after his offer to buy the company.

No word yet on whether the SEC will investigate.

1. ECB TAKES THE LEAD: For the first time in the European Central Bank’s history, it is not taking its cues from the Federal Reserve. The ECB’s interest rate policy is normally indirectly set by the Fed, but this month, Europe will raise interest rates despite the Fed’s continuing easy-money policies. The continual shift on global economic power is duly noted.

2. JOBLESS NUMBERS: For the second time in three weeks the number of people seeking unemployment benefits fell, this time by 6,000, according to a report released by the Labor department today.  This brings the seasonally adjusted number of applications for benefits to 388,000 for the week. Anything below 375,000 is currently considered a good sign by many economists. The monthly unemployment numbers for March will be released tomorrow.

3. HEAD COUNT: Today, India released new census figures showing that the country is now home to 1.21 billion people. Even though the population growth appears to be slowing, the United Nations still forecasts that the nation’s population will surpass China’s by 2030.

4. WAR ON GOOGLE: Microsoft is stepping up accusations against rival, Google, claiming that the company is unfairly thwarting competition in the online search market. Microsoft’s chief counsel, Brad Smith, filed a complaint with the European Commission, which has been investigating Google since last November, claiming that Google has displayed “a broadening pattern of conduct aimed at stopping anyone else from creating a competitive alternative.”

5. OIL SPIKE: More tensions in Libya sent crude oil prices rising to to $106.31 per barrel in intra-day trading on Thursday – their highest levels since September 2008.

You have to hand it to Mr. Donald Trump. He really knows how to milk the media for all they are worth. After last week’s pro-Obama blitz, Mr. Trump appears to have changed his tune. In an interview with Bill O’Reilly, Mr. Trump is now publicly questioning President Obama’s birth certificate saying that Mr. Obama may be a Muslim. You can watch the brief video here.

“Newt Gingrich said he is worried that America could become an atheist country dominated by radical Islam. Another thing to worry about is those pacifist warmongers. And if they team up with the communist capitalists, we’re all finished.” –Jay Leno

“We are now down to the Final Four. Just four Mid-East countries we haven’t attacked yet.” –Jay Leno

“A new survey found that 55 percent of men expect to pay on the first date. While the other 45 percent have never been on a second date.” –Jimmy Fallon

“Over a million female employees are suing Walmart claiming that women are paid less than men. Walmart denied the claim, saying they underpay all their employees equally.” –Jay Leno 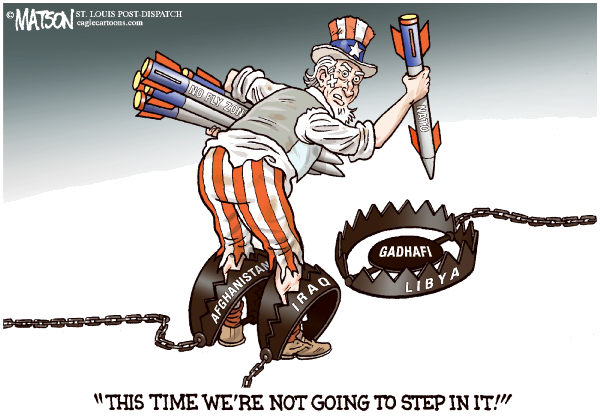