Scare Tactics at the Fed…

Almost three years after Bloomberg LP requested details on the emergency bank loans given out by the Federal Reserve at the height of the economic crisis, the records are finally being delivered. The records, which contain the

names of financial institutions who borrowed money through the Fed’s discount window, are being publicized today by Bloomberg. As we expected, the majority of the loans were taken by foreign entitities, that is, your tax-payer dollars were used to prop up foreign banks and institutions. In fact, one Libyan bank received 73 loans during the crisis.

This is the first time in the Fed’s history that it has revealed the identity of  borrowers through its discount window. But obtaining the records came at a great price. After being repeatedly denied access to the Fed’s records, Bloomberg took legal action. For nearly three years, the Fed resisted and fought the case all the way to the Supreme Court, only to lose in the end.

Of interest, however, were the Fed’s tactics in keeping the records out of the hands of the public. Their first reaction was to use threats. Consider this statement from the Fed back in 2009:

“Immediate release of these documents will cause irreparable harm to these institutions and to the board’s ability to effectively manage the current, and any future, financial crisis… and significant harms that could befall not only private companies, but the economy as a whole.“

Bloomberg argued that the emergency loans, made during the economic crisis, were the people’s money. Therefore, the American people had every right to know where their tax-payer money was going.

When the Fed realized that their threats were falling on deaf ears, they switched their tactics. They began begging and pleading to maintain secrecy of their failed bank bailout. The court system ignored their flawed logic and granted a great victory to the American people. You can read the latest here.

My analysis: How dare the Fed prop itself up on the broken backs of the American public and threaten another economic crisis if it’s actions are forced to be transparent. The Federal Reserve is a malignant disease of the worst sort. It is a leach on the American economy taking U.S. tax-payer dollars, and funneling them to foreign banks and Wall Street banksters. It serves as a willing crutch to carry  our financially injured nation into more danger. It holds our spendthrift politicians in its clutches and its intentions are abundantly clear. That this fraudulent and corrupt institution would demand a cloak of secrecy for its perverted actions is appalling.

In the end, the Fed lost a public legal battle, and its reputation is rightly smeared. Its claim of impending economic destruction through its transparency is just one bad prediction out of many in its past. And while it has lost one battle, it has won the broader war, as the American public still actually believes the spin.

The Fed is a fraud and should be ended immediately.

1. UNEMPLOYMENT RATE: 8.8%: The U.S. economy added 216,000 new jobs as the “official” unemployment rate fell to a two-year low of 8.8 percent in March, according to the Labor Department. The “official” numbers show 13.5 million Americans remain unemployed.

2. DO I HEAR $12 BILLION?: A bidding war over the NYSE… First, Deutsche Boerse, based in Frankfurt, offered to  buy NYSE Euronext for $10 billion. Now, news today that Nasdaq and the IntercontinentalExchange (ICE) have joined forces to make an $11.3 billion counteroffer.

3. RISE OF CHINA: A new survey shows that manufacturing in China increased in March on strong demand for autos and machinery.

5. RATE WATCH: The president of the Minneapolis Federal Reserve Bank is making news pointing to the need for a potential 75 basis point interest rate hike by December to stave off inflation.

Yuri Milner, a Russian billionaire investor, reportedly paid $100 million for a 25,500-square-foot French chateau-style mansion in Los Altos Hills, California. The sale is the highest known price paid for a single-family home in the U.S.

“Tiger Woods has a new 22-year old girlfriend. Friends describe her as outgoing, and someone who doesn’t follow the news.” –Conan O’Brien

“Even after citizens voted for it, Fort Wayne, Indiana, will not name a building after former mayor, Harry Baals. “We don’t want the city to be a punch line of a joke” said Fort Wayne spokesperson, Seymore Butz.” –Alex Kaseberg 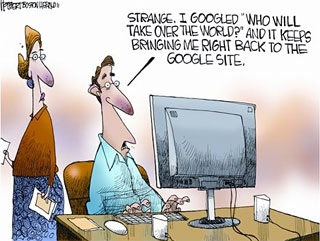