The fiscal insanity in Washington is on clear display for all to see. According to a report issued by the U.S. Treasury Department, the Federal government collected $194 billion in tax revenue during the entire month of March. Yet, during the same month, the Federal government reported $1.1 trillion in expenses. An in-depth article released by CNSNews.com headlines the problem well: “March Madness: U.S. Government Spent More than Eight Times its Monthly Revenue”

Among the expenses for the month of March…

How is the government able to stay open for business despite spending eight times it’s monthly income? By borrowing more money. During the month of March, the government reportedly sold $786.5 billion in new government debt securities. And the ponzi scheme continues…

While the Federal debts and deficits spike, our nation’s hard-working representatives in Washington are on edge this week as a government shutdown looms. The debate apparently is a tough one. The “spendthrift” Democrats appear willing to cut only around 0.5% from this year’s budget. On the other side of the aisle, however, the “cost-cutting” are demanding that the American public deserve a full 1% reduction of this year’s Federal budget. If neither side budges, the debate will lead to a government shutdown this Friday.

And now… The GOP is proposing $4 trillion in cuts from the Federal budget over the next 10 years. The cuts would amount to just less than 10% from the projected $46 trillion in Federal spending over the next decade. These types of cuts certainly mark a step in the right direction for the country.

1. BOOMER FEAR: The first big wave of Baby Boomers are beginning to retire and years of fiscal mismanagement and bad financial advice is just starting to sink in.

2. MOODY ON PORTUGAL: Moody’s cut Portugal’s credit rating down another notch this week warning that the country needs an immediate bailout.

4. DEFAULT SCARE: U.S. Treasury Secretary, Tim Geithner, is warning that the Federal government will reach its legal borrowing limit on May 6.

I have received quite a few emails regarding my commentary from yesterday entitled: “America’s Entitlement Mentality is Killing Our Nation.” The commentary also includes the #1 way to build wealth in this country, which many people commented on in their emails to me. Thanks for the emails, although some of you weren’t so nice… You can either leave your comment below the article or you can send your thoughts privately to me at jerry@ftmdaily.com

“According to a poll, 55 percent of college students approve of the job President Obama is doing. That may change once they graduate and try to find a job.” –Jay Leno

“TLC will start airing new episodes of “Kate Plus 8.” And they’re going to keep airing them until Gadhafi agrees to step down from power.” –Jimmy Fallon

“If the government shutdown occurs, there may be a freeze to all new wars in the Middle East.” –Jay Leno

“A woman in the United Kingdom left her daughter out of her will because she didn’t like the name of one of her grandchildren. That means no inheritance for the woman, or for her baby, little “Grandma Sucks.” –Jimmy Fallon 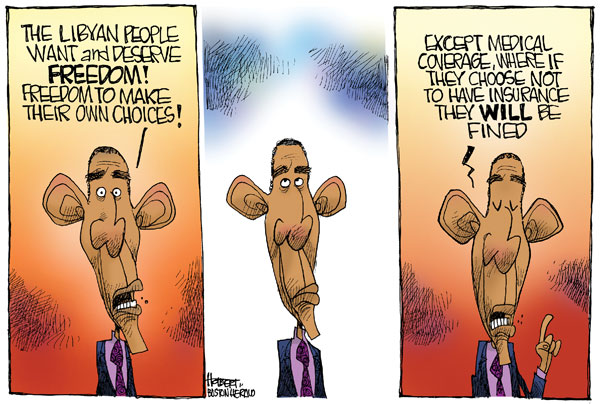