How to Buy Foreign Currency

Holding a portion of ones portfolio in relatively stable foreign currencies is an important part of diversifying away from the U.S. dollar.

It is important to distinguish “holding” currency from “trading” currency. “Holding” a currency is what you do everyday when you have a checking or savings account, a brokerage account, or a retirement account. All of these accounts are held and settled in one currency (usually the U.S. dollar if you live in the United States). But the act of “trading” currencies is much different. “Trading” currencies refers to a specific and speculative action in which you bet for, or against, one currency during a short period of time. This concept is similar to trading stocks, only in this case, the financial instrument being traded is a pair of currency futures.

This article discusses how to buy foreign currency for the purposes of “holding” currency, not for short-term “trading” of currency.

#1 Buy and Hold the Physical Currency

Buying physical foreign currency is as simple as picking up the phone and calling your local bank. Almost all larger banks have a foreign exchange department where you can trade in your home currency for another currency. The fees on this vary, so you will have to contact your bank for more details. This is usually the most expensive way to purchase foreign currency.

Over a decade ago, an FDIC-insured bank called Everbank, now called TIAA Bank, began offering their clients access to foreign currencies through the familiarity of Certificates of Deposit (CDs). The Foreign Currency CDs are unique in that your principal is FDIC-insured against a bank failure. However, your principal is not insured against loss in the foreign exchange markets. Typically, you will need a minimum of $10,000 to open one of these accounts, and they are IRA eligible. I encourage you to look at TIAA Bank’s website. It has some wonderful resources for those who are thinking about diversifying into foreign currencies. You can learn more about TIAA Bank and their foreign currency CD’s here. 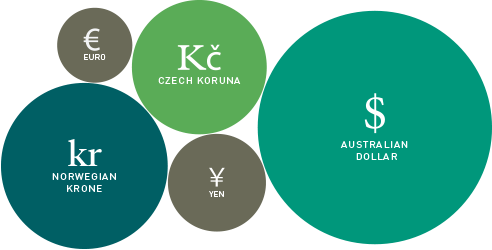 You can gain direct exposure to many foreign currencies today through ETFs, which stands for exchange-traded funds (or similar ETNs, which stands for exchange-traded notes). These ETFs trade just like a stock, and you can purchase them through your brokerage account or IRA just like you would purchase a stock. Similar to mutual funds, ETFs have fees, but they tend to be much lower than mutual funds.

You can buy single-currency ETFs, for example, the CurrencyShares Australian Dollar Trust ETF (Ticker Symbol: FXA). You can also buy ETFs that offer exposure to a basket of foreign currencies, but many of the currency basket ETFs may carry additional risk due to low trading volume.

We track — and rank — nine foreign currencies every week.
Become a member and unlock instant access.