Welcome to Follow the Money’s Weekly Metals Update for the week of October 9th!

With the Chinese markets closed and gold perched just above key support, the commercial banks seized the opportunity to dump massive amounts of paper futures contracts on the COMEX, triggering stops, margin calls, and initiating a flood of selling.  Meanwhile, in the physical market, demand surged as smart money was content to purchase additional metal at a discount.  It’s important to recognize that metals prices are set based upon the supply/demand of paper contracts traded on the COMEX, where the large commercial banks can place enormous sell orders at illiquid trading hours to nudge the paper price below key support levels.  With upside momentum naturally fading and gold and silver just above key support, this week presented an opportune time for the heavily short commercial banks to give price a shove lower.  Once key support is broken, momentum-based hedge fund trading algorithms often take over, allowing the banks to cover short positions at a lower price.  I believe that is exactly what unfolded this week.  While the metals were due for a healthy correction, and other sectors that are also sensitive to interest rates traded lower this week, none sold off with the magnitude and volume of the precious metals sector.

The subsequent inability of the metals to mount a substantial rally after the inaction of the Fed several weeks ago, combined with the series of lower highs and all-time record commercial bank short positions were the primary reasons for my cautious approach in previous weeks.  In hindsight, these signs should have dictated a more aggressive tightening of stops, profit taking, hedging with puts, or some combination of the above.  While many of us (like me!) may have given back more gains than we would have liked, the lessons learned and experience gained from weeks like this have the potential to more than offset any monetary losses.  As the metals bull resumes, I expect wild gyrations like this to become increasingly frequent.  Let’s use wild swings like this to refine and improve our strategy and trading rules to better handle the increased volatility that is undoubtedly forthcoming in the months and years ahead.

On a more optimistic note, gold and silver were each able to close the week above their respective 200MAs. (Gold reclaimed the 200MA by rallying $7 in the after market–not depicted on the chart below.  Likewise, silver reclaimed the $17.50 level.)  GDX is a few pennies shy of its 200MA. The entire metals complex is very oversold, resting just above key support and due for a sharp bounce.  If that unfolds, short of a “black swan” event, I will remain skeptical that a sustained rally to new highs will unfold in the immediate term, as the charts likely need a bit of time to recuperate from the short-term technical damage.  As we’ll see in the Commitment of Traders report below, the big banks still have a large number of shorts to cover before the CoT will be back to even a neutral posture.

The possibility of a 50% retracement was also mentioned in previous weeks.  The 50% retracement numbers are $1225 (gold), $17.50 (silver), and $23 (GDX.)  GDX and silver are at those precise levels, with gold about $30 above.  Let’s see if we can hold these levels!  I’m cautiously optimistic, but lower prices are certainly a possibility .

In the meantime, I’ll be using this weakness to accumulate physical metal on the dips and build cash, while waiting patiently for a resumption of the uptrend before placing any position or swing trades.

*Going forward, there will be shorter commentaries on a weekly basis for FTM members that focus more on the shorter-term price movements, identifying specific trade set-ups, and profiling miners with top Smart Scores, while keeping the monthly issues more in-depth and free to the public.

**FTM is still offering a generous Fall promotion where the first month of membership is just $1, and no commitment after that. 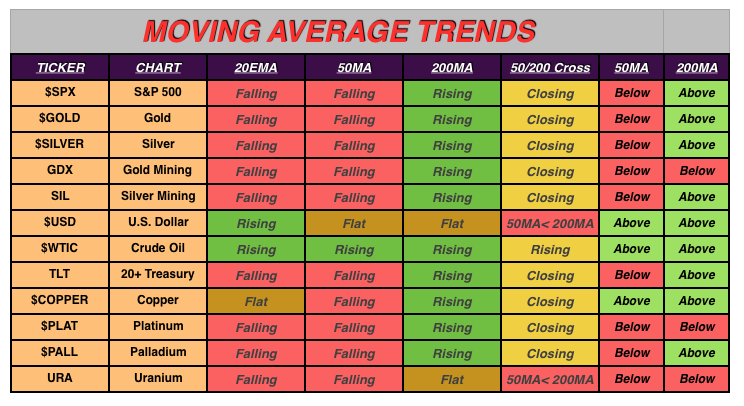 If gold can maintain its footing above key support at $1250 and the rising 200MA ($1257), look for some “backing and filling” between the $1250 and $1308 levels for at least a few weeks.  Some consolidation and the formation of a proper base would bode well for gold when the uptrend resumes. 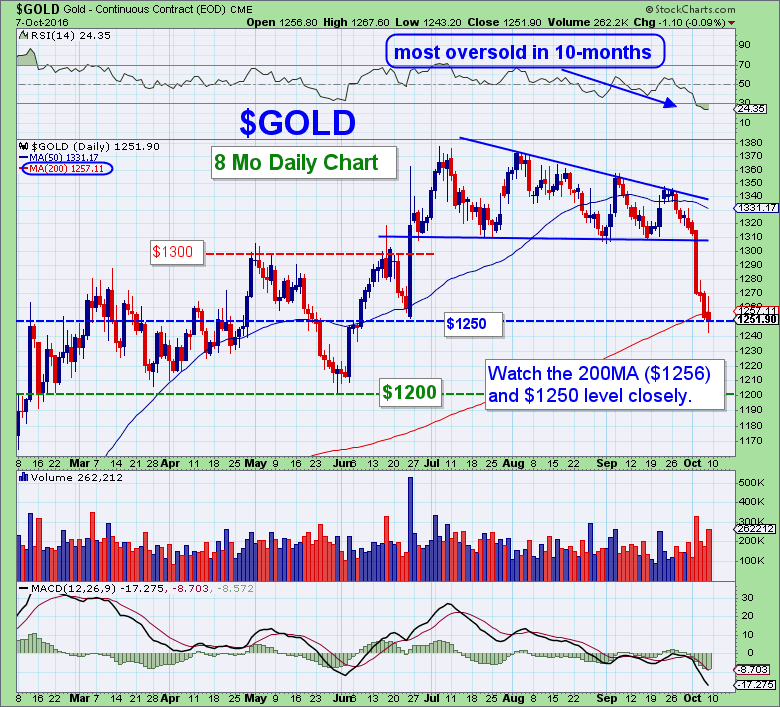 Meanwhile, China continued its accumulation strategy by adding another 5 tons in September.  These figures are drastically understated.

I’m expecting silver to churn sideways in a trading range as the technical damage is repaired and a proper base is formed. 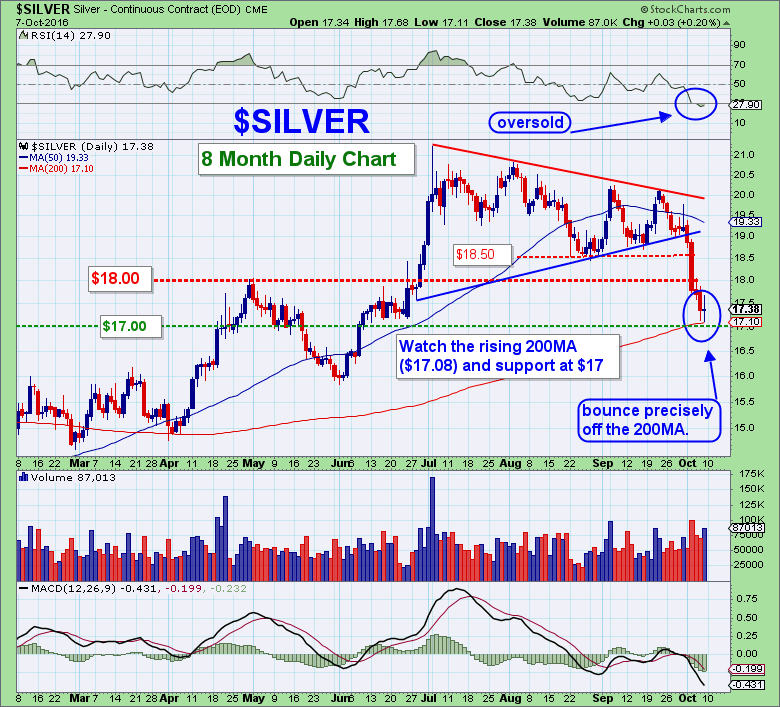 GDX is down ~ 30% from its recent high and sits just above solid support at $22.

Like the underlying metals, if support holds at $22, I’m expecting some consolidation before immediately charging to new highs.  That would be healthy.

The area between $26-$27.50 will be formidable resistance when the uptrend resumes. 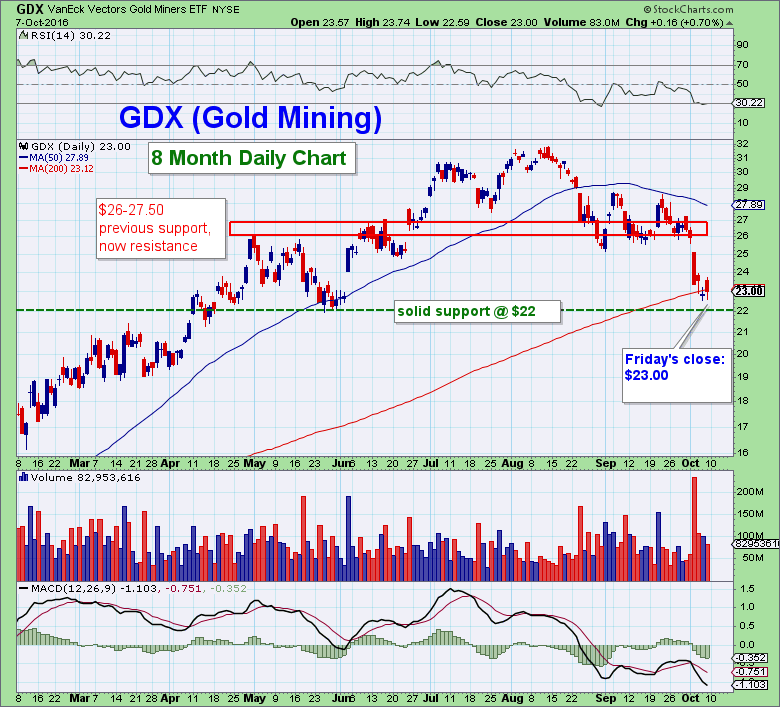 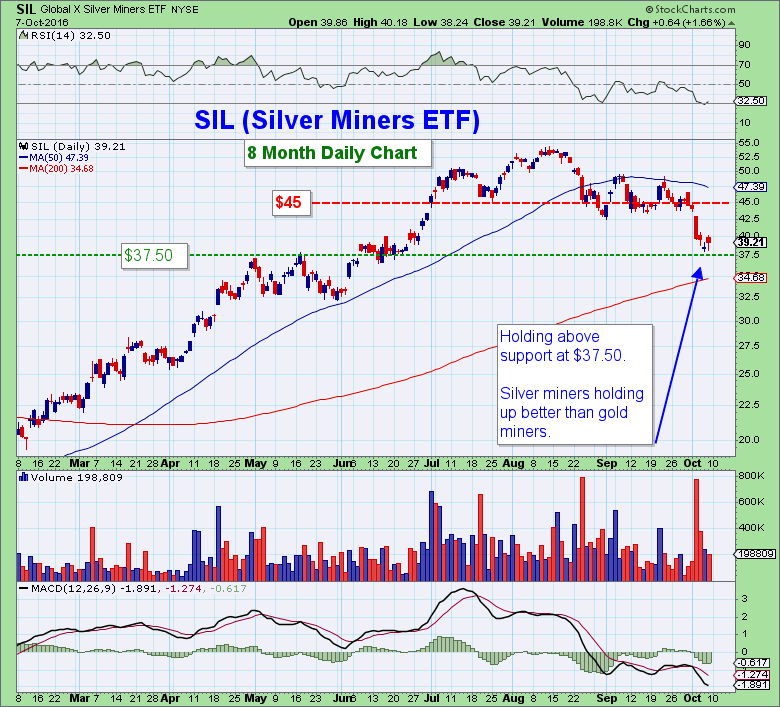 While there was a marked improvement in this week’s CoT, the chart below illustrates that the commercial banks (vertical blue lines) still have a lot of shorts to cover before returning to historical norms.

That said, the CoT data is captured on Tuesday and does not reflect the additional selling that took place during the remainder of the week.  I’m confident that the data has improved since Tuesday.

It’s reasonable to speculate that the commercial banks almost got burned on this year’s rally and, going forward, may be reluctant to revert back to their normal behavior of shorting uptrends.  IF the banks “cease and desist” from their price suppression schemes on the next rally, fireworks to the upside would no doubt ensue.

Silver Wheaton (SLW) ranks at the very top of FTM’s proprietary SmartScore rankings for silver mining, streaming and royalty companies, and is my favorite silver stock to trade.

I look forward to providing more in-depth profiles and analysis of top mining companies, based on FTM SmartScore rankings, in future updates and reports! 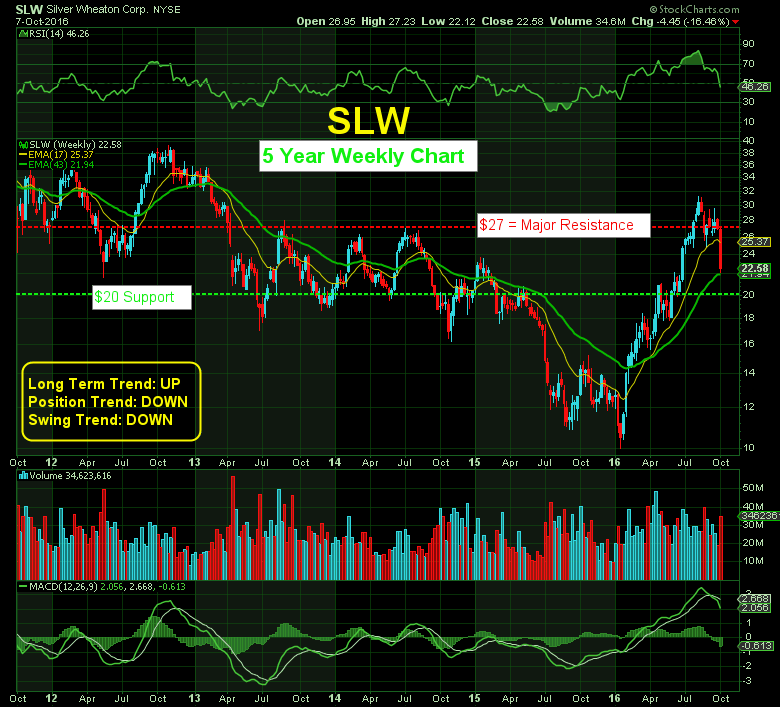 This week, let’s watch for high volume bounces off of the key support levels and for the 200MAs to hold as support.  The recovery sequence will be to first stop the decline, then form a proper base while consolidating, and finally await a suitable catalyst to propel the metals back into a sustained uptrend and, ultimately, to new highs.

I hope you enjoy the new, more concise format and look forward to bringing you valuable new content in the weeks ahead!

“The prudent see danger and take refuge, but the simple keep going and pay the penalty.” (Proverb 22:3)

“You can avoid reality, but you cannot avoid the consequences of avoiding reality.” -Ayn Rand