Welcome to Follow the Money’s Weekly Metals Report for the week of September 18!

The metals traded lower this week, once again testing support near $1308 / $18.50 and are in clear short-term downtrends.  Gold has closed lower 7/8 previous trading sessions and silver 6/8.  The only bright spot in the metals complex this week was a rallying copper price, which tends to benefit silver.

Once again the dollar rally corresponded with a rise in treasury yields.  Recent Treasuries held in Custody (TIC) data showed foreign central banks selling U.S. debt at a record pace.  If this trend persists, it will leave the Fed as the “buyer of last resort.”  The U.S. simply cannot afford to allow interest payments to rise.  Consider that,  with a $20 Trillion debt burden, each 1% rise in interest rates equates to an additional $200 Billion of interest payments annually.  When rates return to levels more in alignment with historical norms, the majority of Federal tax receipts will go towards interest payments on the national debt. Contemplating the implications of that eventual reality is worth serious consideration, and there’s no time like the present to begin positioning accordingly.  Here is a great place to get started.

Another wildcard for the metals will be the Bank of Japan meeting this Wednesday, which will coincide with the Federal Reserve meeting the same day.  An aid to Prime Minister Abe suggested that negative rates have been beneficial [huh?], which could signal rates going even further negative.

Speculation and opinions abound as to whether the Federal Reserve will raise interest rates at their Sept 21st meeting next week, and the outcome will likely determine the short-term direction of the metals.  The heavily short commercial banks would like nothing more than to see initial support levels give way.

It’s instructive to consider whose interests the Federal Reserve is actually concerned with, when considering its next move.  I see several options:

With approximately 75% of the world’s debt yielding less than 1%, it’s difficult to imagine rates going up anytime soon.  In fact, it’s very possible that we will see a move towards zero or negative before any type of rate increase.  The market is only pricing in a 15% likelihood of an increase next week, but is still placing the odds of a hike by December at 43%.  If the Fed relents and it becomes clear that a rate hike is not forthcoming, I view that 43% as potential “fuel” for a short-covering rally in the weeks ahead, as trading positions are realigned.

Gold once again tested the bottom of its 3-month $1308-$1375 trading range and closed below a down-sloping 50MA for the second consecutive week.

On the 3-month daily chart you can see that gold is in a clear short-term downtrend, based upon the series of lower highs and lower lows.

Selling volume has been moderate, indicating low conviction selling.  It’s likely that many traders are stepping aside until this week’s Fed meeting is over.

As stated last week, position traders might consider waiting for a decisive break above or below the $1308-$1375 trading range before taking a position.

Swing traders have done well buying near the bottom of the range and selling near $1350.

For any trader or investor, the combination of Trigger Trade Pro and twice weekly trading conference are a recipe for success in any market or investing timeframe.  (Follow the Money has a generous promotion for the month of September.) 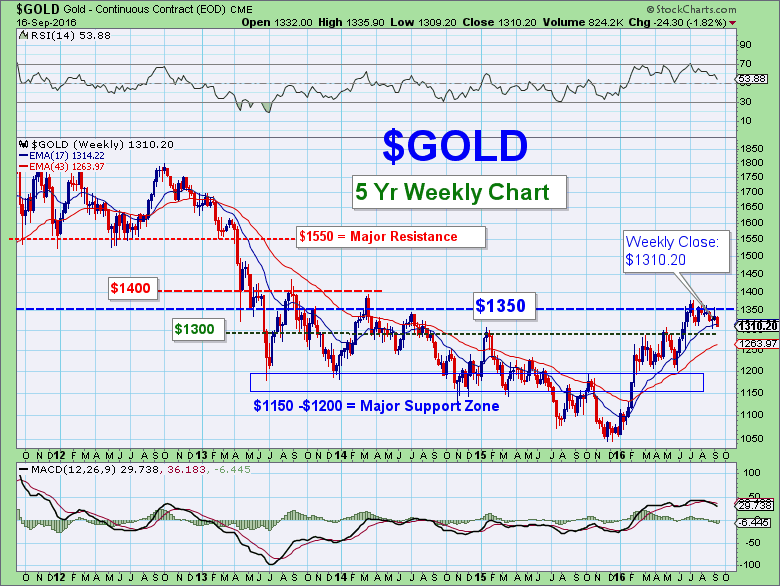 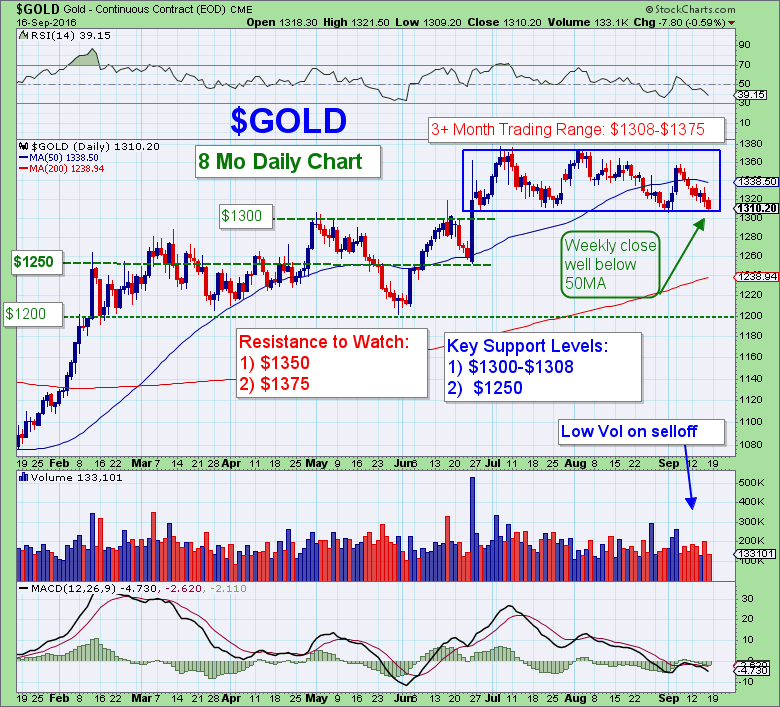 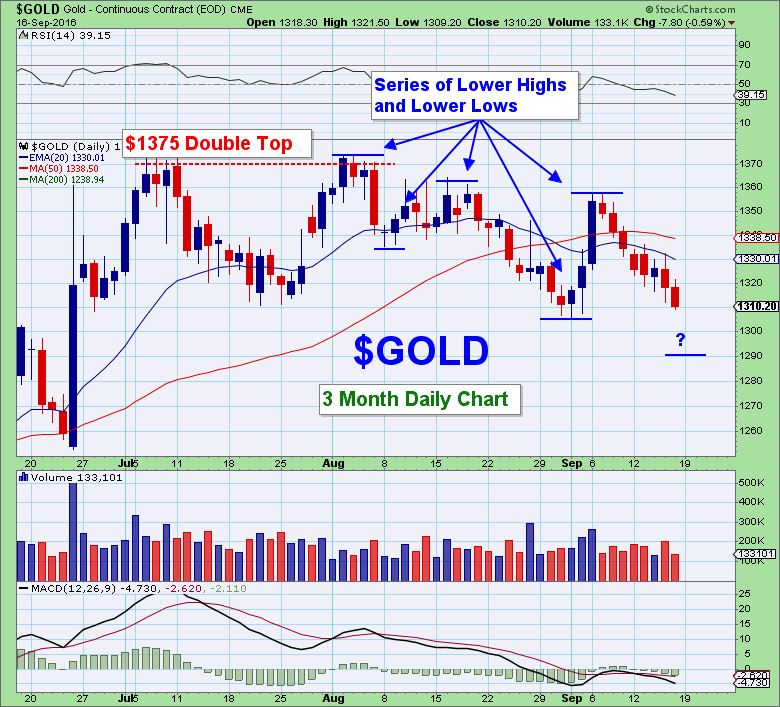 Silver closed below the $19 level and a 50MA that’s rolling over for a second consecutive week.

On the upside, the big hurdles will be clearing $20 and the previous high of $20.75.  That would set the stage for a run towards big overhead resistance at $22.

Selling volume has been light, as traders await clarity regarding the next move on interest rates.  With the bank’s massively short both metals, I would not be surprised if they try to push gold and silver below their key support levels before the Fed announcement on Wednesday.  If that plays out, silver could arrive somewhere near $18 in an oversold state prior to the Fed and BOJ announcements on Wed morning, leaving the metals primed for a quick bounce.  That’s not a forecast, but merely a distinct possibility. 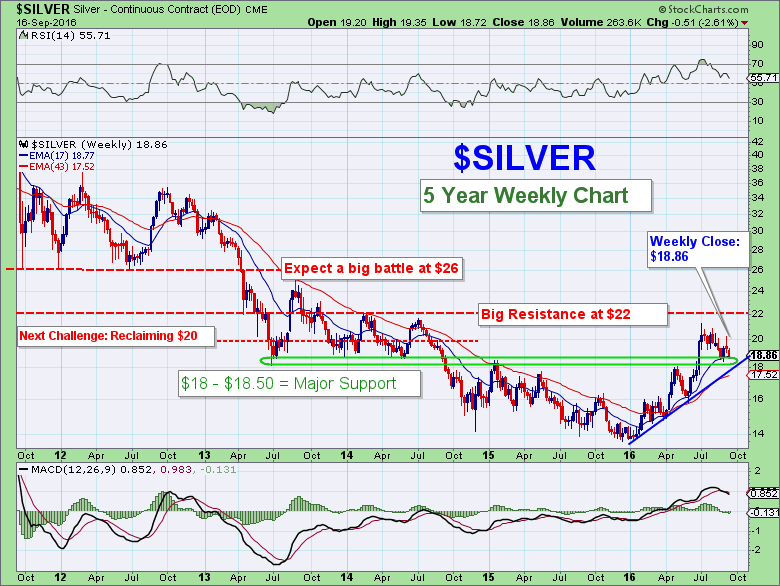 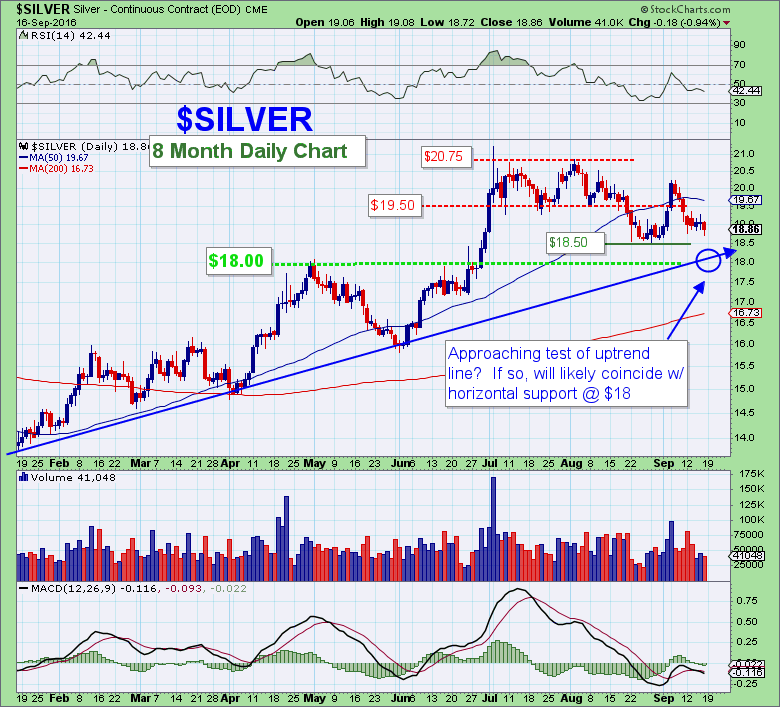 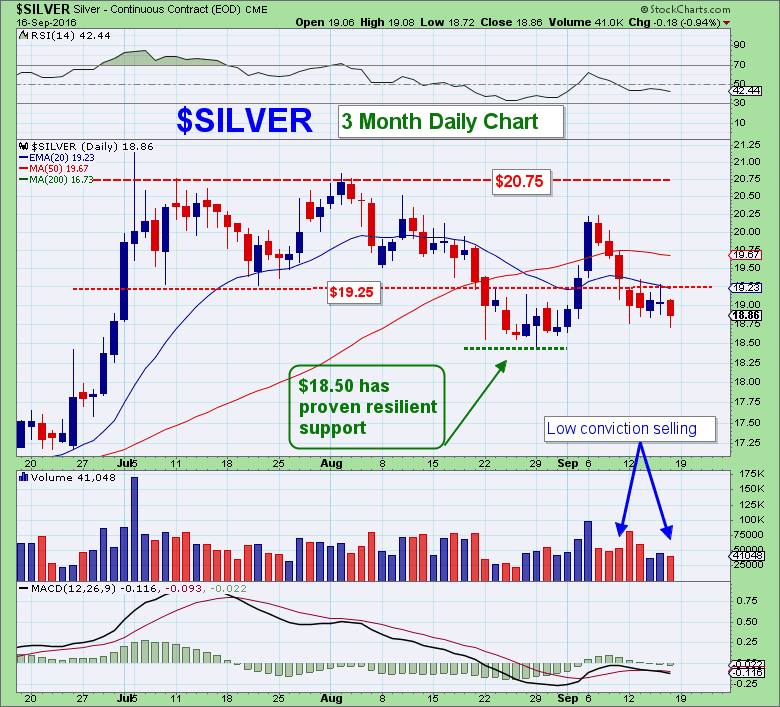 With platinum getting quite oversold on its RSI, look for a bounce off $1000 support.  If that occurs and platinum can quickly retake its 50MA, it will again be in a bullish posture and poised to resume its advance.

Should the 200MA give way, it would be prescient to await signs of the uptrend resuming prior to risking hard-earned capital.

Platinum is historically undervalued relative to gold, and will likely outperform when the uptrend resumes. 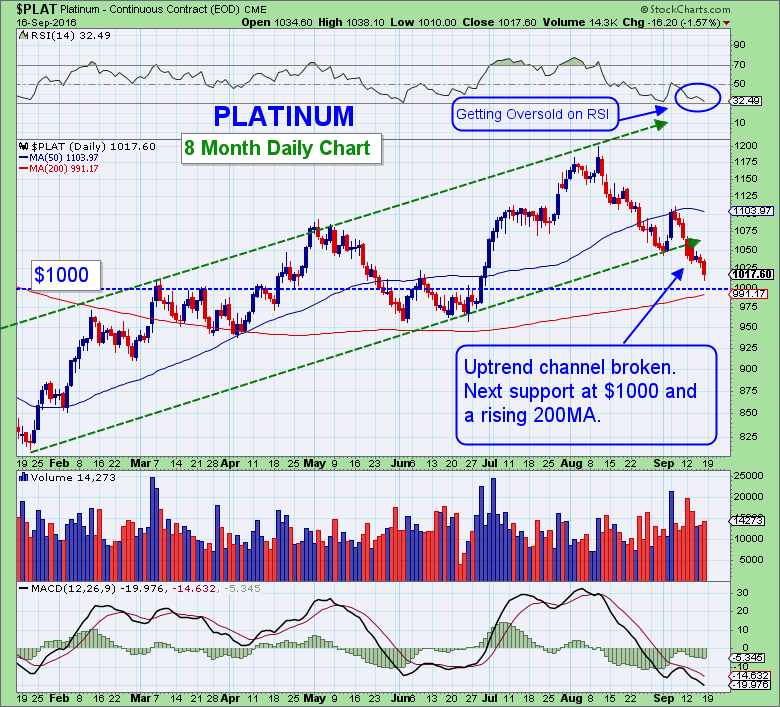 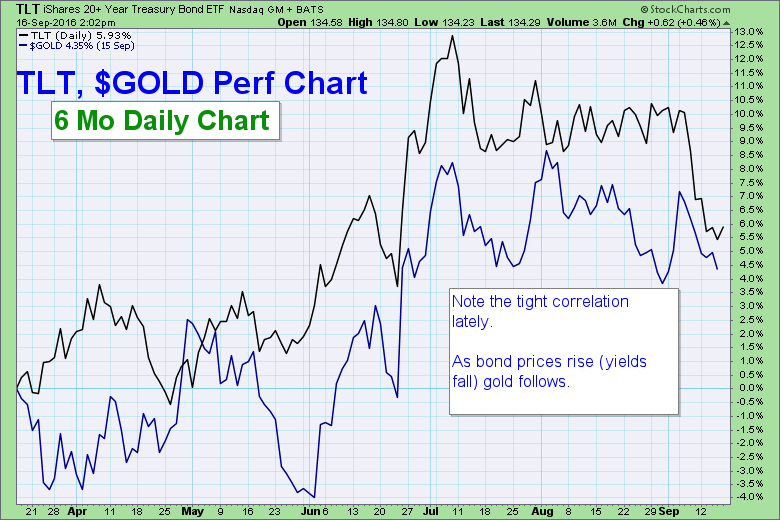 While not a “tick-for-tick” 100% correlation, you can clearly see that gold likes low yielding government debt.  The global trend towards negative interest rates is a tremendous positive for gold.

The area between $26 and $27.50 is critical for the mining stocks, as clearly seen on the 5-year weekly chart.

$22.50 is strong support and would represent an approximate 50% retracement of the recent rally — not an uncommon occurrence.

Retaking $27.50, and subsequently clearing $30 and $32, represent initial obstacles for the mining stocks. 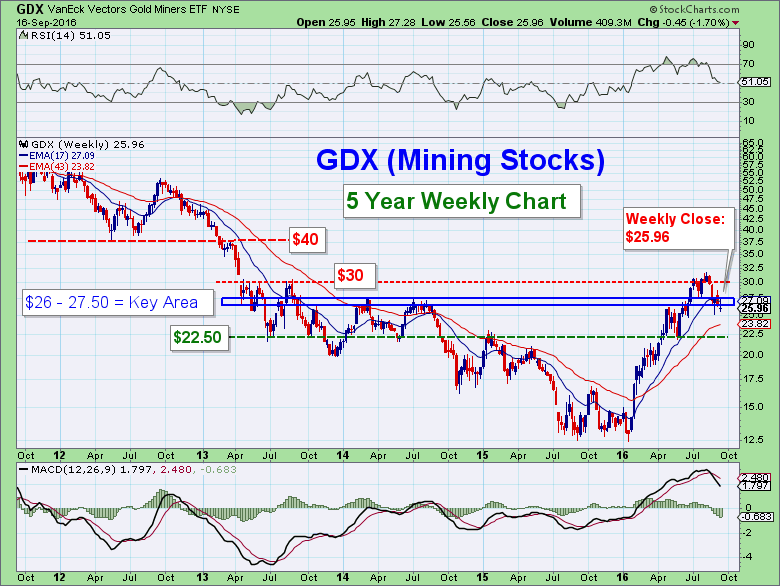 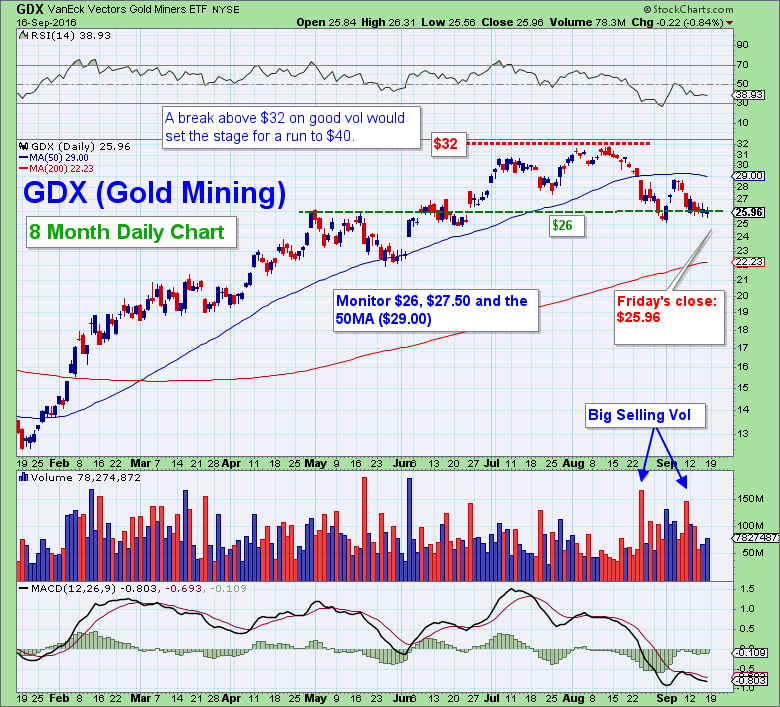 At the risk of sounding like a broken record, expectations regarding future interest rate policy will likely determine the near-term direction of the dollar.  I really look forward to basing analysis less on the prognostications of a few Fed officials and more on actual fundamental and technical indicators! 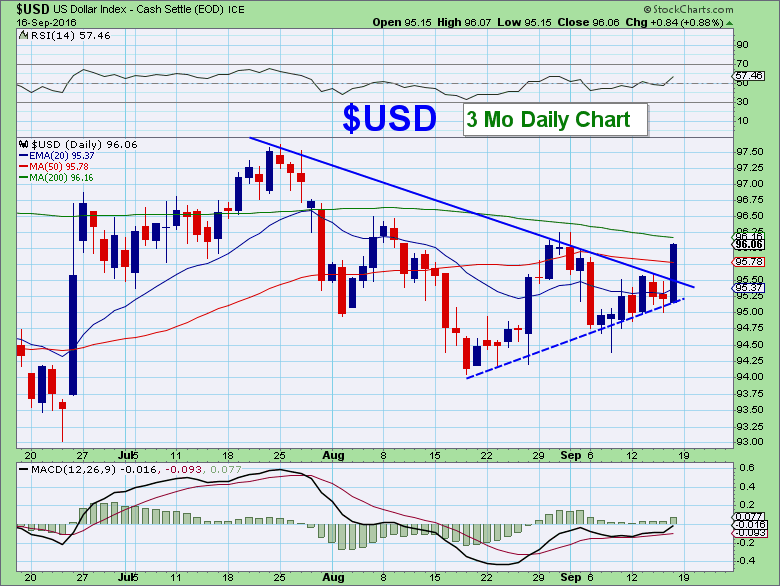 Copper rallied strongly this week, advancing each of the last five days.

Copper trading above a rising 50 and 200MA bodes well for silver.  The last three days of trading have been a battle for copper to retake its 50MA, illustrating the significance of technical analysis.  That line clearly matters to big money traders and institutions.  Copper closed the week precisely at the 50MA ($2.16.)

While not yet established in a long-term uptrend, copper appears to be carving out a solid base above $2 after a brutal multi-year downtrend. 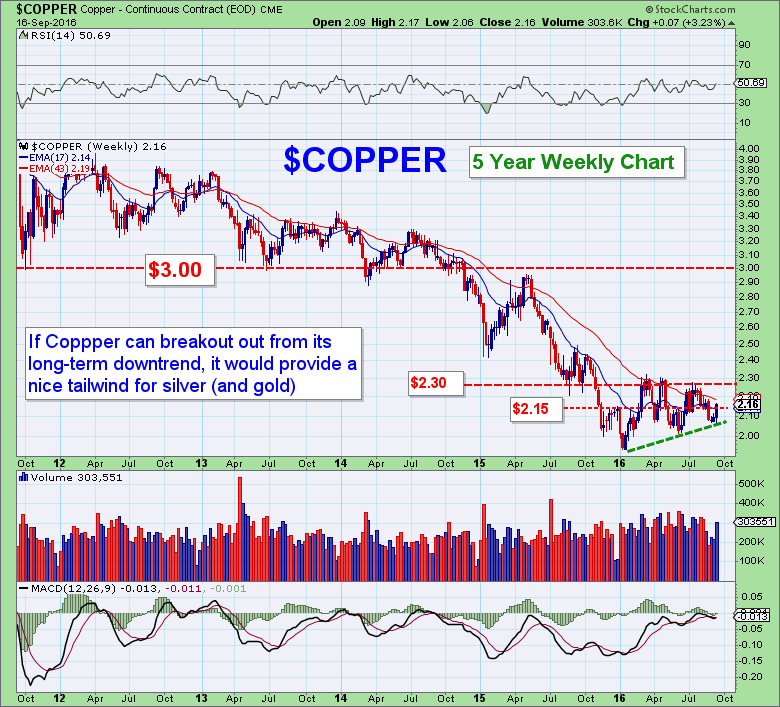 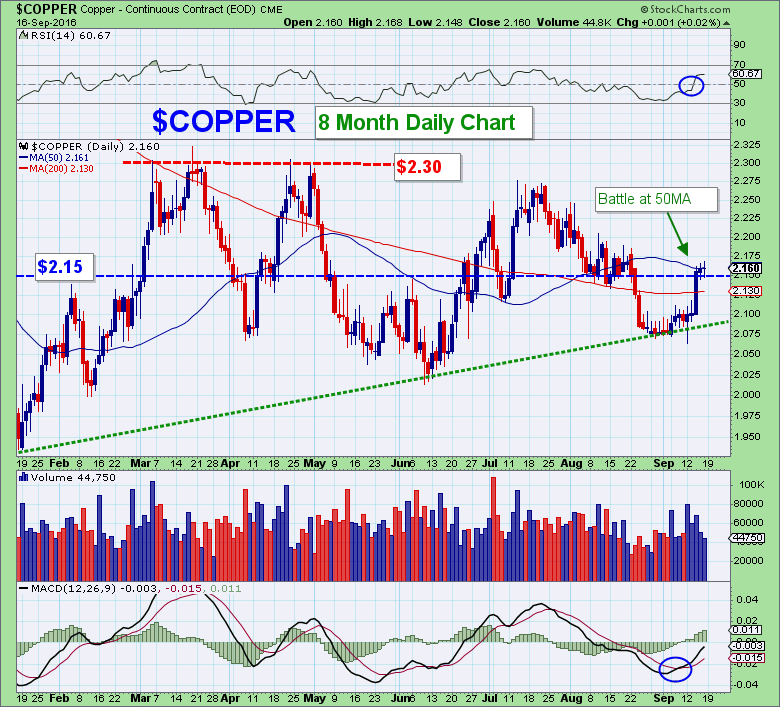 Like copper, a rising oil price would be a positive for the metals–especially silver as both a monetary and industrial metal. 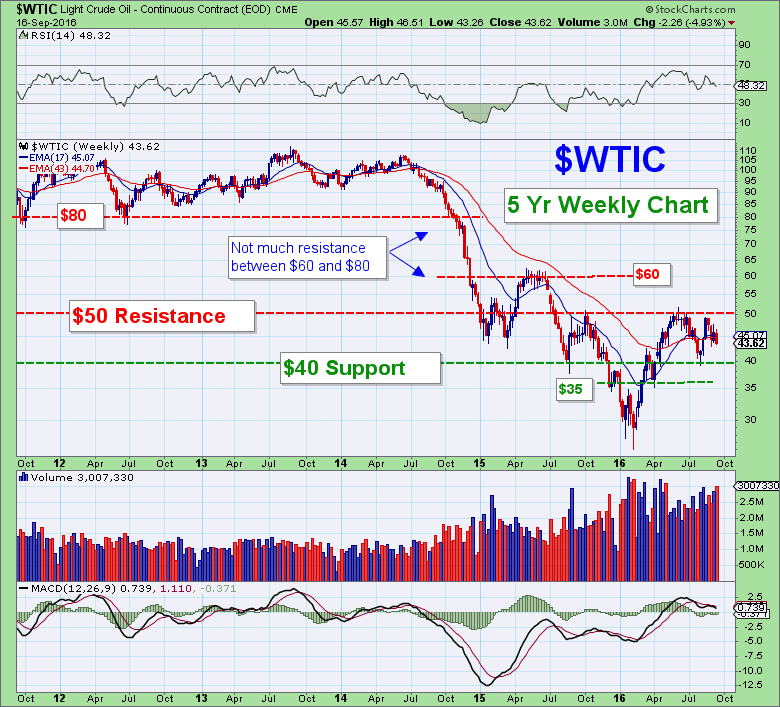 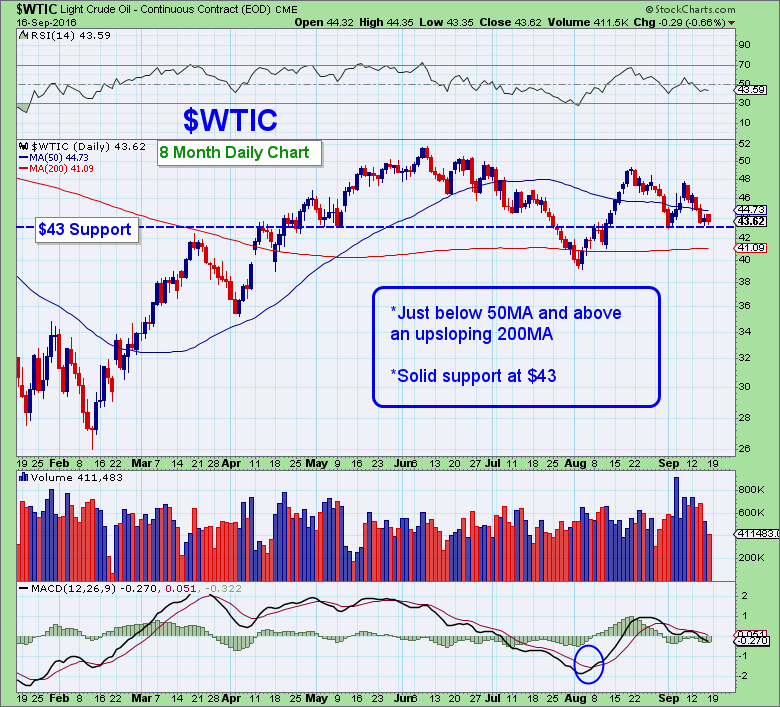 Each week I’ll highlight one component of the FTM P.A.C.E portfolio.  I’ve been monitoring solar, as the TAN Solar ETF may be forming a base near the $19 level, after a 63% decline over the past 18 months.

TAN is working itself towards the apex of a descending triangle pattern that should resolve in the coming weeks.  There is speculation that the next “stimulus package” may be global in nature and involve massive infrastructure projects geared heavily towards clean energy.  Solar stands to benefit from any such action.

Of course, FTM will be watching for price and volume to confirm a new uptrend before entering.  FTM members will be alerted in the Weekend Briefing, as well as the twice-weekly conference calls with Jerry Robinson, should a new uptrend be confirmed. 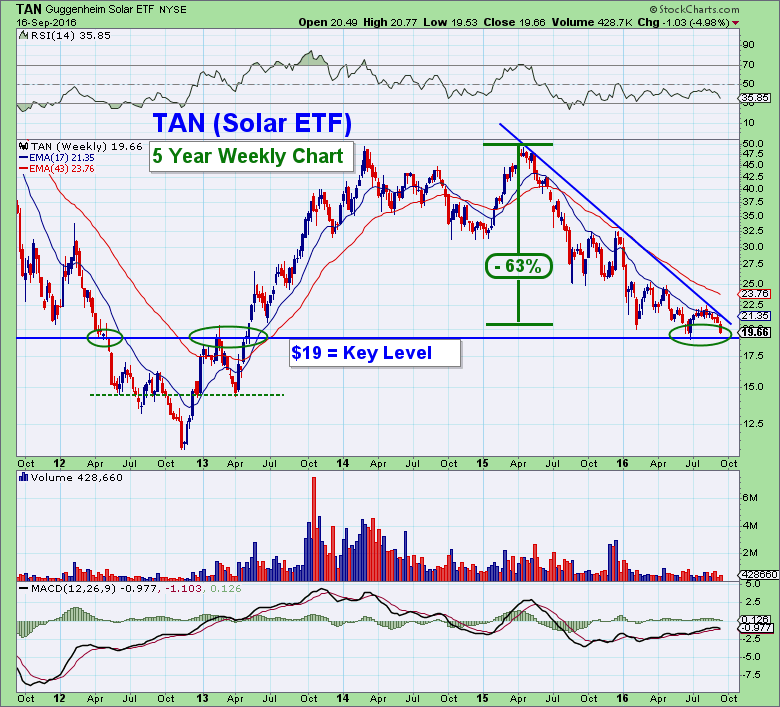 There isn’t much new to report regarding the CoT.  While the big banks have covered some of their short positions into the recent decline, they remain positioned heavily short.  A sharply lower price is still in their best financial interest.  While I don’t like betting against these guys, they have clearly not been able to exert the same influence that they were once able to, and the possibility remains that they will have to cover into a rising price.  We’ll see.

Monitor the key initial support zones at $1300-$1308, $18-18.50 and be on the lookout for the banks to give price a shove in their direction (down) prior to the FOMC and BOJ announcements on Wednesday.

Gold, silver, and the mining stocks are nowhere near oversold and are once again postured in such a way that I am increasingly weary of a quick shove lower to near the $18 and $1250 levels, respectively.  We’ll have to see how price and volume respond if $1300 and $18.50 are tested early this week.  A high volume bounce off of those levels would alleviate much of the short-term concern.  Clearing $19.75 and $1375 would set the stage for the next run higher.

There are plenty of sites out there more than willing to tell you what “they know” will happen in the metals.  Be weary of such omniscient claims.  It is my sincere belief that FTM’s approach of following trends and not opinions is the best –and most profitable– analysis available and offers incredible value to subscribers.

Have a great week!

“The last duty of a central banker is to tell the public the truth. “
–Federal Reserve Board Vice Chairman Alan Blinder (retired)
“One man with a gun robs a bank; a few men with banks rob the world”
-Gerald Celente