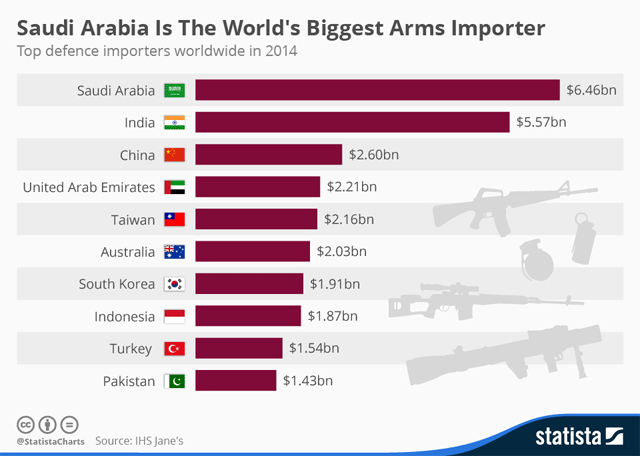 This morning, I must admit that I am greatly disturbed by the above chart.

As the Netanyahu/GOP/FoxNews machine actively targets Iran in the global press with dire warnings of what will happen if the nation is able to upgrade its military might, Saudi Arabia has been quietly amassing a deadly military arsenal, including nuclear weapons.

Could it be that the U.S. has turned a blind eye to the Saudi military build-up because they are the country’s top military exporter/supplier?

The double standard that the West displays in the region has never been more pronounced. And one day, I believe that our choice of “friends” in the region will cost us dearly.

All told in 2014, Saudi Arabia and the United Arab Emirates (UAE) spent a total $8.7 billion on defense — more than all of Western Europe combined.

And according to the latest estimates, $1 out of every $7 that will be spent on global armaments in 2015 will come from Saudi Arabia.

And according to numerous reports, the Saudis have already purchased nuclear warheads from Pakistan, which will be delivered in the event that Iran finally goes nuclear.

I would have more respect for those putting pressure on Iran if they would at least be equitable in their judgments.

Why is a nuclear Saudi Arabia better than a nuclear Iran?

But there is one important difference between the two countries.

Saudi Arabia sells its oil in U.S. dollars and agrees to postpone further war with Israel. (Saudi Arabia has fought at least two overt wars with Israel in recent times: 1948, and to a lesser extent in 1967.)

Meanwhile, Iran attempts to use other currencies besides the dollar for its oil sales. (FYI: Iran did not join Saudi Arabia in their 1948 and 1967 wars against Israel.)

While the situation in the Middle East is admittedly difficult, America is currently making very poor choices in the region.

Put simply, the U.S. continues to dominate the global arms trade, supplying one-third of all global arms exports in 2014.