Welcome to Follow the Money’s Weekly Metals Report for the week of August 28!

It didn’t take long for the potential selloff discussed last week to materialize with silver breaking down from its 8-week trading range and subsequently bouncing precisely off of the $18.50 level.  Gold was also down on the week, but remained within the confines of its $1308-$1375 two-month trading range.  There were several instances of large sellers dumping huge amounts of futures contracts to get the ball rolling to the downside.  Normal profit-taking is to be expected, but logic dictates that a “for profit” seller would not simply  dump $1.5 Billion worth of gold futures contracts in a 1-minute timeframe.  Recall that a small handful of commercial banks are holding enormous bets on lower metals prices.  Hmmm.

That said, the point of this weekly report is not to rehash all of the blatant corruption in the financial system, but rather to analyze and interpret the data and trends to better identify entry points for acquiring physical metal, become more profitable traders, and to plan wisely for the unwinding of this debt-based monetary system.  While the corruption is loathsome, the objective here is to properly analyze the data and respond accordingly.

So, with the short-term trend back to down, is it time to lock-in recent profits or are we being presented with an opportunity?  More on that in the charts below.

It is my hope that this report provides value for both the “stacker” attempting to hedge against the prevalent lunacy of central planners as well as for those desiring to trade profitably.  It’s frequently said that “attempting to trade a manipulated market is a fools errand.”  While that may be true for some, applying wisdom, proper discipline, and prudent risk management combined with a proven system and guidance from a successful veteran can make trading a lucrative additional income source for many.

As usual, there’s much occurring behind the scenes not being reported by the mockingbird media that has important implications for everyday people.

Gold never traded above $1350 this week after selling off in the overseas market Sunday evening.  Someone started the day off on Mon by dumping ~ $1.5 Billion of gold futures contracts at 8:40AM EST.  This set the tone for the week, dropping both metals below their respective 50MAs. 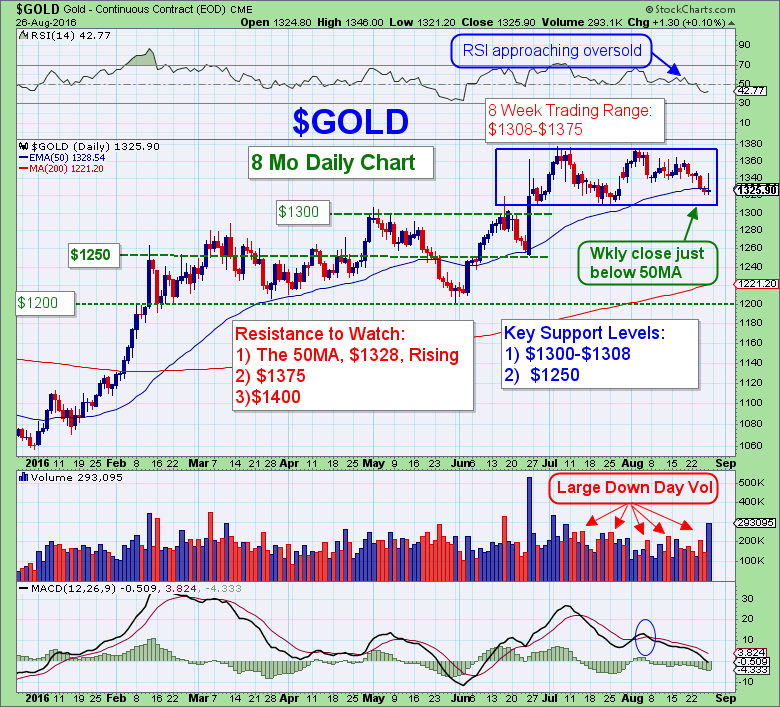 Despite the selling, gold has not broken down from its 2-month trading range.  Gold closed the week $3 below its 50MA after a failed rally attempt and bearish candle on Friday. 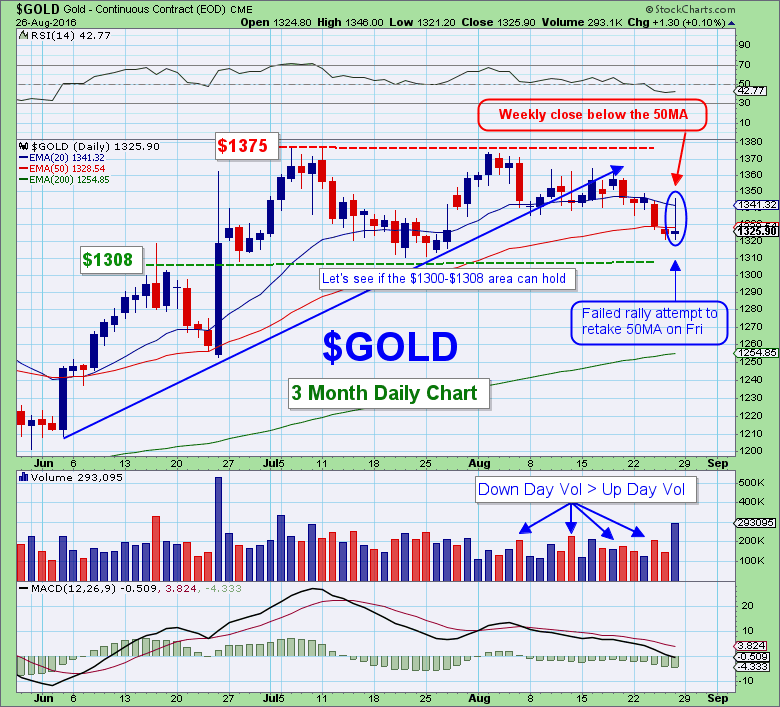 Like gold, the selloff in silver began Sunday evening and barely looked back.  $19.25 had served as a floor for nearly 2 months before giving way.

Silver closed the week just above the technically important $18.50 level. 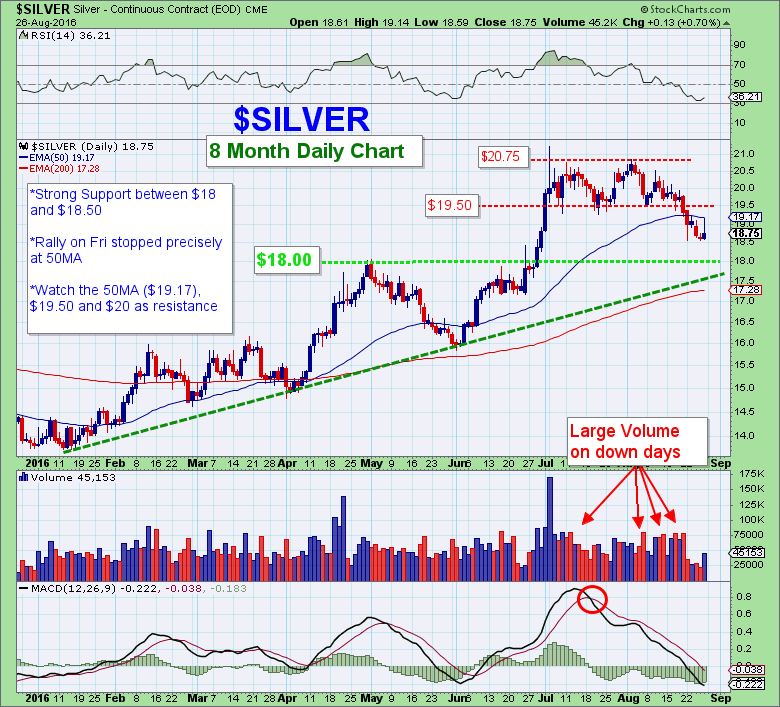 Friday’s rally was halted precisely at the 50MA before reversing to close near the lows of the day.  That’s bearish.

There is very strong support between $18 and $18.50.  RSI is already indicating oversold, so a bounce soon would not be surprising before a retest of $18-$18.50 support.

Bear in mind that the commercial banks still have a lot of shorts to cover.  Would enough buyers emerge to absorb another $1.5 billion instant sell order? We’ll have to watch support levels closely and look for a high volume bounce off of support for the first sign of a reversal. 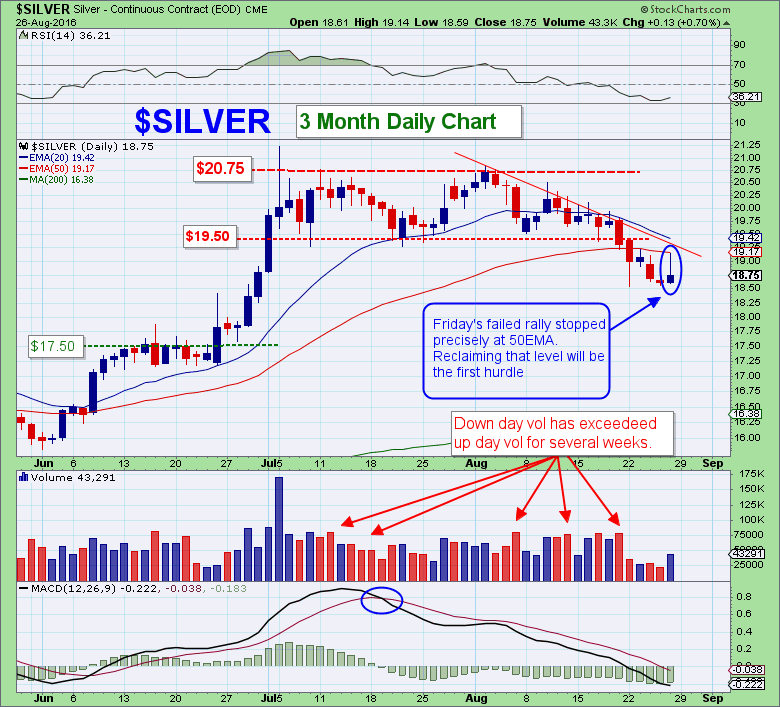 Mining stocks have been flirting with the $30 level since late June.

Getting back above $27.50 will be the first hurdle to clear.

With silver taking the brunt of the selling this week, we’ll take a closer look at the silver miners as measured by the SIL ETF.  Silver mining stocks have the potential for outsized returns at the expense of increased volatility.

SIL is resting just a skooch above the key $45 level and just below its 50MA, the first actual touch of the 50 since the breakout commenced in Jan. Below $45 lies support at $37.50 and significant support at $30.

I’ll be watching for signs of a reversal in silver itself and a buy signal in Trigger Trade Pro before attempting to “catch a falling knife.” 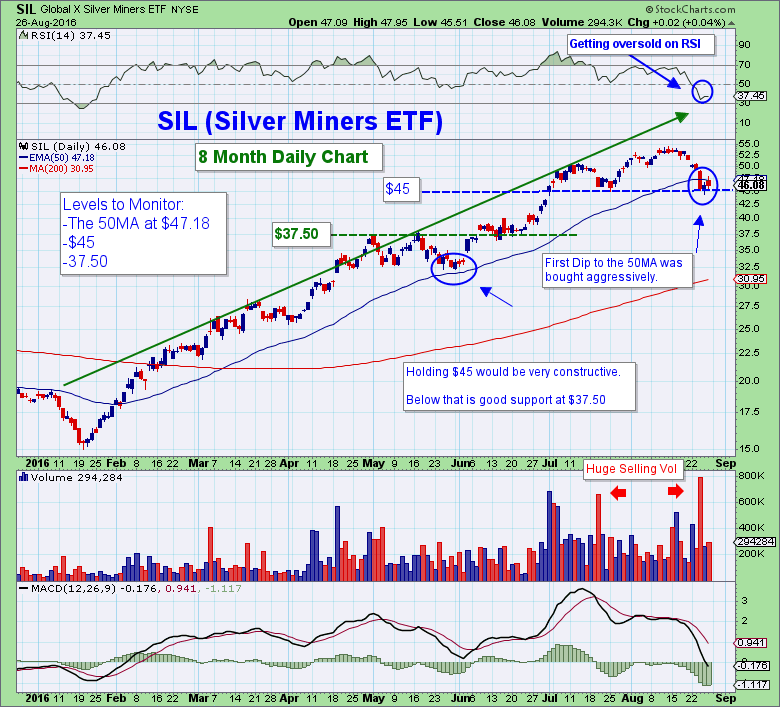 The CoT data remains at historic extremes with a small handful of large banking institutions holding enormous bets on lower metals prices.  The data is captured after Tuesday’s close and is not reported until Friday, so this data does not include the price action of Wednesday through Friday.

Recall that in 2008, it was the losses and margin calls of more than $2.5 billion of short COMEX contracts that were very likely the specific triggers that killed Bear Sterns.  JPMorgan inherited that short position when they took over Bear for $2 a share, and they remain the primary silver short.  Interestingly, they are also the custodian of the iShares Silver Trust (SLV), but that’s a rabbit hole for another day.

Above is a chart highlighting one of the many powerful trends being tracked at Follow the Money.  Gold and Silver mining stocks have had a tremendous run over the past 8 months.  Most impressive about FTM  and the Trigger Trade Pro system was the patience demonstrated in waiting for the trend to reverse before buying–something rarely taught.  The idea is simple; own things that are going up, not sideways or down, even if they are ridiculously undervalued as these mining stocks were (and are!).

We’re finally seeing a meaningful correction in the metals, led lower by the mining shares.  We’re just below the 50MA in gold, silver, and the mining stocks – levels that have proven opportunistic on previous dips.

While unpleasant in the short-term, these types pf pullbacks are healthy, allowing metals and shares to transfer from “weaker hands” to strong, while removing excess froth.  While not a prediction, seeing the metals go sideways for a bit, while holding above the key MAs, would solidify a new base and allow energy to build for the next surge higher.  If the market cared what I thought, I would suggest it to do exactly that.

The fly in the ointment remains the large short positions held by the commercial banks along with the failed rally attempt on Friday and the recent high volume distribution days.

The longer term fundamentals remain firmly intact.  The global petrodollar system is slowly fracturing as a new bilateral trade deal bypassing the USD is seemingly agreed upon each week.  Turkey appears to be pivoting toward Russia, which would diminish western control of energy supplies to Europe.  China is now in talks with Syria.  Sunni/Shia tensions in Saudi Arabia are threatening stability in the oil exporting behemoth.  Hostilities in the straight of Hormuz have resulted in shots being fired between Iranian and US ships.  North Korea is talking openly about nuclear war.  The Ukraine/Crimea/NATO/Russia conflict shows no sign of a diplomatic solution.  The European banking system is hanging by a thread.  Central banks come up with a creative new monicker for their money printing charades with each new day.  China is on a collision course with the US over the territory of the South China Sea.  A third of the world’s sovereign debt carries a negative yield.  There’s more, but you get the gist.

Meanwhile, the populace is coddled back to sleep by the soothing sounds of a rising stock market,  volatility near all-time lows and distracted with the latest political theatre, sporting event, or Pokemon craze.  Bread and Circuses.

I think I’ll hold onto my physical gold and silver.

Looking slightly ahead, there are several important events happening in the coming weeks.

These events will highlight the slow but steady and accelerating shift away from the USD as global reserve currency, and a shift towards China and the SDR.

“You will keep him in perfect peace, Whose mind is stayed on You, Because he trusts in You.” (Isa 26:3)