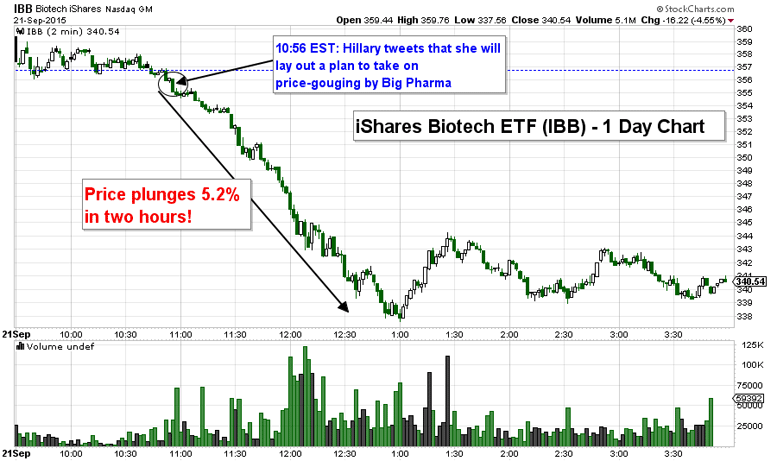 If you needed more proof that this overinflated stock market is filled with nervous Nellie investors, just take a look at today’s chart. It is a chart of today’s trading session of the iShares Biotech ETF (Ticker: IBB).

While we have been bearish on this ETF, and the entire biotech industry for several weeks, we didn’t expect this type of sell-off on a rather calm trading day. So what exactly caused today’s wipeout in biotech shares?

Price gouging like this in the specialty drug market is outrageous. Tomorrow I'll lay out a plan to take it on. -H https://t.co/9Z0Aw7aI6h

Put simply, Clinton has upped the ante against “Big Pharma” companies who have been price-gouging consumers for years… and she was no doubt playing up the anger caused by this morning’s news story about a hedge fund manager who jacked up the price on a critical drug by more than 5,000% after taking control of the company.

That investors sold out of biotech stocks so quickly tells us at least one of two things:

2) Or, they are overly sensitive to any negative news and are looking for reasons to sell

I believe both statements are somewhat correct. Despite her disastrous campaign, Clinton remains the clear frontrunner for 2016 and investors know it. But they also sense that the path of least resistance for this market is down and will sell on bad news… even if that bad news is a threat that couldn’t possibly materialize for over a year.

P.S. A couple of weeks ago I was joined on our FTMWeekly podcast by top global money manager and fellow trend trader, Puru Saxena. Listen as Puru explains why biotech stocks are due for a sharp decline here.