America’s Petrodollar System: A Timeline of the Rise and Fall of the U.S. Dollar

Last week, I spent a lot of time explaining America's petrodollar system over the course of several articles. (If you missed them, you can get started here.)

1933… The United States leaves the gold standard in the wake of the Great Depression. America outlaws private ownership of gold.

1944… A war-torn and financially decimated global economy agrees to make the U.S. Dollar the world reserve currency. This arrangement, known as the Bretton Woods agreement, pegs the value of the U.S. Dollar to a fixed amount of gold. The dollar/gold peg is set at $35 per ounce. This arrangement officially earns the U.S. Dollar the title of "world reserve currency", as it replaces the British Pound as the international medium of exchange. The gold-backing to the U.S. dollar helps to restore global financial confidence thereby bringing much needed calm to the tumultuous economic era. (By making the U.S. Dollar easily convertible into gold, it is soon considered "as good as gold.") Interestingly, despite this arrangement, it is still illegal for American citizens to own gold.

1972-1973… Without gold backing, Washington is concerned that global demand for the U.S. "paper" dollar could subside.

1973-1974… To maintain global dollar demand, Washington creates the petrodollar system. The first to enter this arrangement is Saudi Arabia. The Saudis agree to price all of their oil in U.S. dollars and even to invest some of their profits into U.S. Treasury securities. In exchange, the U.S. provides weapons to the Saudis, along with U.S. military bases to "protect" the Saudi oil fields.

Late 1970's… Washington makes similar deals with almost all OPEC nations. Those oil-producing nations who agree to denominate their oil in dollars and then invest their profits into U.S. Treasurys get weapons and "protection." The petrodollar system, created in the Nixon-Kissinger era, was likely one of the most brilliant economic moves in recent political memory. However, the system began breaking down around a decade ago.

2000… On September 24, Iraq's Saddam Hussein declares that his country will no longer price oil in U.S. dollars, but in euros instead.

2003… Iraq is invaded by the U.S. Iraq's oil supplies are removed from a "petro-euro" system back to a petrodollar system.

2005 to present… Iran, Venezuela, Syria, and North Korea (also known as the "Axis of Evil") threaten to move away from dollar-based oil transactions.

2011… Russia begins selling its oil to China in rubles. In tomorrow's article, I will give my final observations and commentary on the rise and fall of the U.S. Dollar.

1. INFLATION WATCH: Inflation in Britain jumped to its highest level in two-and-a-half years last month to 4.5%. Debate is growing on how long the Bank of England can keep interest rates low to support the flagging economy.

2. MARKET WATCH: U.S. stocks fell on Tuesday, with the Dow dropping more than 1 percent, as a disappointing outlook from Hewlett-Packard Co. and weak U.S. data added to growing doubts on the strength of the economy. The declines sent both the benchmark S&P and Nasdaq below their 50-day moving averages, a technical symbol indicating further market weakness is possible.

3. OIL FALLS : Benchmark crude for June delivery is trading below at $96.50 per barrel in afternoon trading on the New York Mercantile Exchange. The price of oil has dropped about 14 percent from a high of $113.52 on May 2.

4. GOLD SELL-OFF: Gold futures traded modestly lower Tuesday after an early rebound fizzled, with the metal feeling the pinch of a rising dollar and a selloff for other commodities. Gold for June delivery declined $7.80, or 0.5%, to $1,482.80 an ounce on the Comex division of the New York Mercantile Exchange.

5. PIMCO WARNING: The co-CEO of the world’s largest bond fund has warned America that it faces a combination of higher inflation, austerity, and financial repression over the coming years as policy makers grapple with the impact of the financial crisis and the subsequent policy response.

What will a cool $1 million fetch homebuyers in 2011? How much square footage? How many bedrooms and bathrooms? How big of a yard, if any yard at all? It all depends what city you’re buying in, of course. Click here to see what $1 million will buy you around America in 2011. 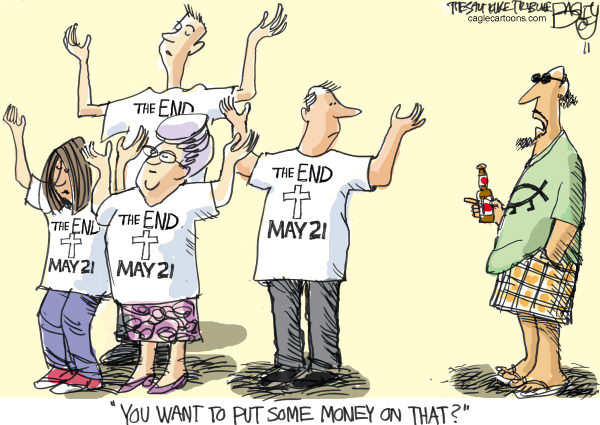