It seems that Americans are slowly becoming numbed to the word “crisis.” Whether it is a “financial crisis,” a “banking crisis,” or a “government spending crisis,” our nation seems to float from one crisis to the next as if it were a normal state of affairs. And while it is unfortunate, the roots of most of our crises lie in an inefficient use of resources. This is certainly true of America’s energy crisis.

Today, our entire global economic infrastructure — not just America’s — has been built and designed around petroleum-based products. Everything, from our apparel to our food and transportation, is dependent upon oil and its many by-products.  In fact, our entire way of life today would be virtually impossible without the amazing properties that we find within petroleum. Presently, there is no other known fuel that carries as much energy, per unit volume or per unit weight, as oil. Oil has become largely irreplaceable in today’s exploding global economy.

And while oil is amazing, it is no different than any other natural resource found within our earth’s crust. It is in a finite supply. Oil is a “non-renewable” resource which simply means that, as we use the earth’s oil supplies, the earth is not busy making more. Once it is gone… it will be gone forever.

However, I should be careful on this point because the truth is, the earth will never completely run out of oil. But as time goes by, the earth will run out of “cheap and easily accessible” oil supplies. That is what is currently happening. As the global economy continues to grow, credible sources are telling us that global oil supplies have “peaked.” This concept, that the earth’s oil supplies will become more and more difficult to obtain over time, is known as Peak Oil. (I will define and explain “peak oil” in more detail in our next article.)

For now, what you should know is that our world is moving dangerously close to a time when global oil demand will consistently outstrip the global oil supplies that are coming out of the ground. Of course, this can only mean one thing for oil prices: They will continue climbing higher in the long-term.

In Saudi Arabia there is a saying:

“My father rode a camel. I drive a car. My son flies a jet airplane. His son will ride a camel.”

In our totally oil-dependent world, it is vital that we begin major investments into alternative energy sources and in retrofitting our global infrastructure to accomodate other types of fuels besides those that are petroleum-based.

Sadly, there is very little momentum towards such an investment today. This lack of foresight — which has spanned decades — is positioning oil-producing nations (62% of proven global oil supplies lie under the sands of the Middle East) in a place of tremendous advantage as we march forward into an uncertain future.

Tomorrow: What You Should Know About the Threat of Peak Oil

1. NO PHOTO OF OSAMA: The White House is now saying that it will not release a photo of the mangled face and corpse of Osama Bin Laden, as it will pose a needless risk to national security… Conspiracy theories are picking up speed.

2. DOLLAR DROP: The dollar fell to a fresh three-year low on Wednesday and the euro briefly rose above $1.49 as weaker-than-expected U.S. employment data convinced investors that U.S. interest rates would remain low this year.

3. TEMP. RELIEF: Oil dropped Wednesday after a government report showed that supplies of petroleum products are growing as demand weakens in the U.S.

4. CAN YOU SPARE A DIME?: As China looks to diversify its cash reserves, the U.S. has its hand out…

5. INTERNET POLICE: A fiscally sick and bloated California is now seeking to “monitor” purchases made by consumers online in that state in an effort to collect more sales tax revenue.

Thanks to falling home prices and historically low interest rates, it is now cheaper to buy, than rent, in 80% of U.S. cities. Here’s a list of the top 10 cities where buying is cheaper.

It’s time to laugh a little. Here’s a sampling from some of the late-night jokers.

“Trump said that he hoped bin Laden suffered a lot. It looks like he got his wish, because the CIA said bin Laden spent his last hour watching “Celebrity Apprentice.“ –Conan O’Brien

“Starbucks is quickly becoming a popular place for thieves to steal iPads, laptops, and purses. It’s pretty crazy. I mean, can you imagine getting robbed while you’re just trying to pay $6 for a cup of coffee?” –Jimmy Fallon 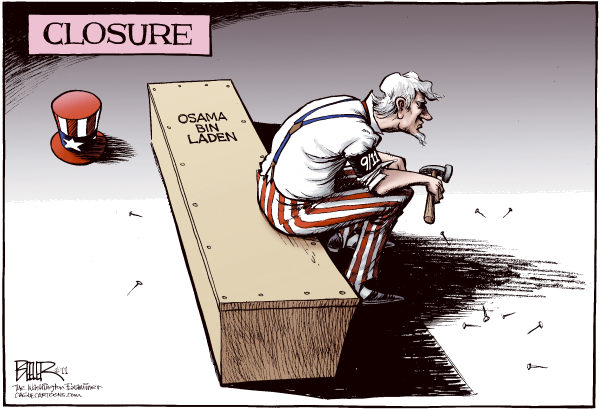