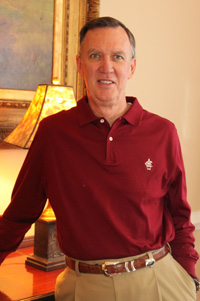 Thomas Cloud is the Chairman of the Board of Turamali, Inc. and has a long and successful advisory track record in both financial planning and tangible assets. His expertise as an financial counselor and thorough knowledge of the products he recommends has attracted an impressive list of individuals and major institutions from across the United States.

Since 1977, Mr. Cloud has devoted his attention to all areas of tangible asset investing, offering a “hands on” approach to each and every Turamali, Inc. client. A graduate of the School of Business of the University of Georgia, Mr. Cloud has been approved in six states to teach CPE credits to lawyers and certified public accountants. He has served on the American Council for Tangible Assets Board (ACTA), a national lobbying group in Washington (1984-87), and the Advisory Board of Intercap, Ltd. (1983-88), which was one of the world’s five largest money management firms. Additionally, he served on the Board of Directors of Willie Mays Enterprises, a financial consortium headed by Mr. Mays (1984-1994), and was selected to serve on the Advisory Board of Santa Fe Management, S.A., a prominent firm specializing in leveraged acquisitions and recapitalizations. Most recently, Mr. Cloud was appointed to the Board of Reference for the Christian Film and Television Commission. Further he is an active volunteer with the James Worthy Foundation for underprivileged children.