5 Reasons Why Silver Will Outshine Gold in the Long Run

(Originally published in the April 2010 issue of the FTM Quarterly newsletter.)

Silver was the first metal to be used as a currency more than 4,000 years ago. For millennia, silver has been viewed by the world as a form of money and as a store of value. For centuries, monetary systems around the globe relied upon the silver standard as an economic unit of account. According to Nobel Laureate and world-renowned economist, Milton Friedman, “the major monetary metal in history is silver, not gold.” Because silver is more reasonably priced, and therefore more accessible to the common man, it has been called the “poor man’s gold.” It has been said that “Gold is the money of kings; silver is the money of gentlemen; barter is the money of peasants; but debt is the money of slaves.”

And while gold was certainly used as money for centuries, it was not until around the 19th century that nations began abandoning the silver standard for a new gold standard. This move away from silver to gold was led primarily by Britain and the United States. The silver standard finally came to an end when the last two countries, China and Hong Kong, abandoned silver for gold. Silver has been viewed as money throughout most of recorded history.  In fact, in over 50 countries, the word for money is the same as the word for silver.

Over the last few years, the price of silver has been setting up and has become a viable investment opportunity. In this article, I will outline several reasons why I believe the price of silver may be set to explode to record levels over the next several months and years.

The Silver to Gold Ratio. The silver to gold ratio serves as a historical measure of the price difference between silver and gold. The ratio has been measured since the days of Ancient Greece. Interestingly, during the reign of the silver standard, silver and gold maintained a fairly stable and predictable price ratio of 15:1. In fact, this 15 to 1 silver to gold price ratio was legally fixed by the United States with the passage of the Coinage Act of 1792. Under this law, it meant that 15 troy ounces of silver could purchase one troy ounce of gold.

However, despite this stable historical ratio, the last several decades have witnessed a tremendous volatility in the silver to gold ratio. By 1900, the ratio had risen to 32:1. And by 1990, the ratio stood at an amazing 94:1. In late 2008, in the middle of the recent economic crisis, the silver to gold ratio peaked at a very high level of 84:1. And as of this writing, the ratio is around 62:1, which means that you can take delivery of over 60 ounces of silver before owning even one ounce of gold.

The important thing to note here is that silver prices are far from their historical and traditional norm of 15:1. This dramatic shift in the price ratio raises an important question for would-be silver investors: Have modern markets determined that the historical ratio of 15:1 is irrelevant due to fundamental changes in silver and gold? It is important to note that the 15:1 price ratio is a very simple technical indicator that measures shifts in the underlying fundamentals of the two metals. So let us next turn to examine some of the fundamentals of silver to see if the shiny metal is deserving of its uncharacteristically low price.

Increasing Industrial Demand.. Today, emerging nations are devouring global commodities at a record pace. Nations like China, Brazil, Russia, India, Vietnam, and others are forecast to continue their rapid economic growth in the coming years and decades. As they grow, their appetite for commodities will grow right along with them. Typically, the commodities that come to mind when thinking about demand from emerging nations are oil, copper, etc. Many do not think of silver in terms of its industrial demand. However, silver is a primary component of photography, water filters, band-aids, batteries, solar energy cells, and jewelry, among many other uses. In addition, silver has been dubbed the “healthy metal” due to its numerous healthcare and medical applications. And because of silver’s excellent electrical conductivity, it has numerous applications in electronics. The large list of electronics requiring silver include: computers, circuit boards, cell phones, televisions, RFID tags, and PDA’s, just to name a few. To understand why industrial demand for silver will continue growing in the future, simply think of the roughly two billion people around the world who currently do not have cell phones or laptops, but want them.

Due to increasing industrial demand for silver, we agree with most forecasts that silver prices will rise to meet the growing demand.

Increasing Investment Demand. In addition to serving as a chief industrial metal, silver is also a monetary metal. Thus, investment demand for silver as a monetary metal has risen dramatically over the last several years. Much of this investment demand for silver has been from global investors seeking diversification in their portfolios, most of which have been over-weighted with paper assets. This newfound investment demand for hard (tangible or non-paper) assets has been primarily rooted in the continued decline in purchasing power of many global currencies. Authoritative financial experts and commentators, such as Alan Greenspan, George Soros, Jim Rogers, Peter Schiff, and others, have warned that paper currencies will continue to lose value over time. This decline is rooted in the poor monetary policies enacted by central bankers around the world. Of course, precious metals, such as gold and silver are some of the prime beneficiaries of poor monetary policy. This explains, at least in part, the increasing investment demand for silver. As governments and central banks increasingly appear willing to continue printing more money as a solution to the global economic crisis, many investors rightfully fear the end result will be hyperinflation. Again, precious metals, such as silver, would be direct beneficiaries of any such hyperinflation.

Additionally, the recent introduction of exchange-traded funds (ETF’s) that track the price of silver has lowered the costs of entry into the silver market and has eliminated the need for safety and storage concerns. Two popular ETF’s among investors are the ETFS Physical Silver Shares (SIVR) and the iShares Silver Trust (SLV).  Since these ETF’s actually hold physical silver, their increasing popularity among investors directly, and positively, impacts investment demand for silver.

One final note on the growing investment demand for silver comes from the Far East. After decades of dissuading its citizens to purchase precious metals, China has done a complete about face. For the last three years, China has been using its state-run television to promote precious metals as a wise investment opportunity to its citizens. In particular, China is recommending silver as an “undervalued asset” that could provide individual investors with a “good way to cash in” as they expect prices to go much higher.

While the U.S. government has been urging its citizens to purchase its own worthless paper debt, the Chinese government has been urging its citizens to invest in hard assets. The Chinese government’s pronouncement is far from hypocritical, as they have been taking their own medicine. China has shocked the investment world over the last few years by increasing its own gold reserves by 76% since 2002. By urging its own 1.3 billion citizens to purchase silver, China is sure to continue driving demand for precious metals, such as silver, for years to come.

Global Silver Production and Supply. It has been estimated that in 1900 there were 12 billion available ounces of silver in the world. According to the commodities research firm CPM Group, this number dropped dramatically to around 2.2 billion ounces by 1990. Today, the amount of above ground refined silver has fallen to less than 1 billion ounces. Obviously, global demand for silver is outpacing the world’s silver production capabilities.

Silver’s numerous uses in industry coupled with growing global investment demand, have created a consistent demand that has been outstripping supplies for more than five decades. As the old saying goes, “Gold is hoarded but silver is consumed.” Almost all of the gold that has ever been mined since the beginning of time is still available in bullion form today. In contrast, almost all of the silver (90%) that has been mined has been consumed in its various industrial applications. This is true due to the price differentiation between the two metals. Because of gold’s much higher value, it is recycled and restored to bullion form. However, because of silver’s relatively inexpensive price, it is often cost-prohibitive to recover and recycle silver in many of its forms. This is not to say that silver is not recovered and recycled, however. Of the total global silver produced annually, 20% is the result of recycled silver.

What makes silver somewhat unique and unusual is that its price is highly inelastic. Historically speaking, this means that silver production is not directly affected by increasing silver prices. For example, in the last great silver bull market when silver prices were up by 2400%, the production of silver was minimally affected. This is not to say that this trend will continue. However, it is a historical fact that should be considered by new investors.

Like other non-renewable resources, silver is in finite supply and production has not been able to keep up with global demand.

Economic Uncertainty. The global economic crisis has shaken the faith of many investors in paper based assets. Many governments, led by the United States, have turned in unison to relieve the negative economic pressure by inflating their monetary base and cutting interest rates. For example, in 2008 the Federal Reserve increased the U.S. monetary base from just over $800 billion to $1.7 trillion in a matter of months. Additionally, the Fed has been holding interest rate targets at artificially low levels in an effort to spur a consumption-led recovery. History is replete with lessons on where this type of monetary policy leads. All of this money printing and low interest rates are a recipe for monetary disaster through massive inflation. 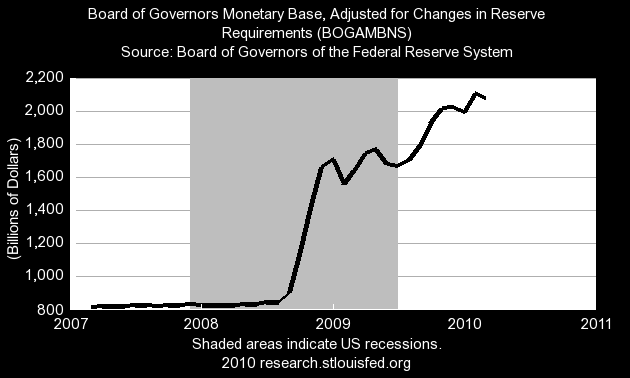 Many investors realize that precious metals, such as gold and silver, are the chief beneficiaries of poor monetary policies. In times of economic crisis, investors flock to gold and silver as an inflation hedge. But investors have typically bought gold for wealth preservation, and silver for wealth “accumulation.”

Silver is rare, inexpensive, a protection against inflation, and possibly poised for one of the best bull runs in history. The following variables are making silver a potentially excellent investment: An out-of-whack silver to gold ratio, increasing industrial and investment demand, declining production and mining output, and future economic uncertainty. We forecast that over the next few years, silver will continue to provide investors with the best of both worlds: an inflation hedge with large investment returns.

Learn more about our 2011 price forecasts for silver and gold in our latest FTM Quarterly newsletter.

(This article was originally published in the April 2010 FTM Quarterly newsletter. Our subscribers receive our quarterly newsletter which contains 24+ pages of financial forecasts and strategies. In addition, they have full access to our entire investment portfolio, including instant email alerts when we “buy” or “sell” within our own portfolio. To learn more, click here.)