THE YEAR OF REAL ESTATE? 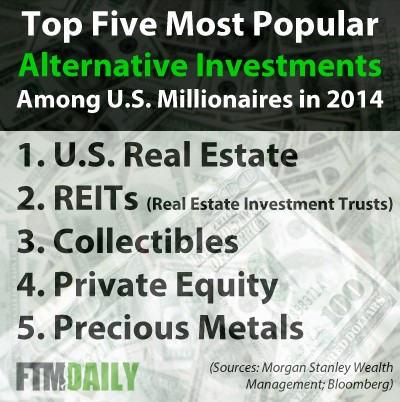 According to a recent survey released by Morgan Stanley, a majority of U.S. millionaires expect real estate to be best alternative investment to own this year. According to Bloomberg:

“About 77 percent of investors with at least $1 million in assets own real estate, according to a survey released today by the New York-based investment bank’s wealth-management unit. Direct ownership of residential and commercial properties was the No. 1 alternative-investment pick for 2014, with a third of millionaires surveyed saying they plan to buy this year. Twenty-three percent said they expect to invest in real estate investment trusts, the second-most popular choice.”

After the massive run-up in stocks in 2013, it appears the nation’s smart money may begin moving money from an overvalued stock market into both U.S. residential and commercial real estate.

Certain types of commercial real estate properties are being eyed by wealthy investors:

While FTMDaily does not foresee a massive upside for U.S. real estate prices as a whole in the coming years, we expect the the rental market in the U.S. to remain robust. America’s consumer debt levels — especially the $1 trillion+ student loan debacle — threaten to turn the nation into a land of lords and serfs.

Some worry that U.S. real estate is either in — or is nearing — bubble territory. But my reading of the data doesn’t point to an existing bubble. Consider this 10-year chart of new home sales in the U.S.

That doesn’t look like a bubble, but instead a long and protracted emergence from a credit bubble-inspired crash. (Sure, places like Las Vegas and Phoenix look frothy. But there are plenty of other places, especially in the Midwest, where prices are just right for those seeking long-term cash flow.)

Against a backdrop of rising interest rates and tightened credit standards, overall home sales will continue to struggle in the years ahead. This spells opportunity for those who are eager, not so much for capital gains, but for cash flow. Rental real estate, when purchased correctly, can lead to a lifetime of dependable cash flow. Additionally, this rental income is not fixed, but flexible: Raise the rent payment and raise your income. In this respect, rental real estate, when purchased for cash or on a fixed interest rate loan, can provide real and lasting protection from inflation.

In the final analysis, we view the purchase of U.S. rental real estate in select areas of the country as a wise move in 2014.

Want to learn more about real estate investing? FTM Insiders have access to our entire library of income and investment ideas. 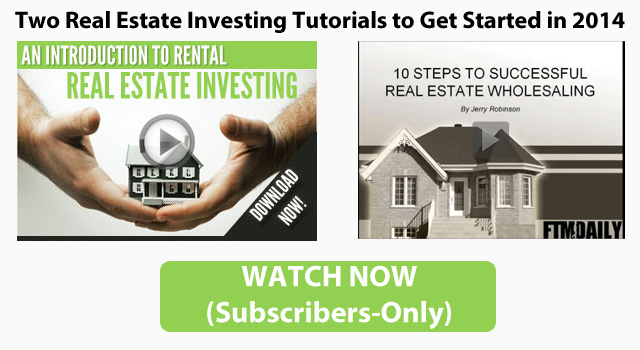 Become an Gold member today for only $1! (Click here for details)

RELATED READING
Self Storage Investing: 4 REITs for Income Investors
How the Student Loan Crisis is Changing My Real Estate Investment Strategy
Boost Your Portfolio with REITs

Gold extended its 2014 rally, climbing to a three-month high as speculation that U.S. stimulus will continue boosted the appeal of alternative assets.

You have a chance today to buy into relatively cheap European stocks before the ECB unleashes one of their economy-boosting “big bazookas.”

WTI Crude Oil at Highest Since October on Cushing Stockpiles

Cocoa Surges to Highest Since 2011 on Signs of Robust Demand

Just in time for Valentine’s Day…

Cyclical commodities, especially platinum, copper and silver, are the most popular commodity plays among investors in 2014. (FTM Insiders: Hear what Precious Metals Expert, Tom Cloud, is saying this week about the precious metals market.)

Neither the United States nor Israel has ruled out military action to prevent Iran from developing a nuclear weapon, if diplomacy fails.

Palestianian Authority: Western Wall Must Be Under Our Rule

Palestinian Authority’s Religious Affairs Minister said Jerusalem’s Western Wall, the holiest site in Judaism outside the Temple Mount, must be brought under Palestinian sovereignty in any upcoming peace agreement between Israel and the Palestinians.

Secret NSA Satellite Facility Located at IDF Base in Jerusalem

“There appears to be no reason for Israel to attempt to penetrate U.S. security as we’re willing to give them the store.”

Norway to Follow in Switzerland’s Footsteps with Immigration Vote?

Inspired by Switzerland’s immigration vote, which has infuriated the European Union, one of Norway’s ruling parties is calling for the country to hold its own referendum on limiting immigration from the EU.

Documents from an Ohio National Guard training drill conducted last January reveal the details of a mock disaster where Second Amendment supporters with “anti-government” opinions were portrayed as domestic terrorists.

The United States’ new press freedom ranking comes on the heels of a new and dangerous campaign against Glenn Greenwald and other journalists who have reported on the documents leaked by former NSA contractor Edward Snowden.

Sophisticated new 360-degree lenses embedded in the ceilings and walls of the buses will now capture everything.

“A false balance is an abomination to the LORD, but a just weight is His delight.”
Proverbs 11:1