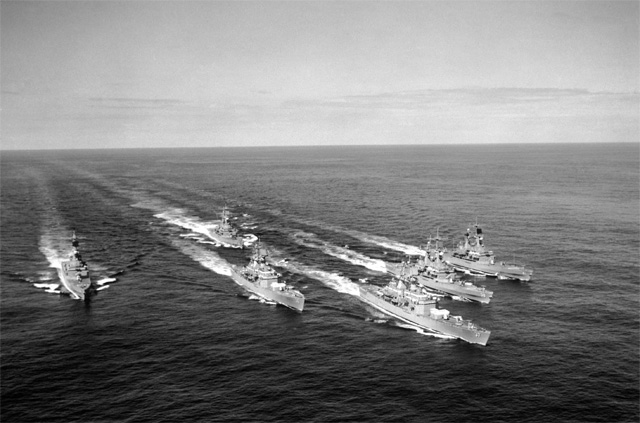 Iranian warships have been ordered to approach U.S. maritime borders in the Atlantic Ocean for the first time, according to a senior Iranian naval commander.

The mission of the naval fleet, which will reportedly last for three months, is to send a “message.” What’s the message? That Iran has grown weary of Washington’s “beefed up naval presence in the Persian Gulf.” Iran, of course, is referencing the presence of the U.S. Navy’s 5th fleet in Bahrain, just across the Persian Gulf from Iran.

This is the just the latest provocation between Washington and Tehran in recent days.

– On Friday, Iranian state TV ratcheted up its anti-American rhetoric by running a documentary showing a computerized re-enactment of Iran’s drones and missiles being launched on Israeli and U.S. targets. In particular, the video showed the Iranian military bombing Tel Aviv, Haifa, the Ben Gurion Airport and the Dimona nuclear reactor. The video also showed the Iranian military carrying out simulated strikes on a U.S. aircraft carrier and other U.S. military targets in the Persian Gulf. Later, another Naval commander vowed to sink U.S. warships.

Treasury’s Lew: Borrowing Authority May Not Last Past Feb. 27

Extraordinary measures used by the Treasury to keep under the debt ceiling “are likely to be exhausted in less than three weeks,” Lew said today in a letter to House Speaker John Boehner, a Republican from Ohio.

Bitcoin has plunged more than 8 percent after a Tokyo-based exchange halted withdrawals of the digital currency, citing technical malfunction.

Massive Security Breach at Barclays Exposes the Personal Data of Over 27,000 Bank Customers

Cache of personal and financial details stolen and sold to rogue traders as Barclays now faces unlimited fines for not protecting customer information.

Chinese investors bought out a record 120 European companies in 2013, many of them German or British companies, according to a report by Ernst & Young.

Congressional Budget Office: “Beyond 2017, CBO expects that economic growth will diminish to a pace that is well below the average seen over the past several decades [due in large part to] slower growth in the labor force because of the aging of the population.”

Washington has publicly rebuked China for its role in creating tensions within the Pacific region and is warning that additional U.S. military forces are on stand-by and will be sent to the region if Beijing presses ahead with a declaration of a new air defense zone in the South China Sea.

Israel Said Willing to Give Up 90% of West Bank

A “deal” is apparently getting close…

The Australian government has confiscated passports in an effort to prevent attacks by returning fighters.

The Swiss people have voted to reintroduce limits on immigration in a stinging rebuke of the Swiss government, Swiss industry, and especially the EU.

The memory project is part of President Barack Obama’s BRAIN initiative, which funds research that seeks to find treatments for some of the most common brain disorders, such as Alzheimer’s and brain injury.

Why Global Water Shortages Pose Threat of Terror and War

U.S. intelligence is warning of the dangers of shrinking resources and experts say the world is ‘standing on a precipice’

Hollywood Earthquake is Third in 10 Days

The region, which has historically suffered a large earthquake every 150 years on average, remains well overdue for the “big” one.

America is a great land and lures immigrants worldwide, yet record numbers of U.S. citizens and permanent residents are giving up their citizenship or residency.

“The official currency of the Russian Federation is the ruble. Introduction of other monetary units and money substitutes is prohibited.”

The new plan will supposedly be used to clamp down on large-scale tax evasion.

EU to Force Britons to Publish Details of Wills and Property

Signs of a coming European “bail-in?”

Instead of searching for actual criminals, Kentucky State Police will be on the lookout for people who eat while they drive as part of Operation RAID, which will include checkpoints targeting “distracted drivers.”

“He who is generous will be blessed, for he gives some of his food to the poor.”
Proverbs 22:9