Weekly Metals Report: Where to From Here?

Welcome to Follow the Money’s Weekly Metals Report for the week of September 12, 2016!

Last week we discussed how the Fed engages in what is officially called Open Market Operations.  This week, another less official Fed policy tool was on full display: Open Mouth Operations.  The playbook this week was to trot out a handful of Federal Reserve officials to talk about how the economy is strong and that a rate hike is plausible at the meeting on September 21st.  It’s a sorry state of affairs when a small cadre of consistently wrong academics can influence markets around the world with a few carefully crafted statements.  While anything is possible, logic dictates that a September rate hike is unlikely for all of the reasons mentioned in previous weeks.

Those bullish on the metals believe the Fed is bluffing about a rate hike in September and will find some sort of excuse to delay…again. The Federal Reserve has a dual mandate of maximum employment and price stability.  Both metrics are below stated targets and taken in conjunction with a slew of other poor data, it’s reasonable to assume they will postpone, especially considering the political implications.  If the broad market selloff that began on Friday gains momentum, that may provide the cover needed to delay or even reverse course and discuss some sort of easing.  There have been zero rate hikes in 2016, and after last December’s measly 25bps increase, the markets went into free fall.  If some version of the above scenario plays out and the market finally recognizes that the Fed is trapped, watch for a sharp rise in the metals and a fall in the dollar, as expectations are forced to rapidly realign.  That would likely provide the needed catalyst to propel the metals above their recent $1375/$20.75 ceilings.

Bears make the valid point that the Fed will look incredibly foolish if they fail to hike after the relentless talk about doing so.  A small handful of commercial banks (“smart money”) hold record short positions in both metals, and the managed money category (“dumb money”) is holding record long positions.  The big banks don’t play nice with others when things don’t go their way and often exert influence to move markets in their direction.  Also, fifty percent retracements, after a move like we’ve seen since January, are not uncommon.  Such a pullback would bring gold back near $1200, silver near $17 and GDX $22.

My strong inclination is that a version of the above bull case will prevail, but the truth is that the market is not concerned with my inclinations.  Price, volume, and trend analysis serve as our best leading indicators.  For trading purposes, it’s best to set personal bias aside–something I find challenging!  Remaining cognizant of both possible short-term outcomes can help to balance emotions and prevent making unwise decisions.  Markets can often remain irrational longer than we can remain solvent.

After the spike higher on Tuesday and subsequent selloffs on Wednesday, Thursday, and Friday, the metals closed little changed this week.  For the week, gold was up $7.80, silver was unchanged, platinum was up $5.30, and GDX down $0.94.  Tuesday’s rally came on strong volume, while the rest of the week’s decline came on modest volume.  Gold and silver closed the week just above their 50EMA, while GDX closed below the 50EMA.

Unlock Charts as a Member

As frustrating as it may be, the near term direction of the metals appears to be subject to the carefully orchestrated statements of Federal Reserve officials and the market's interpretation of whether a rate increase is forthcoming.

The short-term direction is not entirely clear and I don't want to allow "gut feelings" to pass for thoughtful analysis.  There are times that waiting patiently on the sidelines for more clarity is prudent, and this may be just such an occasion.  The immediate trading setup, especially for leveraged plays such as NUGT, DUST, JNUG, and short-term options, offers a poor risk/reward profile, in my opinion.  I would not be the least bit surprised -nor concerned- by a retest of $1300-$1308/$18-$18.50.  In fact, a high volume bounce of those levels would be highly encouraging. 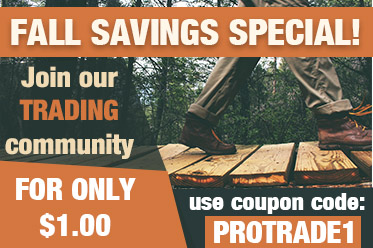 The long-term uptrend is firmly intact and the fundamental case for significantly higher metals prices has never been stronger.  Also, the insurance that physical gold and silver offer against the economic, social, and geopolitical storm clouds that are gathering on the horizon has never been more critical.  The inevitable train wreck between a populace dependent on the commitments made by politicians and their corresponding inability to deliver on those promises is getting closer by the day.  There will be a lot of shocked and unhappy campers once that realization sets in.  Sadly, many will be caught flat-footed.  FTM members have at their disposal a plethora of tools and resources to navigate these challenges with wisdom.

I also want to briefly mention a promotion that Follow the Money is offering for the month of September.  Use promotion code PROTRADE1 to get your first month of membership for $1.  I was a member long before writing this column and have personally found incredible value in being a member of the FTM community.  Needless to say, I believe many of you would as well.

"The good is always the enemy of the best" -Oswald Chambers, My Utmost for His Highest

"The test of a first-rate intelligence is the ability to hold two opposed ideas in the mind at the same time and still retain the ability to function.”  -F. Scott Fitzgerald

"You can avoid reality, but you cannot avoid the consequences of avoiding reality." - Ayn Rand