The Case for Investing in Natural Gas

HOUSTON, APRIL 19 – For several years, I have had high hopes that natural gas could provide a way for America to wean itself off its dependency on foreign energy supplies. Not only does natural gas offer our nation an energy source that is domestically produced, it is also abundant. It is estimated that the United States sits atop more natural gas than Saudi Arabia has oil. Today, America is using exploration techniques which were considered uneconomical just a few years ago, including horizontal drilling and hydraulic fracturing (or “fracking”). Thanks to these advanced techniques, the U.S. is currently experiencing a natural gas revolution.

In 2009, the U.S. surpassed Russia as the world’s largest producer of natural gas. And in 2011, U.S. natural gas production grew by the largest one-year volumetric increase in our nation’s history. According to the American Gas Association, the U.S. has approximately 300 trillion cubic feet in national inventory of reserves – the equivalent of a 100 year supply based on current domestic consumption levels.

In addition to being a domestic national resource in abundant supply, natural gas is a cleaner burning energy source that produces fewer emissions than other forms of energy like coal. Obviously, this clean and abundant form of energy, which is produced domestically, has been a major source of job creation. Keeping up with various technologies and explosive growth of the industry will require many more highly paid skilled workers.

But despite all of this good news for America’s energy future, there is currently a major dilemma facing the industry. You see, as this burst of new drilling for natural gas throughout the country has occurred, the domestic supplies of natural gas are starting to pile up. Over the last twelve months alone, natural gas supplies have risen by an astonishing 56%. (Our unseasonably warm winter didn’t help matters and actually made the surpluses worse.) Over the last several months, natural gas prices have fallen below $2 per MMBtu. Prices have not fallen this low since 2002. In recent weeks, new concerns have emerged over whether there is sufficient storage capacity to hold the vast supplies of natural gas before the next heating season hits. If current capacity constraints were to be exceeded, this would be devastating to the price of natural gas and could send prices plummeting…even lower.

With domestic natural gas in plentiful supply, and at a decade-low price, the case for shifting away from our nation’s dependency on expensive foreign oil to natural gas is obvious. Of course, to do so will require converting much of our nation’s oil-based infrastructure to one that can run on natural gas. While the conversion costs would be immense, the infant industry would create hundreds of thousands of new jobs, which would also drive up federal, state, and local tax revenues. While we have witnessed the beginning of this conversion in recent years with more automobiles powered by compressed natural gas (CNG), it is not enough. Our nation’s current energy policy is incoherent and has been clogged up with the conflicting interests of corporate and environmental lobbyists. We need solid leadership at America’s highest levels that will permit the needed innovations to be unleashed for this inevitable conversion to natural gas. This will require less regulation and more incentives.

One group that greatly benefits from these low natural gas prices is the U.S. manufacturing industry. Lower natural gas prices are giving them an advantage over foreign competitors who pay upwards of $10, and even $20, for natural gas. Prices are especially high in much of Asia and Europe. Japan and Germany, in particular, have both become more heavily dependent upon natural gas imports to an even larger extent in the wake of the 2011 Fukushima nuclear meltdown. Because this trend of growing global natural gas demand is not expected to change anytime soon, it will mean that many countries will be in search of long-term access to cheaper gas supplies. With our cheap and abundant natural gas supplies, America could exploit this growing global demand by developing an export strategy. Natural gas, which is exported by sea on large ships, must first be liquefied (known as LNG, or liquefied natural gas) before it can be exported. But exporting LNG has become a tense issue.

The tension revolves around the central argument of whether the U.S. government should grant permits allowing domestic natural gas producers to export their commodity around the globe. On one side of the argument, the natural gas producers are experiencing a severe surplus, pushing the price to the current low levels. These producers would enjoy the ability to ship their product overseas to willing buyers (remember many foreign companies pay $10-$20 currently). Environmental groups and their lobbyists, however, claim the rush to profit from LNG exports will only encourage more damage to the ecosphere. Fear over the link between global warming and the burning of fossil fuels has even led to the creation of a Congressional bill seeking to bar federal approval for LNG exporting activity until 2025. But with crude oil prices elevated, and prices at the pump rising, saving money will likely take precedence over saving the environment. For example, consider the T. Boone Pickens Plan which calls for converting the entire U.S. fleet of 18-wheeler semi trucks from oil-based gasoline and diesel fuel to Compressed Natural Gas. This shift alone would reduce oil imports by 2 million barrels per day.

Domestic industries, too, complain the inevitable rise in natural gas prices will harm business by leading to increasing prices and more layoffs. These manufacturers will be deploying the full force of their lobbyists in Washington in order to keep this competitive edge over foreign competitors.

And then, of course, there is Washington. As the final arbiters of such a new and “radical” export policy, their approval is required for nearly any matter these days. Currently, there is only one U.S. energy company who has government approval to export the liquefied form of natural gas to foreign countries: Cheniere Energy (Ticker: LNG). (And if our radar is accurate, no companies will be added to this “approved exporters” list until after the 2012 presidential election, as the topic is too contentious.) Back in May of 2011, Cheniere Energy received a license from the U.S. Department of Energy to export LNG from its Louisiana-based Sabine Pass LNG terminal. The Sabine Pass terminal, originally constructed as an import terminal, is now being retrofitted as an export terminal. Cheniere expects to begin its LNG export operations in 2016. A report by Barron’s estimates that by 2017, the U.S. could be the world’s largest LNG exporters, with upwards of 13 billion cubic feet of LNG exported per day. (Right now Qatar holds that title. And Australia is another big player in LNG exports.) 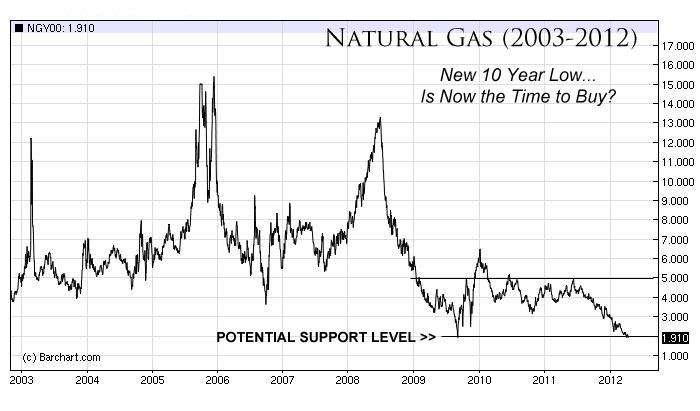 My analysis: With prices currently below $2 and demand growing, U.S. natural gas prices will eventually stabilize at a much higher equilibrium price. Currently, the futures market is predicting an average price of $3.50 in 2013. This is a risky play however, with many pitfalls. My investment into natural gas is a long-term play. Personally, I will be dollar cost averaging in my risk capital throughout the year, beginning in May. By buying in slowly, I am protecting my investment in the event that prices drop to $1 sometime this year. (This could definitely happen, especially if a report is issued that storage capacity has been exceeded.)

The above article is an excerpt from our Spring 2012 FTMQuarterly Investment Newsletter. To learn more, click here.

Jerry Robinson is a leading authority on the petrodollar system and global economic issues. He has spoken on the petrodollar system and global economics around the United States, in Europe, and in the Middle East. He is an Austrian economist, published author, columnist, international conference speaker, and the editor of the financial website, FTMDaily.com. In addition, Robinson hosts a weekly radio program entitled Follow the Money Weekly, an hour long radio show dedicated to deciphering the week's economic news. For media inquiries, click here.