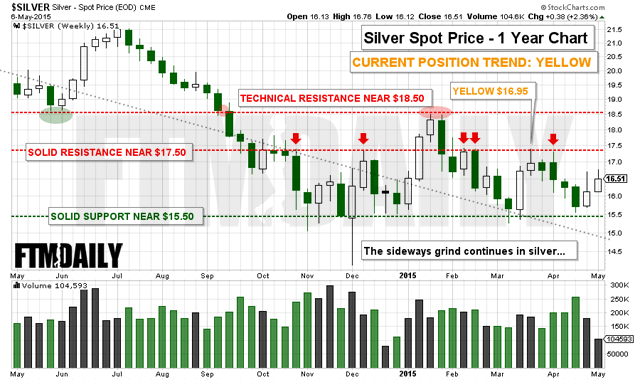 CHART: Here’s All You Need to Know to Profit From Silver’s Next Explosive Move

I’ll admit it. I am a huge fan of silver.

I personally own silver and believe that most investors should consider it for their own portfolios.

Silver has long been known as the “poor man’s gold.” Unlike gold, a single ounce of silver can be purchased with a $20 bill. (In fact, at its current price of just $16.51 per ounce, you would even get some change back.)

In fact, silver is so cheap that we haven’t seen prices this low since 2010.

As you can see in the above detailed chart, silver prices have recently found solid support near $15.50. If silver falls through this level on a weekly chart, then the current downtrend is likely to continue.

However, if silver prices can break out above the current resistance level of $17.50, things could really begin to improve.

But it is the $18.50 level that I am watching very closely. This is an important and historic level in silver. 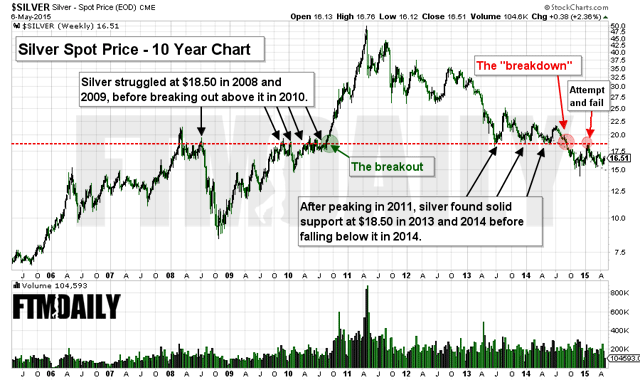 But after silver peaked out in 2011, it began its current downtrend. In both 2013 and 2014, silver found solid support at $18.50. (This is typical as former areas of resistance can often later turn into key areas of support.)

Finally, in mid-2014, silver prices became weak enough to collapse through this key support level of $18.50.

You can find more of our free resources on precious metals here.

P.S. If you are a precious metals investor and want detailed charts on gold, silver, palladium, platinum like the ones above delivered to your inbox every week, consider joining our community here.