Why Goldman Sachs is Wrong About Gold

Goldman Sachs is telling its clients that gold prices may have already peaked and that they expect prices will decline next year.

This week, the behemoth investment bank lowered its 2013 price forecast for gold claiming that an increase in real interest rates and positive economic growth numbers next year will prevent the Federal Reserve from pumping anymore money into the U.S. economy.

A note to Goldman clients stated:

“Medium term however, the gold outlook is caught between the opposing forces of more Fed easing and a gradual increase in U.S. real rates on better U.S. economic growth. Our expanded modeling suggests that the improving U.S. growth outlook will outweigh further Fed balance sheet expansion and that the cycle in gold prices will likely turn in 2013.”

While it is true that gold prices have run into some resistance over the last several months, the fundamentals that are driving gold higher have not changed.

Global central banks continue to print currency while buying large amounts of gold. China and India remain large buyers of the yellow metal. And individual investors in the U.S. are just beginning to warm up to precious metals as a viable investment through ETFs.

None of the structural problems facing the U.S. economy have been resolved. Tensions abound in the Middle East and in Central Asia. Europe is a wreck and the UK is facing an ongoing recession. Meanwhile, the U.S. dollar is losing its preeminence in the global economy.

Therefore, I believe to call a top in gold here is unwise. 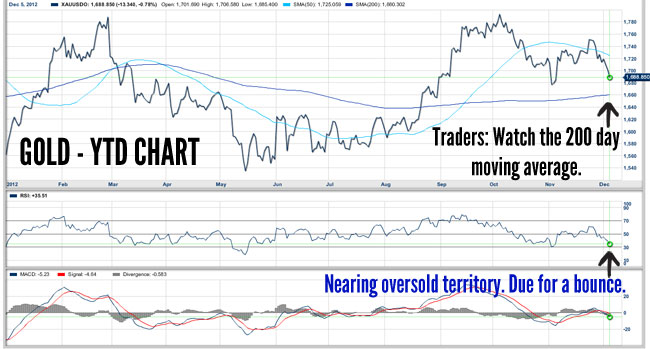 END_OF_DOCUMENT_TOKEN_TO_BE_REPLACED

Segment 1: Are You Prepared for an Emergency? SEGMENT BEGINS AT 00:47 We have stressed the importance of preparation for many years here at Follow The Money. Jerry Robinson devotes this segment to urging listeners to implement a solid plan to protect themselves and...